The select few Americans who have achieved the distinction of sainthood in the Roman Catholic Church were almost all missionaries and, with a few exceptions, virtually all of them were women.  Five extraordinary women, all nuns, served the Church in the United States by creating and expanding religious orders, leaving a trail of schools, hospitals and missions in their wake.  Their collective impact on the Church in America has been both profound and long-lasting.  Their shrines have become important places of Catholic pilgrimage in the United States. 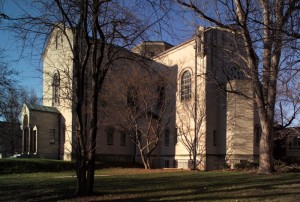 Rose Philippine Duchesne was a French nun who immigrated to the United States in the early 19th century.  Born in 1769, she was a member of the Order of the Visitation of Holy Mary until its dispersion during the French Revolution and Napoleanic era.  She later became a member of the Society of the Sacred Heart.  Duchesne moved to the United States in 1818, where she traveled the Louisiana Territory establishing new chapters of the Sacred Heart, the first outside of France.  She also worked to improve the living conditions of local native American tribes.  Sister Duchesne died in 1852 and was canonized in 1988.

The Shrine of St. Philippine Duchesne is located in St. Charles, Missouri on the grounds of the first academy that she founded.  Her relic is kept in a church that was built in the 1950s.  An earlier, smaller shrine where her body was previously interred still stands in front of the school.  Within the school can be found the cell where she lived during the last few years of her life.  Rose Philippine Duchesne’s feast day is celebrated on November 18. 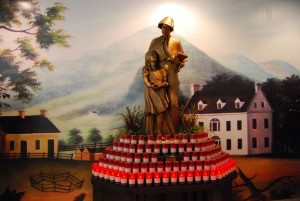 Elizabeth Ann Seton was the first saint of the Roman Catholic Church to be born in what would become the United States.  Born into a Protestant family in New York City in 1774, Seton had a relatively normal and uneventful life until the death of her husband in 1803.  After this traumatic event, she converted to Catholicism and relocated to Maryland where she established a school for Catholic girls.  She went on to found the Sisters of Charity of St. Joseph with the purpose of serving the poorer children of the community.  Mother Seton died in 1821 and was canonized in 1975.

The National Shrine of St. Elizabeth Ann Seton in Emmitsburg, Maryland is located on the site where Seton established her first school.  The site is home to a full basilica as well as a visitor’s center and museum.  Also on the site of the shrine are several of the original buildings of the school and community, including the Stone House, the White House and the Mortuary Chapel.  Elizabeth Ann Seton’s feast day is celebrated on January 4. 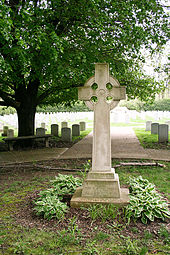 Anne-Therese Theodore Guerin was another nun from France who traveled to the New World to pursue her calling in America.  Born in 1798, she became a member of the order of the Sisters of Providence of Ruille-sur-Loire and served with them for many years.  In answer to the desperate need for Catholic teachers in the United States, she and five companions moved to Indiana in the 1840s.  There she founded orphanages and schools, including the future Saint-Mary-of-the-Woods College.  Mother Theodore died in 1856 and was canonized in 2006.

The National Shrine of St. Mother Theodore Guerin is located on the grounds of the Mother House of the order which she founded in St. Mary-In-The Woods, Indiana.  Her relic is kept in the Church of the Immaculate Conception.  Next door to the church is a museum with exhibits on the life of the saint and the history of the order.  Theodore Guerin’s feast day is celebrated on October 3.

Francesca Xavier Cabrini was the first American citizen to be proclaimed a saint.  Born in Italy in 1850, she later added Xavier to her name in honor of her hero, the famous missionary Francis Xavier.  Although she desired to follow in his footsteps and work as a missionary in China, Cabrini instead went to America at the personal request of the Pope.  There she worked among the Italian immigrant communities, establishing orphanages, schools and hospitals, largely in and around New York City.  Mother Cabrini died in 1917 and was canonized in 1946.

Mother Cabrini High School in the Washington Heights district of Manhattan may be the only major urban high school in the world with a saint buried on the premises.  It remains to this day one of the most highly regarded educational institutions in New York City.  Her body rests in a chapel that was added to the school in the 1950s.  Frances Xavier Cabrini’s feast day is celebrated on November 13. 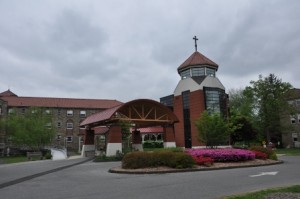 Katharine Drexel is America’s most recent saint.  Born in 1858, she is the only one who was actually born a naturalized United States citizen, as Seton was technically a citizen of Great Britain.  A daughter of a very wealthy and prominent banking family, Katharine put her family’s fortune to good use in her missionary work among Native Americans and African Americans in the post Civil War era.  She established many schools across the United States, most notably Xavier University, one of America’s most prestigious traditionally African American colleges.  Katharine Drexel died in 1955 and was canonized in 2000.

The St. Katharine Drexel Mission Center and Shrine is located at the headquarters of the Sisters of the Blessed Sacrament in Bensalem, Pennsylvania.  The main building of the shrine houses her relic, as well as a museum with exhibits on her life and work.  Of particular interest are the many beautiful hand-made gifts she received from the local Native American groups that she worked with.  Also on site is a small but beautiful chapel.  Katharine Drexel’s feast day is celebrated on March 3.