Hollywood loves a great place to film on location, and not surprisingly some of the best filming locations are religious sites.  Interestingly, I had a very hard time finding religious films which prominently featured churches unless they were comedies (case in point, the majority of movies about organized crime have at least one church in them, while virtually no traditional Christmas/holiday movies feature a church scene; weird).  Anyway, here are some of America’ most recognized churches thanks to Hollywood: 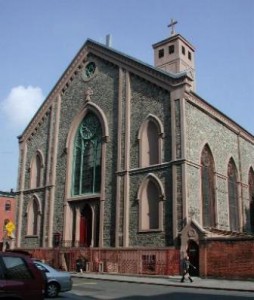 Old St. Patrick’s Cathedral in Lower Manhattan, so designated as to distinguish it from the much more famous St. Patrick’s Cathedral in Midtown, was New York’s second major Catholic church and its first cathedral.  Completed in 1815, it spent much of the early 19th century as a focal point for New York’s Irish community as well as a target for anti-immigrant activity.

Old St. Patrick’s Cathedral has appeared in a number of movies, notably mob films, and most famously in 1972’s “The Godfather” (as well as its sequel, the Godfather III”).  One of the Godfather’s most iconic moments and most quoted lines was filmed in the church, a scene which juxtaposes the baptism of Don Corleone’s nephew with the cold-blooded murders of five of his rivals.

Get Blessed Before the Fight at St. Thomas Aquinas Church 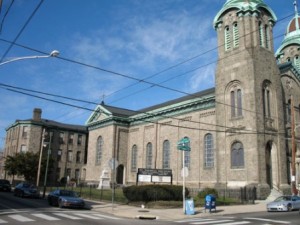 St. Thomas Aquinas Church in the City of Brotherly Love is one of Philadelphia’s iconic Roman Catholic churches.  Built in 1889, it has stood at the heart of a neighborhood that has traditionally attracted Catholic immigrants, notably from Italy.  The church is locally famous for its stained glass.

It is even more famous for its role as a filming location in several of the megahit Rocky films.  Both the interior and exterior was used for shots.  There is conflicting information as to whether or not the interior was used for the Rocky/Adrian in Rocky II.  The location where Father Carmine blesses Rocky before the fight in Rocky II can be found around on the back side of the church.

Get the Band Back Together at Pilgrim Missionary Baptist Church 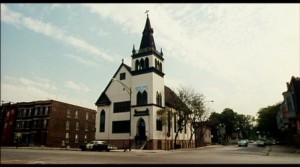 In 1980, Pilgrim Missionary Baptist Church was used for external shots in the film “The Blues Brothers”.  The famous scene where James Brown sang The Old Landmark took place inside of this venerable institution, or at least on a set that recreated the interior so perfectly that church leaders thought the song and dance number was filmed in the church when no one was paying attention. 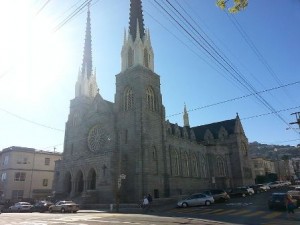 St. Paul’s Catholic Church is one of the oldest and largest Roman Catholic churches in San Francisco.  The parish was established in 1876, and the need for a much larger church became evident within just a few years.  The current building was completed in 1911, and has survived, among other things, several major earthquakes.

St. Paul’s achieved Hollywood fame as the filming location for one of the most memorable and enduring comedies of the 1990s, “Sister Act”, starring Whoopi Goldberg.  Called St. Katherine’s Cathedral in the film, the church as used for both interior and exterior filming.  Actually located in an upscale neighborhood, the crew had to temporarily overhaul the area to give it a run-down, urban decay look which is not evident today.

Break Up a Marriage at the United Methodist Church 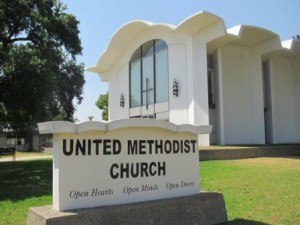 The Methodist community of La Verne just outside of Los Angeles has been around for well over a century.  The church, however, is a relatively young addition, having been constructed in the 1960s.  Its modern design boasted a number of stand-out element which earned it a number of architectural citations at the time of its completion.

Thanks to its proximity to Hollywood, the United Methodist Church of LaVerne has appeared in a number of films.  The most famous of these, hands down, is 1967’s “The Graduate”.  The church’s magnificent chapel became an overnight landmark sensation as the place where Ben Braddock screamed to stop his ex-girlfriend’s wedding.