Once upon a time, the Democratic Party was America’s staunch defender of conservatism, and the Republican Party was the upstart champion of liberalism. And then, one day, they switched. 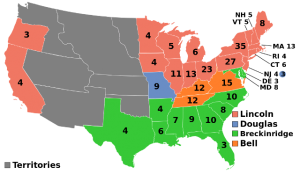 For the first half of the 19th century, the American political process revolved around the Democratic-Republican and Whig parties, with the Federalists, Know-Nothings and other groups playing smaller roles.  The dominant political issue throughout this entire period was of course slavery, and by 1853 most Americans were polarized into the pro- and anti-slavery camps.

In 1824, the Democratic Party was born out of the more conservative elements of the Democratic-Republican Party. Three decades later, the Republic Party was established, with its membership largely made up of former Whigs and the more liberal members of the Democratic-Republic party in the North.  The Democrats, especially in the South, became the primary haven of the pro-slavery elements of society, and by extension the state’s rights party when the federal government became increasingly likely to abolish slavery.  The Republicans became the haven of the abolitionists, and by extension the party of strong central government.

The Democrats tended to attract the industrialists, plantation owners and professional classes; the Republicans attracted the farmers and factory workers. The Democrats were arguably stronger on foreign policy, and most American wars to date had been fought under Democratic presidents; The Republicans were more focused on domestic issues, especially in the early 20th century, such as breaking up monopolies and establishing national parks.  Evangelical and independent Christians, notably Southern Baptists, generally voted Democrat, while more traditional church Christians, notably Methodists, tended to vote Republican.  The Democratic stronghold was the conservative South, while the Republican stronghold was the liberal North.

So how exactly did the two parties switch polarity? The answer lies in the tremendous wave of immigrants that arrived in the late 19th and early 20th centuries.  After the American Civil War, the Democratic Party was on the ropes.  Of the sixteen presidents between 1861 and 1933, only four were Democrats (three if you account for the fact that Grover Cleveland held the office twice, two if it is considered that Andrew Johnson was actually elected as Vice President on a Republican ticket).  The South was still primarily Democratic, but its economy was devastated and its significantly smaller population left it at a considerable demographic disadvantage.  It was only in New York that the Democrats continued to flourish and wield considerable influence.  The secret to their success?  Irish immigrants.

While most Americans had deep reservations about the idea of accepting large numbers of impoverished Catholics into the country and workforce, the Tammany Hall political machine saw them as an ideal source of both votes for the Democratic Party and cheap labor for their industrial constituents. Democratic organizations in other large cities of the Northeast and Midwest eventually caught on, and by the end of the 19th century, Democrats in the North were welcoming immigrants from all over Europe with open arms.  The more conservative elements of the Democratic Party in the South were less enthusiastic about the newcomers, but as it had little direct effect on them socially or economically, and since it gave them a national political boost, they remained passive.  However, by the early 20th century, many industrialists who had long been aligned with the Democrats began to see them as an increasingly pro-labor party.

One of the great fears that the American middle class has always had concerning immigration is the competition provided by cheap labor, a concern not entirely unfounded. Immigrants have traditionally been among the most driven, hard-working and cost-effective laborers in American history, and each large wave of immigrants has usually been accompanied by a brief period of recession as new arrivals are absorbed into the workforce.  But immigrant labor also has a tendency not to stay cheap for very long.  Just as immigrants come to America for economic opportunity, they also come for political freedom.  What the conservative Democrats thought they were getting were easy votes, but what they wound up with was a vast number of highly motivated political activists seeking better wages and working conditions.

To the surprise of the Democratic Party, immigrants were not passive, and by the early 1900’s, immigrant labor hit critical mass. Woodrow Wilson, the first Democratic President since Grover Cleveland, was swept into office on a wave of labor support.  By the end of his second year in office, Wilson pushed through the Clayton Antitrust Act, which among other things set the stage for the creation and protection of large labor unions.  While the conservative Democrats of the south continued to watch in consternation, they were still as yet not largely effected by developments.  But large numbers of wealthy industrialists and middle class business owners in the North began defecting to the Republican Party.

The Republicans, in the meantime, watched with growing concern as their long hold on the federal government began to slip. They welcomed the wealthy class and the financial resources that they brought with them, but what the party really needed was a greater source of votes.  They did receive some support in the form of anti-immigrant voting blocks, and began making overtures to the southern states, but the memory of the great emancipator Lincoln was still fresh after fifty years.  So while the Democratic Party began to resemble once again its pre-Civil War form, liberal in the north and conservative in the south, it was now the Republicans that found themselves being edged into the political wilderness.

The Great Depression of the 1930s saw the Republican Party swept out of power on almost every level. The highly unlikely alliance of southern conservatives and northern liberals gave the Democrats the presidency and control of the government.  With only sparse support in (ironically) New England and the Northeast, it took decades for the Republicans to recover.  However, as had been the case before the Civil War, the party’s North-South social divide became its undoing.

By the end of the Roosevelt-Truman era, American labor had largely triumphed in its quest for better wages and working conditions. With many of their major labor objectives achieved, the now very socially active Democrats in the North turned their attention to civil rights for blacks in the South.  This finally sent conservative Democrats in the South over the edge.  By the 1970’s they had become utterly disillusioned with the northern-dominated Democratic Party and began to flee in numbers.

Many southern Christian leaders also began to leave the Democratic Party at this time. The Republicans welcomed them with open arms.  By the 1990’s, social conservatives and Bible-belt Christians had gone over en-masse to the Republicans, and social liberals and labor had become solidly Democratic. 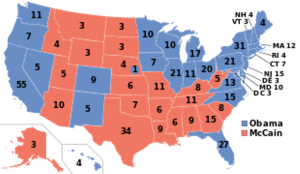 Presto-chango, the transformation was complete.