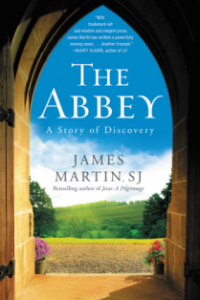 I just finished reading The Abbey by James Martin (www.facebook.com/FrJamesMartin). I was (not surprisingly) intrigued by the title.  Usually I prefer books of a more historical, or at least historic fictional, nature, and The Abbey is strictly an inspirational work.  As such it was an enjoyable enough read, and I can see its appeal for those are struggling with loss in the modern world.

Of course, my personal interest was in the monastery itself. The story is set in the Abbey of Saints Philip and James in the suburbs of Philadelphia.  The author brings the abbey to life as a character in and of its own right, beautifully describing it as an idyllic refuge and sanctuary for the various suffering characters.

The moment I finished the book I immediately decided to research the Abbey of Saints Philip and James, only to discover (much to my disappointment) that this monastery does not exist. Per the acknowledgments, it is based on the author’s ‘experiences with Trappist and Benedictine monks and monasteries in the United States’.

But have no fear. There are many Catholic (and even a few Orthodox) monasteries all across the United States, including over three dozen Benedictine and more than a dozen Trappist institutions.  As it happens, the oldest and largest Benedictine Abbey outside of Europe is located in Pennsylvania (and it’s the one I’m most familiar with).  So for those who are looking to make a pilgrimage to the Abbey of Saints Philip and James, a good stand in might be the Saint Vincent Archabbey in Latrobe, Pennsylvania.

(Note – If James Martin reads this, I would sincerely love to hear more about which specific abbeys have inspired your work). 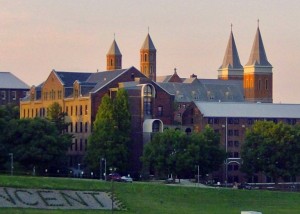 The Archabbey of St. Vincent is the oldest Benedictine abbey in the United States. It is also believed to be the largest Benedictine abbey outside of Europe.  Well known in Western Pennsylvania for its connection to St. Vincent College, it has connections to important Catholic institutions all over the United States as well as Taiwan and Brazil.  Part of the abbey is listed on the National Register of Historic Places.

In 1840, Father Boniface Wimmer, a Benedictine monk from Metten Abbey in Bavaria arrived in the United States with the intention of establishing a new abbey for the Benedictine order. He and his followers ultimately became established at Latrobe, Pennsylvania in 1846, where they founded the Abbey of St. Vincent.  The existing parish, known as The Sportsman’s Hall Parish, was renamed St. Vincent Parish in honor of the abbey.

Under Father Wimmer the order expanded steadily, and by the time of his death in 1887 the organization was very large, with several abbeys, numerous parish churches and several hundred members. During his lifetime the monks of the Abbey of St. Vincent went on to establish St. Vincent University and St. Vincent.  St. Vincent’s was officially confirmed as an abbey by the Papacy in 1855.  The St. Vincent Basilica was completed in 1905.

The Archabbey of St. Vincent is now a very extensive complex which includes the main abbey, basilica, and educational facilities. The main place of interest for most visitors is the stately basilica.  In appearance the basilica is architecturally very unusual for a Catholic edifice due to its red-brick construction (it looks as though someone took red-brick Georgian-style Episcopal church, enlarged it and reshaped it into a Catholic cathedral).  The effect is very beautiful and very different.

In addition to the basilica and abbey there are also the campuses of St. Vincent College and St. Vincent Seminary. However, the abbey’s most historic building is its gristmill.  The St. Vincent Archabbey Gristmill was constructed in stages between 1854 and 1883 and is still operated by the monks a business to produce flour.  The steam-powered mechanism is a pilgrimage draw for engineers.  The Gristmill was added to the National Register of Historic Places in 1978.