Iceland The Vatnajokull Glacier is the largest formation of ice (by volume) in Europe.  With over three thousand square miles in surface are and over a half a mile thick in places, it covers about one-tenth the surface of Iceland, effectively giving the island its name.  Vatnajokull actually feeds over two dozen smaller glaciers.  Much of the glacier falls inside Vatnajokull … END_OF_DOCUMENT_TOKEN_TO_BE_REPLACED

Iceland The Gullfoss (Golden Falls in English) is arguably the most spectacular waterfall in Europe and possibly the finest located in a Subarctic setting.  For much of the colder months of the year, the canyon into which the Gullfoss plunges is covered in massive ice formations, giving the waterfall a particularly spectacular setting.  It is one of the sites of the ‘Golden … END_OF_DOCUMENT_TOKEN_TO_BE_REPLACED

Norway (604 m) – Most Iconic Mountain in Scandinavia The Preikestolen is an immense outcropping of exposed granite known for the famous cliff at its peak which juts out over the Lysefjorden in southern Norway.  The view from this peak, overlooking the specatular blue waters of the coastal fjords, is considered to be one of the most beautiful on Earth.  Not surprisingly, it is … END_OF_DOCUMENT_TOKEN_TO_BE_REPLACED

Iceland (1,725 m, 1,512 m) – Most Active Volcanoes in the North Atlantic Mount Grimsvotn and Mount Katla are two of the most prominent, and most active, volcanoes in the entire North Atlantic.  Together they dominate the heavily volcanic island-nation of Iceland, and both have experienced major eruptions within the last few years.  Despite this activity, or perhaps because of … END_OF_DOCUMENT_TOKEN_TO_BE_REPLACED

Helsinki, Finland Suomenlinna Fortress is also known as the Sveaborg, or Swedish Castle, and also as the Sea Fort because it occupies a cluster of small islands just outside of Helsinki, Finland.  A relative latecomer to Scandinavia, Suomenlinna was built by the Swedes in response to the construction of Russia’s new capital at St. Petersburg, which posed a serious threat to … END_OF_DOCUMENT_TOKEN_TO_BE_REPLACED

Mariefred, Sweden Gripsholm Castle is Sweden’s answer to Akershus in Norway.  Built to protect the western approaches to Stockholm from the threat of Danish or Norwegian incursions, it enjoyed a relatively peaceful history, and even served as the residence of the Swedish monarchy for the better part of two centuries.  Other than being torn down and replaced in the 1500s, … END_OF_DOCUMENT_TOKEN_TO_BE_REPLACED

Elsinore, Denmark Kronborg Castle, tucked away close to the northernmost tip of continental Europe, is the pride of Denmark, and with good reason.  Dominating the extremely narrow straits between Denmark and Sweden, Kronborg may be the most strategically located fortification in Northern Europe.  This was especially true after the development of gunpowder cannon, when … END_OF_DOCUMENT_TOKEN_TO_BE_REPLACED

Oslo, Norway Akerhus Castle is one of the oldest and largest medieval fortresses on the Scandinavian Peninsula.  Originally built to protect the city of Oslo from the Swedes, it is also one of the oldest castles in Europe still actively used for military purposes, and as such has been exceptionally well maintained over the centuries.  Akerhus Castle’s military record is … END_OF_DOCUMENT_TOKEN_TO_BE_REPLACED 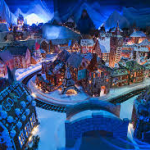 Bergen, Norway For the ultimate in gingerbread architecture, the end-all and be-all is without a doubt the Gingerbread City of Bergen.  While gingerbread is popular throughout Europe, and gingerbread construction projects a favorite activity for Christmas celebrants around the world, no one takes gingerbread more seriously than the good citizens of Bergen, Norway.  Every … END_OF_DOCUMENT_TOKEN_TO_BE_REPLACED