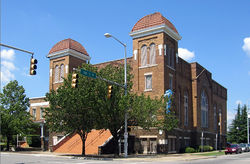 The 16th Street Baptist Church is, along with the Ebeneezer Baptist Church in Atlanta, the most famous traditionally African-American churches in the United States.  As the site of one of the most notorious terrorist bombings in American history, where four little African-American girls were killed by white supremacists, 16th Street Baptist has forever become associated with the Civil Rights movement.  Today it is a symbol of that movement, one of Alabama’s most important historic sites and the most popular tourist draw in the city of Alabama.

The 16th Street Baptist Church is one of the oldest African-American church communities in the deep South.  Formed as the First Colored Baptist Church of Birmingham in the 1870s, a church building was constructed, the major church built in Alabama to serve the local black community.  The congregation moved at least once, and the building was rebuilt at least once due to condemnation in the early 20th century. 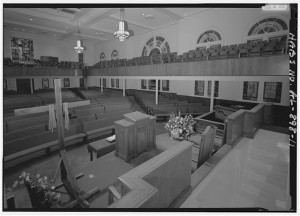 16th Street Baptist became the center of the African American community in Birmingham, and was regularly visited by prominent visitors and speakers.  This made the church both an important rallying point for meetings and marches, especially to air grievances about racism.  It also made the church a target.

Things came to a head in the 1960s, when discouragement and anger over the state of blacks in the South began to boil over.  The 16th Street Church was the center for rallies that included speakers such as Martin Luther King Jr.  The surrounding neighborhood soon became a war zone as opposition to the Civil Rights Movement mounted.  On September 15, 1963, the church was bombed by four members of the Ku Klux Klan. 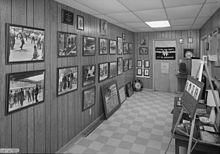 The church sustained heavy damage.  Over twenty people were injured, and four little girls preparing for a youth function were killed.  This proved to be one of the great turning points in American history, and revulsion over the bombing led almost directly to the passage of the Civil Rights Act.  The four girls, mourned the world over, became martyrs for the movement.  The church was quickly repaired and was put back into use in the childrens’ memory.  Still an active institution, the 16th Street Baptist Church is now in use both as a religious building as well as a museum to the Civil Rights movement.

The 16th Street Baptist Church is perhaps the best known landmark in the city of Birmingham.  The current church building was completed in 1911 after the previous structure was demolished.  A distinguished-looking red brick building, it maintains its vigil over the beautiful old African-American neighborhood which has been in Birmingham for over a century and a half.  A grand staircase leads up to the building’s façade. 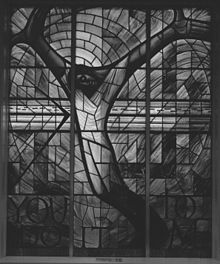 The church interior is an excellent example of turn-of-the-century southern church architecture.  One part of the sanctuary seems both oddly out of place and fitting: a stained-glass window featuring a dark-skinned Jesus being crucified.  This famous window was gifted to the church by the people of Wales after the bombing. It was created by famed artist John Petts. The church basement is home to civil rights and commemorative exhibits.

The 16th Street Baptist Church is located in the Kelly Ingram Park area on the west side of Birmingham, approximately 120 miles west of Atlanta.  It is open Tuesdays thru Fridays from 10:00am-3:00pm and Saturdays from 10:00am-1:00pm.  Tour arrangements are required.  There is no cost of admission other than donation.  Web: http://16thstreetbaptist.org (official website). 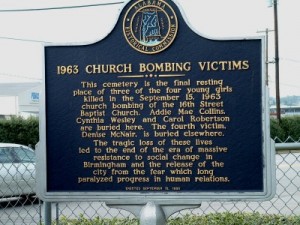 Birmingham is home to two important related sites: the Birmingham Civil Rights Institute, which houses another exhibit on the bombing; and the Greenwood Cemetery, where three of the four little girls are buried and commemorated.  Another important, related site in Alabama is the Dexter Avenue King Memorial Baptist Church where Martin Luther King Jr. organized the Montgomery Bus Boycott.