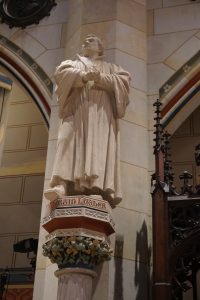 On October 31st of last year, Lutherans in Germany and Protestants everywhere celebrated the 500th anniversary of one of the most pivotal events in world history: Martin Luther nailing his fabled 95 Theses to the door of the Castle Church in Wittenberg.  This unassuming action inadvertently kicked off what later became known as the Protestant Reformation, fracturing the power of the Roman Catholic Church and kicking off more than 130 years of religious warfare across Europe.

In honor of this event, Germany declared a highly unusual one-off national holiday, and The Complete Pilgrim was there to participate in the festivities.  After a brief stopover in Berlin, I travelled to Wittenberg on October 30th, which was packed with tourists and pilgrims from all over the world (but mostly Germany and the United States).

The small city of Wittenberg, in defiance of the gray and chilly weather, was decked out from end to end in the trappings of a Renaissance Faire. The streets were largely free of modern vehicles.  Many of the citizens, from shopkeepers to city officials, were decked out in 16th century finery.  Overall, a mostly successful effort to evoke the Wittenberg that Martin Luther might have known in his day.

I checked in to my room at the centuries-old Colleg Wittenberg, lodgings which I landed with the assistance of the local American Lutheran ministry (I found out later many of those leading the church services were staying at the same rest house).  The dormitory-like building and Spartan but modern rooms had a monastic feel, which perfectly set the mood for my visit. 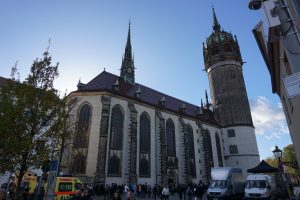 Heading straight off to the All Saints’ Church, also known as the Castle Church or Town Church, I intended to make this Protestant Mecca my first stop.  Unfortunately, church officials were setting up for the following day’s big event, and only a very brief walk-through was permitted.  Frustrated that I went all that way and unable to see Luther’s tomb, I was determined to be the first on line the next morning to get in to the service.  After taking some pictures of the Reformation Doors, I settled for a tour of beautiful Wittenberg.

I started by walking the mile or so to the other end of the old town and seeing the main sites as I worked my way back.  This started me off at the somewhat misnamed Luther House.  Actually a restored building of the early University of Wittenberg, Luther lived here for some years and it is believed to be where he wrote his 95 Theses.  The building is now home to a comprehemsive museum on Luther’s life and works. 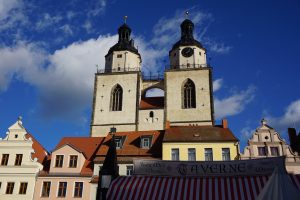 Many buildings throughout the city are marked as part of a Luther/Reformation trail, highlighting other buildings associated with Luther or his compatriots like Philip Melancthon.  Unfortunately, due to time constraints, I was only able to visit a few of these, but I did make it to the magnificent St. Mary’s Church which towers over the town square.  This church, where Luther frequently preached during his lifetime, is famous for its painting of The Last Supper by Lucas Cranach, who substituted the faces of Luther and other Reformers for the Apostles.

Determined not to miss the morning service, I had a sunset dinner at the Brauhaus Wittenberg (a little pricey but the food was excellent) and headed to bed early.  My strategy paid off when I woke up at 4am the next morning and made my way through the bitter cold to the church.  My timing was excellent.  The police had just arrived to set up the security barriers, and I got to the main security checkpoint without having to make my way through a maze of temporary fences.  I even helped them set up the barriers and received a pastry from the Wittenberg police for my efforts.  Unfortunately, I was not the first on line (I was the second).  But within minutes there were a hundred more people behind me.

Enduring the chill, I waited with my chance fellow pilgrims for the security area to open, which it did around 7am.  I slowly made my way to the side door of the church, just behind the magnificent round tower, and entered.  The balcony was restricted to use by film crews and security police, but I landed a prime seat in the front right pew on the aisle.  I secured the seat with my jacket, then finally got to briefly tour the church before the service started. 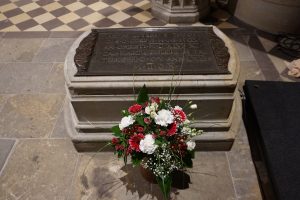 The sanctuary is ornate by Protestant standards, boasting a wealth of art and statuary atypical of a Lutheran church.  But my focus was not on the magnificent stone and woodwork, the stern statues, the soaring stained glass windows.  It was on the church’s historic highlight: a stone ossuary containing the remains of Martin Luther.

It was a poignant moment, paying tribute to one of the most pivotal figures in western history, knowing that exactly five hundred years earlier to the day Luther was standing on the grounds of the same church about to launch a cultural revolution.  For all of his many faults, Luther’s actions made him one of the founding fathers of the modern world.

After standing there for several minutes pondering the vagaries of history, I moved on to some of the church’s other treasures: the ossuary of Philip Melanchton, Luther’s close associate and co-leader of the Reformation; and an early printed copy of the 95 Theses in a glass case. 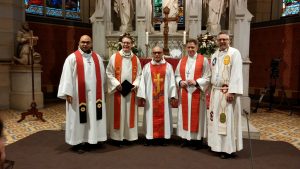 Lutheran Ministers Who Officiated At The 500th Anniversary Service

Before the service, I had the opportunity to meet Robert Moore, a Lutheran minister who was officiating at the 8am English service (and who had helped me secure a room at the Colleg Wittenberg).  We only had a few minutes to chat, but his enthusiasm for the day and the once in a lifetime event really filled the church with energy.  Better still, he made certain that I would be able to film the event without being hassled (video to come).

The English service was inspirational to say the least (it was a High Church Lutheran service, which I had never been to before).  Not surprisingly, it wrapped up with an enthusiastic if off-tempo rendition of Luther’s immortal hymn, “A Mighty Fortress”.  Afterwards, we were quickly ushered out of the church so that preparations could be made for the German service and the arrival of government dignitaries (which I was not privy to). 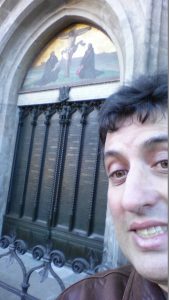 The Theses Doors of the Castle Wittenberg Church

One last highlight of the service: we exited through the “Theses” doors, two huge bronze portals on which are engraved Luther’s 95 Theses (a special treat as these doors are not frequently opened).  As the church emptied and the doors closed behind us, I took one last opportunity to ponder how Luther’s simple pamphlet turned the world on its head on October 31, 1517.

Before leaving Wittenberg, I stopped back at the Colleg for a quick and late breakfast.  It was then that I found out all of the English ministers and staff members were staying there as well.  It made for a great opportunity for some quick pictures and interviews.

That night, back in Berlin, Germany’s capital was still enjoying its special state holiday.  In Luther’s honor, the absolutely breathtaking Berlin Cathedral hosted a Bach organ concert.  It was the perfect way to finish my two day Reformation pilgrimage, a once in a lifetime journey I will never forget.