When discussing the term ‘oldest church’, in general it means one of two things: the actual oldest church building, or the oldest congregation. The first is probably more important architecturally, and the second is probably most important historically.  Outside of the oldest Catholic parishes in the U.S. Territory of Puerto Rico and a few other places, the oldest congregations in America are, not surprisingly, concentrated along the Eastern Seaboard.  These all date from the first three decades of the 17th century and are all going strong: 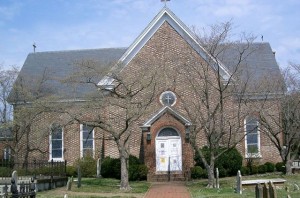 St. John’s Episcopal Church was the second Anglican parish founded in Virginia after Jamestown, but the oldest that is continually active.  Hampton was the second major English settlement of the Jamestown peninsula.  It was established in 1610 as part of a relief expedition during the Starving Time.  An initial church was constructed at the site of the first settlement.  However, the center of Hampton moved several times, and the parish moved with it.

The current St. John’s Church was constructed in 1728.  Over the next century it was badly damaged in three separate wars (the American Revolution, the War of 1812 and the American Civil War), possibly the only church in the United States to be so dubiously distinguished.  Among the church’s treasures are a stained glass window depicting the baptism of Pocahontas, a piece of stained glass from the church where John Smith was baptized, and a silver communion set that has been in use since 1618. 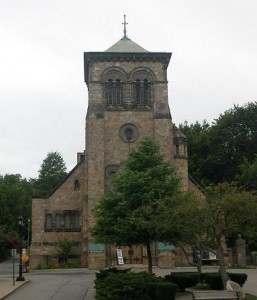 The First Parish Church in Plymouth is home to what is claimed (by a technicality) to be the oldest continuously active Protestant congregation in the United States.  It was actually founded in the town of Scrooby, England in 1606 before relocating to America with the Pilgrims on the Mayflower.  It officially became reestablished in Massachusetts on November 9, 1620, becoming America’s first English-speaking non-Anglican Protestant congregation in the colonies.

In Massachusetts, the congregation moved several times, and is currently in a church building that was completed in 1899.  They remained continually active as a Congregationalist church for over two hundred years and then (interestingly) eventually adopted Universalist Unitarianism.  The church cemetery is the burial site of the congregation’s first pastor, William Brewster, and local Native American hero Squanto. 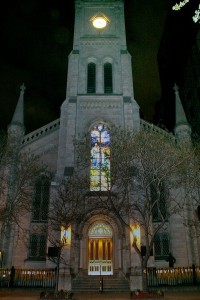 Marble Collegiate Church, a direct offshoot of the Collegiate Reformed Protestant Dutch Church (the mother church of Dutch Reformism in America), was founded in 1628 and is the oldest congregation in New York City.  It was the center of New York’s religious life for well over half a century.  Their first church building was completed in Lower Manhattan in 1633, but over time the growing congregation split and moved several times.

The current church building in Midtown on Fifth Avenue was completed in 1854. It became one of America’s best known churches in the 20thc century thanks to its minister Norman Vincent Peale, who was America’s most prominent Christian radio personality for many decades.  A famous bronze statue just in front of the church depicts statues of the holy family weary from their trip to Bethlehem. 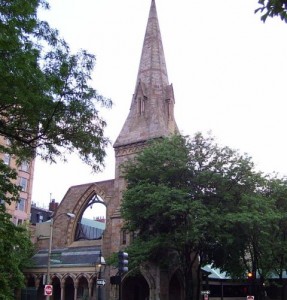 The First Church of Boston is the original congregation of Boston, established in 1630 long before the founding of the city’s Anglican parishes.  It actually began as an extension of a congregation in Charlestown across the river (no longer in existence) and originally met in a meeting house.  John Cotton, one of the earliest prominent ministers in American history, served here for a brief period.

The congregation moved several times over the years, and in the 19th century was split by a schism (they would ultimately re-merge).  In 1968 a fire destroyed much of the existing church, and the current building dates from this time (though it incorporates the façade of the 1867 church. 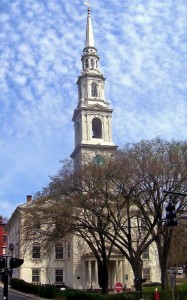 The First Baptist Meeting House is the home of the oldest Baptist congregation in the United States.  It was founded by Roger Williams, who came to America in 1631 to serve as a Puritan minister.  However, in Massachusetts he quickly became disillusioned, both because of the church wasn’t quite separate enough from state, as well as his more moderate views on Christian law.  In 1638 he and a few of his followers fled to Rhode Island and established the new Baptist church there.

For much of its early existence the congregation worshipped out of people’s homes.  The first meetinghouse wasn’t completed until 1700, and the current church building dates from the late 18th century.  The church cemetery, located a few blocks away in Terrace Park, is the location of Roger Williams’ gravesite.