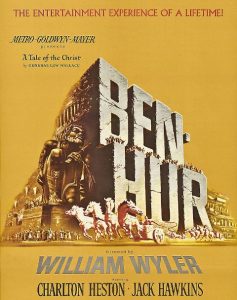 To date, approximately a thousand movies have been nominated for Academy Awards since they began in 1929. Surprisingly few of these have had religious or spiritual themes.  However, the few religious movies that have been so honored are among the most successful and beloved films of all time.  In order to narrow down this exceptional list, there were only three criteria: each movie had to be at least nominated for Best Picture, each movie had to have won at least one Academy Award, and each movie had to have a significant religious component.  The resultant list of 22 films ran the gamut from Biblical epics to modern struggles of faith.  Here is The Complete Pilgrim’s list of the seven most successful Oscar winning religious films of all time:

One of the most financially successful Biblical epics of all time, the 1959 adaptation of Ben Hur is considered by many to be the gold standard against which all other such films are judged.  Directed by William Wyler and starring Charlton Heston as Judah Ben Hur, this “story of the Christ” is actually the story of a fictional Jewish prince, his tribulations, and his periodic encounters with Jesus of Nazareth.  Featuring some of the best filmmaking in the history of Hollywood, it includes (among other things) one of the most beautiful portrayals of the Nativity ever put on screen, and of course, the indescribably amazing chariot race.  Academy Awards: 12 nominations, 11 wins (including Best Picture, Director and Actor)

This semi-fictionalized account of the life of the world famous composer Wolfgang Amadeus Mozart is told from the viewpoint of his musical rival, Antonio Salieri. The entire film is a flashback, as an aging Salieri spins the story as a murder confession to his priest.  The entire film has strong religious overtones, beginning with the title, Amadeus, which means ‘beloved of God’.  The main theme is Salieri’s struggle with his faith, which remains unresolved at the end of the movie.  The film score features some of history’s most powerful religious music, both by Mozart and other composers.  Academy Awards: 11 nominations, 8 wins (including Best Picture, Director, Screenplay and Actor)

One of the greatest films ever made by legendary producer/director Steven Spielberg, Schindler’s List has become, in many ways, the definitive Hollywood movie about the Holocaust.  It traces a community of Jews in Poland from the Nazi conquest in 1939 until their liberation in 1945, and how they are saved from annihilation by the efforts of their employer, Oskar Schindler.  Persecuted for both their cultural identity and their faith, the Jews struggle to maintain both in the face of terrifying horrors, while the profit-minded Schindler finds his own faith and redemption in defending the innocent and helpless.  Academy Awards: 12 nominations, 7 wins (including Best Picture, Director and Screenplay)

This account of the life of St. Bernadette was one of the earliest successful non-Biblical Christian films ever made. It tells the story of Bernadette Soubirous, a young girl who lived in Lourdes, France in the 19th century and who became famous for the many unexplained visions she had of the Virgin Mary.  The back story to the Shrine at Lourdes, one of the most visited Catholic pilgrimage destinations in the world, The Song of Bernadette was one of the most popular religious films of the 1940s, and remains to this day the definitive movie adaptation of Bernadette’s life.  Academy Awards: 12 nominations, 4 wins (including Best Actress)

The most successful and beloved movie musical ever made, this semi-fictional account has become famous for religious associations and themes. It tells the story of Maria von Trappe, a convent novice struggling with her faith who takes a position as governess to a wealthy widower with seven children.  Convinced that her purpose is to serve her fellow man as a nun, she is caught between love of God and love of a man.  Filmed throughout Salzburg, including at some of Austria’s most beautiful churches and religious sites, and featuring magnificent liturgical music, The Sound of Music has been a favorite of Christian audiences for three generations.  Academy Awards:  10 nominations, 5 wins (including Best Picture and Director)

Arguably one of the best religious war films, this account of the life of Alvin York brings to life one of the most decorated soldiers in American history and the conflict he has as a conscientious objector. The film follows his life as a devout Christian and pacifist as he faces the prospect of having to fight in World War I.  After losing his fight to be exempted from the draft on the grounds of non-violence, he serves in the army with distinction, famously capturing over a hundred enemy soldiers almost single-handedly.  He went on to win the Congressional Medal of Honor, and the movie went on to inspire the American military effort of World War II.  Academy Awards: 11 nominations, 2 wins (including Best Actor)

A highly unexpected entry on this list, The Exorcist, one of the most disturbing horror movies ever filmed, is famous (or infamous) for its portrayal of obscure religious ritual in the face of abject evil. A completely fictional account of a young girl who becomes possessed by a demonic spirit, the story revolves around a pair of priests that are brought in to perform an exorcism.  While the exorcism is successful, it leaves both priests dead, and theater audiences highly shaken from the exceptionally disturbing imagery.  It was later followed up by several sequels, none of which had the critical acclaim of the original.  Academy Awards: 10 nominations, 2 wins (including Best Screenplay)

One of the epic historical films of the post-war era, Becket is the definitive stories of the conflict between loyalty to God and loyalty to country. Becket recounts the story of Thomas Becket, a loyal friend and retainer of King Henry II of England, who receives the position of Archbishop of Canterbury.  As Becket’s faith grows, he comes into increasing conflict with the king, until they are completely at odds with each other.  In the end Becket chooses God, and is assassinated for his faith, though he later is redeemed by being made a saint of the Roman Catholic Church.  The film is famous for phenomenal performances by Peter O’Toole and Richard Burton, both of whom were nominated for Best Actor for their efforts.  Academy Awards: 10 nominations, 1 win (including Best Screenplay)

Here are some other top Academy Award winning religious films worth seeing:

Fiddler on the Roof (1971) – A musical based on the stories of Shalom Aleichem, it recounts the trials and tribulations of Russian Jews on the eve of the great migration to America

Witness (1985) – A thriller set in Pennsylvania Dutch Country, this movie features some of the best depictions of Amish life ever committed to film

The Grapes of Wrath (1940) – Based on one of the greatest novels of all time, this film follows a devout Christian family as they flee the Dust Bowl in search of a better life in Depression-era California

The Bells of St. Mary’s (1945) – This fictional account of a priest and a nun who struggle to save an aging Catholic school has become a Christmas season favorite.