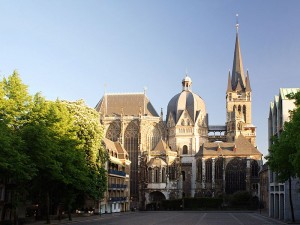 Medieval Aachen, or Aix-La-Chappelle, skyrocketed onto the world stage at the end of the 8th century when the city was chosen by Charlemagne as capital of the Holy Roman Empire, one of the largest states ever directly sanctioned by the Roman Catholic Church.  In his capacity as Holy Roman Emperor, Charlemagne built the first truly great cathedral in Northern Europe in Aachen and filled it with a large collection of interesting treasures and artifacts.  Upon his death the emperor’s body was interred within.  Though technically not a saint, Charlemagne was probably the most important Christian ruler of all time, and was instrumental in cementing the Catholic Church’s hold on Europe for the next millennium.  It is now one of the most popular religious tourist destinations in the Rhine River region.  Aachen Cathedral is a UNESCO World Heritage Site.

The site where the City of Aachen now stands has been inhabited since Neolithic times, but it was not until the 8th century, that the Christian Kings of the Franks began to take an interest in the place due to its strategic location and hot mineral baths.  King Pippin spent the winter of 765 there, and Aachen was soon made part of the king’s personal domains.  His son Charlemagne also took a liking to the city, and in 768 AD, shortly after assuming the throne, he decided to make the more centrally located Aachen his royal headquarters.  Vast sums of wealth poured into Aachen from Charlemagne’s conquests, and soon it was a thriving metropolis.  The Palace Chapel, which would later be redeveloped into the magnificent Aachen Cathedral, dates from this time.

During his reign, Charlemagne built the largest unified state that Western Europe had seen since the fall of Rome in 476.  His efforts consolidated large swaths of Rome’s old western provinces, as well as considerable German territory.  Furthermore, his military and political efforts on behalf of Pope Leo III in 799 resulted in a close relationship between the Franks and the Papacy.  In an effort to preserve the friendship of the strongest state in Europe, establish a counterbalance to the Emperor in Constantinople and secure a strong ally against the encroachments of the Moors in Spain, Leo crowned Charlemagne as the Holy Roman Emperor on Christmas Day in 800 AD.

This was the first time any Christian monarch received a sacred title from the Papacy, and the event marked the beginning of the Holy Roman Empire.  Charlemagne and his successors strove to make Aachen, the empire’s first capital, a major Christian religious center, and went about acquiring all sorts of relics and holy objects for the city.  Aachen did eventually become a major destination for Christian pilgrims, not for the things that Charlemagne collected, but rather to visit the Tomb of Charlemagne, the greatest of Christian kings, himself.

After Charlemagne’s death, questions concerning the succession and organization of the government weakened Aachen’s political importance.  The city fell under the dominion of his son Lothair, the central and geographically weakest of the three successor kingdoms, and its brief moment in history as the capital of Northern Europe came to an end.  As the Holy Roman Empire began to transform itself into a vast collection of loosely organized small states, the idea of a centralized capital faded.  The empire was henceforth run from wherever the Emperor or Imperial Diet happened to be at the moment.  However, Aachen’s spiritual and symbolic importance remained central to the empire’s religious traditions, and from 936 to 1531 every Holy Roman Emperor was crowned there.

Aachen Cathedral was originally the chapel of Charlemagne’s palace in the city.  Most of the original structure, which dates back to the 8th century, is intact but has since been greatly enlarged.  Architecturally it is a pre-Gothic blend of Byzantine and early Germanic styles.  The three major elements of the building include the large Glass House, which features an immense amount of stained glass and allows for considerable outside light; the Central Dome; and the Bell Tower and Steeple, the latter being added at a future date.  For many years Aachen Cathedral was one of the largest churches in Europe north of the Alps.

The interior of the church is highly decorative and extensively gilded.  The chamber under the main dome borrows heavily from the earlier Byzantine traditions and is dominated by a great golden chandelier.  Charlemagne’s body now rests within a gold and silver reliquary behind the main altar.  Among the Cathedral’s many other treasures are Charlemagne’s Crown and the Cross of Lothair, the latter being a gold and silver plated wooden cross with an engraving of Christ.

Aachen Cathedral is located in the center of Aachen, about fifty miles west of Cologne along the Belgian border.  The cathedral can be visited as a daytrip from Cologne or Bonn or a long daytrip fom Brussels.  It is open November through March from 7:00am-6:00pm and April through October from 7:00am-7:00pm.  There is no charge for admission.  Web: www.aachendom.de (official website)

At the height of Aachen’s power as capital of the Holy Roman Empire, the cities of the Middle Rhineland vied to keep up with their own great cathedrals and religious artifacts.  The most successful was nearby Cologne.  The Cologne Cathedral, the largest in Germany and one of the largest in the world, houses a number of early artifacts.  The main attraction, however, is the Shrine of the Magi, where the three wise men of New Testament fame are supposedly buried.