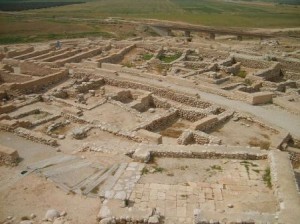 At some point between his sojourn in Shechem and his burial in Hebron, the patriarch Abraham resided for a time in the Canaanite settlement of Beersheba.  The site known as Abraham’s Well, believed to be the one mentioned in the Hebrew Bible, still exists near where Abraham once lived.  Beersheba subsequently played a series of minor roles in the history of Biblical Israel and for a long while afterward.  However, following the collapse of the ancient kingdoms until the early 20th century, Beersheba remained little more than a dusty Bedouin outpost in the Negev Desert.  Today it is a sizeable metropolis which, though its modern architecture has seriously infringed on the ancient town’s ancient feel, makes the area’s sacred places much more accessible.  Beersheba is part of the Biblical Tels UNESCO World Heritage Site.

The exact Biblical timeline is somewhat confused, but at some point shortly before or after the near-sacrifice of his son on Mount Gezrim, Abraham settled in the small town of Beersheba.  Why he selected this harsh, dusty place on the fringe of the Negev Desert over the more hospitable lands further north is unknown, but it seems to have been his primary residence in Canaan.  Around the time of his arrival, Abraham concluded an alliance of sorts with a neighboring Philistine king named Abimelech.  The pact included the right of ownership to Beersheba’s well, which he himself supposedly constructed, in exchange for seven lambs which were given to the Philistine monarch.

Though Abraham was later buried in nearby Hebron, the family seems to have stayed in the area of Beersheba.  More likely, as a family of shepherds, they probably migrated regularly between Beersheba, Hebron and other places.  According to the Bible, Isaac, Abraham’s younger son, lived in Beersheba long enough to construct an altar here.  Other Biblical traditions suggest that Beersheba also had connections to Isaac’s two sons, Jacob and Esau.  Jacob’s famous dream supposedly took place not too far outside of Beersheba, while the descendents of Esau, the Edomites, still resided in the area centuries later during the Exodus period.

Beersheba fell by the wayside in the history of ancient Israel until the early days of the kings, when its position on the borders of both the Philistine and Amelekite lands made it more strategically valuable.  Its importance was underscored by the fact that King Saul had a fortress constructed here, while the prophet Samuel established his own sons as judges here.  A century or so later, Beersheba made the Biblical scene again when it briefly served as a refuge for the Prophet Elijah during his exile from the Northern Kingdom.

Little is known of the subsequent history of Beersheba.  Even at the height of the Israelite kingdoms it was probably never more than a large town.  It was later annexed by all of the usual conquerors until it was finally abandoned sometime during the early Islamic period.  Over the next twelve centuries, Beersheba was slowly reclaimed by the Negev Desert and the Bedouin nomads who roamed the area.  Interest in redeveloping the area did not occur again until the 20th century.  A small metropolis now thrives here.  Amazingly, Abraham’s Well still survives amidst the urban sprawl.

The city of Beersheba today resembles nothing of its ancient self.  The desert has been systematically driven back to make room for a quickly expanding population in what is now Israel’s sixth-largest city.  However, not too far ouside of Beersheba’s boundaries, the Negev still beckons in all of its rugged glory.  Those seeking a more authentic setting for Abraham’s life do not have to look far to find it.

What is now called the Old City of Beersheba was actually developed during the Ottoman and British colonial periods.  Abraham’s Well is located in this part of the town, and its immediate surroundings, which include old brick structures and ruins, give it a more ancient atmosphere.  Unfortunately, much of the well’s current construction dates back to the Ottoman occupation.  However, true believers suggest that it is still the original well, in Abraham’s original location, and that the Ottoman work reflects little more than renovations and restorations.

Beersheba is approximately eighty miles southwest of Jerusalem and a hundred miles south of Tel Aviv.  The direct road from Jerusalem runs through Palestinian territory, so most visitors to Beersheba take the latter route.  Abraham’s Well is an open site.  Nearby is the Abraham’s Well Museum, which consists of an information center and exhibits on ancient Beersheba.  The museum is open Sundays through Thursdays from 8:00am-4:00pm and on Fridays 8:00am-2:00pm.  There is no cost of admission.  Web: www.goisrael.com (official tourism website of Israel)

To get a better feel for the ancient desert town of Abraham’s day, visitors may go to Tel Beersheba, a hill that lies a few miles to the northeast of the modern city.  Excavations there have unearthed the ruins of houses dating back as far as the 12th century BC, as well as later constructions, including an old Roman outpost.