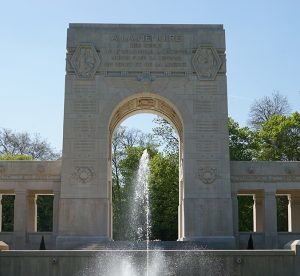 American military monuments and cemeteries can be found in dozens of countries around the world. Nowhere is this more true than in France, which, thanks to the two World Wars, has almost as many American monuments than all other countries (outside of the United States) combined.  The American Battle Monuments Commission alone maintains over two dozen cemeteries in monuments in France, most of which are related to the First World War.  The Second World War is also well represented, especially in the area around Normandy (memorials honoring those who fought at the Battle of the Bulge are generally located in Luxembourg and Belgium).  Here are five must-see memorials for Americans visiting France:

The American Expeditionary Force deployed to France in late 1917 and early 1918 took a while to get ready and deploy for action. Its first major contribution to the war was in a series of engagements that halted a massive German advance towards the city of Paris, notably at the battles of Chateau-Thierry and Belleau Wood.

Throughout the summer, fighting raged east of Paris at the Second Battle of the Marne. The AEF fought in more than half a dozen engagements, largely around the city of Aisne.  By mid-August, the German offensive was over.  Americans proved key in turning the tide, though they suffered heavy casualties for their efforts.  In 1937, the Chateau-Thierry American monument was dedicated to those who fought in these summer campaigns.  Also nearby are the American cemeteries at Aisne-Marne and Oise-Aisne, where over eight thousand dead from these battles are buried.

The Meuse-Argonne Offensive was the last major campaign of World War I. Running from late September through the end of the war on November 11, it was America’s largest campaign of the war.  It was also the only campaign where the United States bore the brunt of the fighting, and where America received the highest number of casualties during the conflict.

Like most of the campaigns of the war, there was little advancement in the first few weeks of the offensive. However, by October the allies were pushing forward and making great gains almost on a daily basis.  In their most action of the war, the Americans cleared out the Argonne forest.  The contributions of the AEF were commemorated with a monument in 1937.  Not too far away there is also the Meuse-Argonne American Cemetery, where over fourteen thousand American soldiers are buried.

The Lafaytte Escadrille is one of the most storied American combat units of World War I. Made up of pilots and support crew from the United States, the all-volunteer Lafayette Escadrille fought under French command before America formally entered the war.  The squadron fought in numerous engagements between 1916 and 1918, when it was dissolved and its volunteers rejoined to the AEF.

Over the course of nearly two years, hundreds of Americans volunteered with the Lafayette Escadrille, and over fifty were killed. Members of the squad were honored with a monument dedicated in 1928. The monument was taken over by the ABMC in 2017.

The Battle of Normandy, sometimes known as the Battle of D-Day, is arguably America’s best-remembered overseas military engagement. The American cemetery at Normandy is one of the most visited in the world outside of the continental United States.  Over a million Allied soldiers, mostly Americans, participated in the famous landings.  The American efforts to take the beaches at Utah and Omaha are legendary among students of military history and World War II enthusiasts.

On June 6, 1944, the long waited Allied campaign to liberate France started. The initial phase of the battle was a nearly complete success, with almost all objectives taken.  Fighting in Normandy and Northern France continued throughout the summer, but was largely over by the time Paris was liberated in late August.  The area round Normandy is now dotted with American cemeteries and memorials, none more famous than the Normandy American Cemetery and Memorial.  This cemetery is primary destination for Americans to visit on major occasions such as Memorial Day and Independence Day.  Also nearby are the American Monuments at Pointe du Hoc and Utah Beach, as well as second cemetery at Brittany.

While the Battle of Normandy gets the lion’s share of attention among American battlefields of World War II, the Allied advance from Paris to the Rhine also deserves great respect. This operation, which lasted from the liberation of Paris until the following spring, witnessed numerous major battles and some of the highest casualty numbers for American forces in the European theater of World War II.

Fighting to clear the Nazis out of Eastern France was heavy, but despite significant losses the drive towards the Rhine was relentless. Even a large German force at the heavily fortified city of Metz held out for only a short time, and the German counter-offensive known as the Battle of the Bulge was a total failure.  Of the thousands of Americans killed in this campaign, more than ten thousand were buried at the Lorraine American Cemetery, the largest American cemetery in France from World War II.  Also nearby is the Epinal American Cemetery, where an additional five thousand are buried.