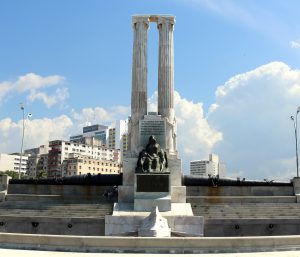 Often forgotten in the shadow of the American Civil War, the United States fought a number of major conflicts in the 19th century against various world powers that both established its dominance in the Western Hemisphere and contributed to its status as a world power.  Among these are the nearly forgotten Mexican-American and Spanish-American Wars, which between them saw American troops fighting throughout Central America and the islands of the Caribbean.  Unbeknownst to many Americans, there are monuments in a number of countries in the Americas that commemorate the United States armed forces.  These include Mexico and, amazingly, Cuba.  Here are five must-see places of interest for Americans travelling in these countries:

The sinking of the USS Maine played a pivotal role in the lead up to the Spanish American War. This conflict led to the final collapse of the four centuries old Spanish empire and comfirmed America’s ascension to the rank of a major world power.  Ironically, the sinking of the Maine may have simply been an accident.

On February 15, 1898, the USS Maine mysteriously exploded in Havana Harbor. Although nothing was proven, hawks in the United States blamed Spain and used the rallying cry “Remember the Maine” to drum up support for war.  The USS Maine Monument was erected in Havana in 1925 to commemorate the sailors and officers who lost their lives in the sinking.  It originally featured busts of William McKinley and Teddy Roosevelt, but these were removed in 1961 following the Communist revolution in Cuba.  The monument has since been renamed the Monument to the Victims of the USS Maine.

In 1898, an American army of about twenty thousand men was assembled near the key port city of Santiago at the eastern end of Cuba. This force included the Rough Riders, the Buffalo Soldiers, and several thousand Cuban guerilla fighters.  American and Cuban forces assaulted the San Juan Heights on July 1.  The Spanish suffered nearly one hundred percent casualties, though they killed or wounded over three thousand Americans in the defense.  Much of the battlefield has been preserved, including the American trenches, artillery pieces, and monuments to both the American and Cuban soldiers who participated in the battle.

The Santiago Surrender Tree was a ceiba tree in the Cuban capital of Santiago that was the site of several important meetings between the combatants in the last days of the Spanish American War. Early in 1898 it was used as a location for the exchange of prisoners.  As implied by its name, the forces of Spain in Cuba surrendered to the Americans here on July 17, 1898.

In 1958, the site was designated as an American monument. Despite the Cuban revolution shortly thereafter, which led to poor Cuban-American relations, the site has been maintained by the Cuban government.  The original tree, long dead, was replaced by the current tree in 1998 on the one hundredth anniversary of the battle.

The Battle of Chapultepec was the last major engagement of the Mexican-American War. By the latter months of 1847, the Mexican army was driven back into Mexico City.  Its last surviving forward outpost was Chapultepec Castle, which was garrisoned by a force of Mexican regulars as well as detachment of about two hundred cadets.  For two days the Americans bombarded the fortress, after which the commander of the garrison ordered a withdrawal back to Mexico City.  However, six cadets, all teenagers, famously refused the order, and proceeded to fight to the death.  The battle inspired two famous literary works: one which later became the Marine Corps Hymn, and Los Ninos Heroes, a popular Mexican poem honoring the six cadets.

Chapultepec Park is home to one of Mexico’s best and most interesting battlefield sites. The castle was rebuilt after the war, and in 1864 it was briefly made the residence and court of the Mexican imperial family.  Outside the castle, in the general area where the American assault took place, is the Monument to the Boy Heroes which commemorates the young cadets who died in defense of the capital.  Both the castle and battlefield are preserved in Chapultepec Park, one of the largest public urban parks in the world.

The Mexico City National Cemetery is not, as its name implies, the state cemetery of the nation of Mexico. Instead it is a cemetery established by the United States Congress a few years after the American victory in the Mexican American War.  Approximately fifteen thousand Americans were killed during the conflict, many while campaigning in Central Mexico.  After the war, land was acquired to bury over seven hundred unnamed dead, with a cemetery formally established in 1851.  It is now run by the American Battle Monuments Commission.

The Mexico City National Cemetery is small, about one acre, but over eight hundred American soldiers are interred here. Most of these are unknown and buried in a common grave.  However, there are a few marked gravesites, including that of General James Slaughter, who served in both the Mexican American War and the Civil War.