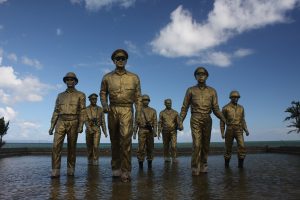 The United States military has fought in the conflicts in the Pacific as early as the 19th century.  However, it wasn’t until the massive campaigns against Japan during World War II that Americans became familiar with the region.  Today some of the greatest battles of the War in the Pacific have achieved legendary status in America’s military history, and many of these are now commemorated with monuments and memorials.  While often difficult to get to (a number of these memorials are located on distant and/or remote islands), they are still there, awaiting the intrepid American traveler to come and pay their respects to the fallen of the Second World War.

During World War II, the Philippine islands suffered terribly under two onslaughts: the first by the Japanese in 1941 and 1942, the other by the Americans in 1944 and 1945. Between these two campaigns, more than forty thousand Americans were killed, about ten percent of all American casualties during the war.  Nearly half of these are buried in Manila.  Many graves were consolidated at the Manila American Cemetery and Memorial in 1948.

The Manila American Cemetery and memorial is one of the largest American cemeteries outside of the United States, and home to the largest number of graves of American servicemen from World War II. Many Americans who died in the various Philippines campaigns, as well as other Pacific campaigns, are buried or commemorated here.  Probably the most famous memorial here is that of the Sullivans, five brothers who all served on the USS Juneau and who were all killed on the same day.

In the wake of the Japanese conquest of the Philippines and the infamous Death March of Bataan which followed, thousands of United States servicemen became POWs. Many of these were interred in, or at least passed through, POW camps north of Manila, the most famous of which was at Cabanatuan.  During the war, an estimated twenty thousand American and other Allied military personnel were incarcerated at Cabanatuan.  In January of 1945, a joint American-Philipino force liberated the camp, rescuing more than 500 prisoners from the possibility of massacre at the hands of their Japanese captors.

The Capanatuan American Memorial was opened in 1982 on part of the former grounds of the camp. Designed as a fenced-in compound evocative of the living conditions of the camp during the Japanese occupation, the flags of both the United States and the Philippines fly over a long wall upon which is inscribed the names of over two thousand former prisoners.

On March 12, 1942, with the collapse of American forces in the Philippines imminent, legendary general Douglas MacArthur was ordered to leave the island. According to legend, as he did so, he uttered his now famous phrase “I Shall Return” (in fact he apparently stated this more than a week later in Australia).  On October 20, 1944, MacArthur, who was placed in charge of the Philippines counteroffensive, returned to the Philippines at Leyte.  By the end of the war, American forces had largely driven the Japanese from the Philippines.  This campaign cemented MacArthur as one of the great American commanders of the 20th century.

The MacArthur Landing Memorial National Park was authorized by the government of the Philippines in 1977. The park, located at the sight of MacArthur’s 1944 landing, is actually primarily a protected wildlife habitat and refuge.  However, the park is also home to a unique monument, a series of seven statues at the water’s edge depicting MacArthur and his staff coming ashore.  At full tide the monument is partially underwater.

The Battle of Guadalcanal was the first major American counteroffensive against the Japanese during World War II. This sea, land and air campaign was one of the longest and bloodiest of the Pacific war, and led for the first time to Japanese loss of territory.  It also led to the loss of many irreplaceable Japanese warships that ultimately contributed to their further loss of islands across the Pacific.

The Guadalcanal American Memorial was inaugurated on the 50th anniversary of the beginning of the battle.  It honors all of those Americans who fought and died to liberate the Solomons in 1942.  Consisting of a series of stone monuments on a wide plaza, the memorial is located on the first hill to be taken by American forces during the battle.

The Battle of Iwo Jima was one of the few engagements of World War II which took place on Japanese soil. It is perhaps one of the best known American victories of the Pacific War, thanks in large part to the enduring legacy of the famous image of American marines raising the United States flag over Mount Suribachi at a climactic moment of the battle.  Defending their home territory for the first time, the Japanese proved to be a ferocious foe, taking nearly 100% casualties with virtually none surrendering.  The island is now covered with monuments which hint at the scope and ferocity of the battle.

The Mount Suribachi Memorial on Iwo Jima (not to be confused with the one at Arlington National Cemetery in Washington DC) marks the spot where marines raised the American flag over the island on February 23, 1945. It is one of many memorials and markers that cover the small island, virtually all of which is a shrine to the battle.  Some of the bunkers and tunnels have been preserved as well.