Since the outset of World War II, aircraft carriers have formed the backbone of the United States Navy. After 1945, these magnificent engineering wonders completely replaced battleships as the only capital ships constructed for combat.  There are approximately two dozen still afloat, including some in active service and some that have been mothballed.  Five are currently in use as aircraft carrier museums: 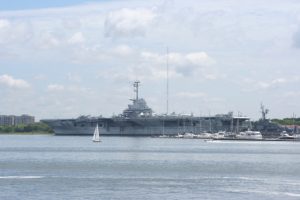 The USS Yorktown (CV-10) is the second oldest aircraft carrier currently afloat, although it has the lowest numeric designation.  Named after its predecessor which was destroyed at the Battle of Midway in 1942, the Yorktown was the second Essex class super carrier put into service in World War II.  It participated in many of the key naval campaigns of the Pacific War, notably the Battle of the Philippine Sea, and was among the ships which hunted down the Japanese battleship Yamato.  The Yorktown also saw service during the Vietnam War, and worked with NASA as a recovery ship for the Apollo Space Program.

The USS Yorktown received its final decommission in 1970.  Over its lifetime it earned eleven battle stars.  Redesignated and reopened to visitors in 1975, it is now part of the Patriot’s Point Naval and Maritime Museum.  This extensive museum is also home to the destroyer USS Laffey, the submarine USS Clamagore, and more than two-dozen aircraft from World War II through the Vietnam era, as well as the Congressional Medal of Honor gallery.  It is also close to Fort Sumter where the first shots of the American Civil War were fired.

The USS Intrepid (CV-11), or The Fighting “I”, is arguably the most visited aircraft carrier still afloat.  Commissioned in 1943, the Intrepid was rushed into service in the Pacific.  She participated in some of the war’s most famous actions, including the Battle of Leyte Gulf, the largest naval engagement in history.  The Intrepid was also instrumental in supporting the American invasion of Okinawa in 1945.  Like the Yorktown, the Intrepid saw service in Vietnam and was a recovery vessel for NASA’s Mercury and Gemini programs.  It was pressed into emergency service for a brief time following the World Trade Center attacks and used as a field headquarters for the FBI.  The Intrepid also featured prominently in the film National Treasure.

The USS Intrepid was decommissioned in 1974, after which it was brought to New York City and reopened as the Intrepid Sea-Air-Space Museum.  Dominating Manhattan’s Hudson River shoreline, it is by far the best known and most visited naval museum in the United States, with the largest collection of aircraft on any museum ship, including everything from a stealth aircraft, to a Concorde and a space capsule.  The museum is also home to the submarine USS Growler.

The USS Hornet (CV-12), the only other surviving sister ship of the Yorktown and Intrepid, has a history very similar to its more famous siblings.  Commissioned in 1943, its service in World War II took place in the Pacific theater, and it was present at the Battle of the Philippine Sea, the Battle of Leyte Gulf, and at the Marianas Turkey Shoot.  The Hornet’s most famous post-war moment took place in 1969, when it recovered Buzz Aldrin, Neil Armstrong and Michael Collins after the first moon landing.  The Hornet also has a reputation for paranormal activity, and is considered one of the most haunted ships in American history.

The USS Hornet was decommissioned in 1970 having won nine battle stars.  After being mothballed for nearly three decades, the Hornet was reopened to the public in 1998 as the USS Hornet Museum.  The museum is home to a number of aircraft, but is best known for its excellent collection of artifacts from the Apollo space program, one of the largest such exhibits in the United States.

The USS Lexington (CV-16), the Blue Ghost, was the longest-serving aircraft carrier in American history.  It was named in honor of its predecessor which was sunk at the Battle of the Coral Sea.  The Lexington fought in several major engagements of the Pacific war, including the Battle of Leyte Gulf and the Marianas Turkey Shoot.  She earned the nickname Blue Ghost because of its color and its apparent invincibility as it was thought by the Japanese to have been sunk on several occasions.  After the war the Lexington had a long career as a training carrier, and appeared in a number of films, including Midway (1975) and Pearl Harbor (2001).

The USS Lexington had been in service for 49 years, a record for America’s aircraft carrier fleet, throughout which time it earned eleven battle stars.  It was finally decommissioned in 1991, and reopened a year later as the USS Lexington Museum on the Bay in Corpus Christi.  In additional to the usual excellent collection of aircraft and related exhibits, the Lexington boasts what is believed to be the largest scale model exhibits in the United States.

The USS Midway (CV-41) was the first aircraft carrier to go into service following the end of World War II, having received its commission barely a month after hostilities ceased in 1945.  It also pioneered the Midway-class aircraft carrier that dominated the early years of the Cold War.  The Midway did not see military service until the Vietnam War, but had several prominent moments during this conflict.  Naval aviators from the Midway scored the first, and last, air-to-air kills of the war.  But the Midway is undoubtedly most famous for its role in Operation Frequent Wind, when Americans and friendly civilians from South Vietnam were evacuated from Saigon in 1975.  Among the most enduring images of the Midway are of the helicopters being pushed off of its deck in a desperate attempt to speed up the evacuation.  After Vietnam, the Midway participated in the liberation of Kuwait during Operation Desert Storm in 1991.

The Midway was decommissioned a year later, and spent a decade in the reserve fleet before being brought to San Diego and redesignated as a museum ship.  Of all the current aircraft carrier museum ships in the United States, the Midway is unique in that it is the only one that is not an Essex class and that did not see service in World War II.  Moreover, it is the only major naval museum that was primarily active during the cold war.  Although the USS Midway Museum is independent, it is located right next to the Maritime Museum of San Diego, which is home to a Soviet-era submarine and a number of older historic ships.