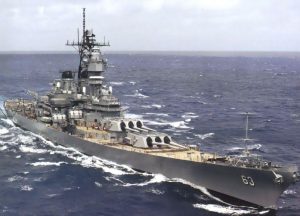 Between 1895 and 1945, the United States navy commissioned 64 battleships. A number of these have managed to escape Davy Jones’ locker and are now open to visitors.  From America’s oldest surviving battleship in Texas to two of the most famous battleships in Hawaii, here are five of the best battleship museums in the United States:

The USS Texas (BB-35) is the oldest surviving battleship of the dreadnaught era.  Commissioned in 1914, it is also the only remaining American battleship that saw action in World War I.  Between the wars it served as the American flagship, and was used for presidential escort duties in the Atlantic.  One of the few American battleships that was not at Pearl Harbor when the Japanese attacked in 1941, the Texas was one of the first in action, and was present at several of the largest amphibious engagements of World War II, including naval support of the Normandy invasion as well as the battles of Okinawa and Iwo Jima.

The USS Texas was decommissioned in 1948, but went on to an impressive retirement.  It was acquired by the State of Texas, where it was refurbished as America’s first battleship museum.  It was also the first World War II battleship to be declared a national monument.  In addition to being one of the largest battleships constructed prior to World War II, the Texas was also one of the first ships to boast most of the technological naval advances of the mid-20th century.  Over the course of her service the Texas earned five battle stars, and is one of the most decorated ships still afloat.  It is currently moored in the Houston Ship Channel where it is part of the San Jacinto Battlefield State Historic Site.

The USS North Carolina (BB-55), or Showboat, was one of the last battleships commissioned prior to America’s entry into World War II in 1941.  Originally scheduled to be sent to Pearl Harbor with the rest of the Pacific fleet, it narrowly avoided that disaster by being assigned to patrol duty on the east Coast instead.  It was rushed to the Pacific theater to relieve the devastated fleet at Pearl Harbor in 1942.  The North Carolina was the first American battleship to go on the offensive against the Japanese, and participated in countless engagements from Guadalcanal in 1942 to Tokyo Bay in 1945.  The North Carolina’s service ended almost immediately after the war, and she was permanently decommissioned in 1947.

The USS Alabama (BB-60), or Lucky A, was the first American battleship to be launched after the Japanese attack on Pearl Harbor.  Commissioned later in 1942, the Alabama’s first, assignment in the war was to work with the British navy in escorting convoys across the Atlantic.  The bulk of its service was in the Pacific theater, where it generally served as an escort ship to various aircraft carriers.  It participated in many of the major engagements towards the end of the war, notably at the Battle of the Philippine Sea.  The Alabama received the Lucky moniker due to the fact that it incurred virtually no damage and almost no casualties during the war.  She was one of the first American ships on the scene when the Japanese surrendered in 1945.

The USS Alabama was decommissioned in 1947, and after nearly two decades was transferred to Mobile and opened to the public.  Like the North Carolina, the Alabama is in nearly pristine World War II commission, thanks to its luck and quick removal from service.  For this reason it has appeared in a number of films and television shows.  The Alabama is now moored permanently at the Battleship Memorial Park in Mobile, along with the submarine USS Drum.

The USS New Jersey (BB-62), or Big J, was one of the longest-serving American battleships of the 20th century, and one of the last to be used in a combat capacity.  Launched on December 7, 1942, the one-year anniversary of the Pearl Harbor attack, the New Jersey was one of the chief battleships active in the Pacific theater.  It served as a flagship under several admirals, and witnessed action in a number of major campaigns.  After World War II it was decommissioned, only to be recommissioned for the Korean War.  This occurred twice more, once during the Vietnam War and again during the later years of the Cold War.  She received her final decommission in 1991.

The USS New Jersey was one of the last American battleships on active duty.  At its retirement it had earned over twenty battle stars and was the most decorated naval vessel in American history.  It also boasted the most advanced naval weaponry ever on a battleship, much of which can still be seen today.  The New Jersey is now permanently moored at the Battleship New Jersey Museum and Memorial in Camden.

The USS Missouri (BB-63), or Mighty Mo, was arguably the most famous American battleship of World War II, and the last to be in active service, having outlasted the New Jersey and Wisconsin by a few months.  One of the last battleships ever constructed in the United States, it was officially commissioned in 1944, just in time to participate in the final campaigns in the Pacific.  Although it saw nearly continuous action during this period, the Missouri gained fame not for its military service, but as the location where the Japanese formally surrendered to the United States, ending World War II.  It would later see service in both the Korean War and the Gulf War.  The Missouri was the last American battleship to ever fire its guns in combat.

The USS Missouri received its final decommission in 1991.  It was later moved to Pearl Harbor and refurbished as a museum ship.  Close by is the USS Arizona Memorial.  The Arizona, the most famous ship to be destroyed by the Japanese at the Battle of Pearl Harbor, lost nearly all of its crew during the attack.  The remains of the Arizona still lie at the bottom of the harbor, over which is a memorial to the men who died that day.  Together the Missouri and Arizona are among the most visited naval museums/memorials in the world.