Of all of the movie genres that have emerged from Hollywood over the years, none are as enduring, or beloved, as the holiday film.  While other movies are slowly forgotten, a good Christmas movie does not fade over time, but returns year after year, becoming an integral part of the holiday tradition.  Some films have become cult classics, creating a strange cottage tourist industry for those who wish to see where these movies took place, were inspired, were filmed, or ideally all of the above. 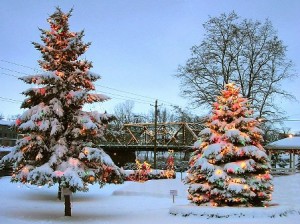 It’s A Wonderful Life (1946) is the most enduring legacy of famed Americana filmmaker Frank Capra, and nearly seventy years later remains one of the most popular films of the Christmas season.  Starring Jimmy Stewart, Lionel Barrymore and Donna Reed, it tells the story of a man who despairs of his life when he misplaces a large amount of money from the bank where he works.  His subsequent attempt at suicide and ultimate redemption is one of the great inspirational stories of all time, and has been recognized with countless awards and honors.

According to legend, Frank Capra passed through the town of Seneca Falls in 1945.  Residents insist that it was this visit that inspired the town of Bedford Falls.  It does not take much for fans who visit the town to quickly agree.  The town is dominated by a main street lined with Victorian era houses, including one that resembles the Bailey home.  At the edge of town the street crosses a truss bridge which bears a plaque honoring a townsman who leaped into the river in order to save a drowning girl.  There is also an early housing development which bears a resemblance to Bailey Park, as well as globe-style street lamps that look like they were lifted straight out of the movie.  Karolyn Grimes, who played Zuzu Bailey, declared the town to be Bedford Falls when she saw it for the first time.  Seneca Falls hosts an annual festival which features movie showings and other events every December.

White Christmas (1954) is the quintessential holiday musical.  Produced by Robert Dolan and starring Bing Crosby and Danny Kaye, this was a remake of sorts of the film Holiday Inn which offered Crosby a new venue in which to croon the title song, White Christmas, which remains the definitive pop Christmas tune.  The story revolves around two army buddies who travel to the town of Pine Tree, Vermont in order to save their former commanding officer’s floundering ski lodge.  The song is the big finale, and the film was a smash success.

Alas, the town of Pine Tree is fictional, as was the Columbia Inn.  However, these locations were based on the very real town of Manchester and the Worthy Inn, which was once a popular lodge.  The Snow Train, which featured prominently in the film, was also a real train line that ferried vacationers from Manhattan to Manchester.  Although the Snow Train and the Worthy Inn are now gone, Snow Valley remains and is as popular as ever.  The area around Manchester bustles with hotels and lodges, all of which compete to recapture the charm of the film, especially around the holidays.  A number of these inns have organized open house tours which are popular at Christmas time. 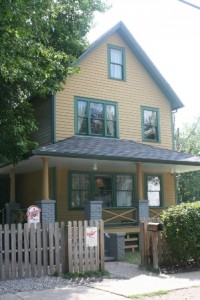 A Christmas Story (1983) is Bob Clark’s masterpiece and arguably the most popular movie shown on television during the holiday season.  Narrated by author Jean Shepherd and starring Peter Billingsley, this semi-autobiographical account tells the now familiar tale of a young Ralph Parker and his quest to acquire a Red Ryder BB Gun.  The movie, which is loosely based on episodes of Shepherd’s childhood, offers a fascinating snapshot of life in the 1940s.  Although not a big success at the time of its release, it has since become one of the most popular holiday movies of all time.

Although the movie is set in Hammond, Indiana, virtually all of the filming took place in and around Cleveland, Ohio.  A small house on 11th Street in the Tremont area was chosen for the filming of the exterior shots, and this has since become a Mecca for all things related to the movie.  In 2004 the house was acquired by a San Diego businessman, who renovated the interior into a near-perfect replica of the Parker house as it appeared in the film.  Everything is there, from the major award in the window to the bar of Life Boy soap in the bathroom.  A neighboring house has been turned into the Christmas Story Museum, which displays memorabilia from the movie. 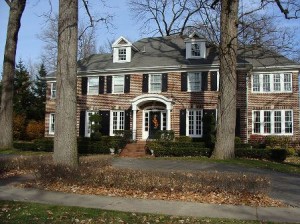 Home Alone (1990) was producer John Hughes’ great contribution to the Christmas genre, as well as his most successful film.  Starring Macaulay Culkin, it tells the story of a young Kevin McCallister, who accidentally gets left behind by his family when they depart for a holiday vacation.  Kevin discovers the true meaning of Christmas, and becomes a master of slapstick comedy, when he is forced to defend his house from a pair of less-than-competent burglars on Christmas Eve.  Although not well received by critics, it was a box-office smash hit and was for years the highest grossing Christmas film of all time.

Not surprisingly, John Hughes set Home Alone in his usual stomping ground, Illinois.  Most of the movie takes place in, and was filmed in, the Chicago area, primarily in the suburb of Winnetka north of downtown.  The house used for the McCallister Home is located on Lincoln Avenue, and the exterior shots, as well as some of the interior shots, were taken here.  Also in Winnetka are the Grand Food Center and the Hubbard Woods Pharmacy on Green Bay Road.  The Grace Episcopal Church, which features prominently in the movie, is further south in Oak Park. 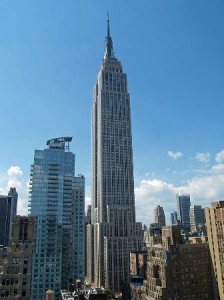 In reality, few places in America embrace Christmas as enthusiastically as New York, and locations all over the city have been used for filming.  From Miracle on 34th Street, fans can still visit the iconic Macy’s flagship store on 34th Street, while both the New York Supreme Court building and Bellevue Hospital were both used for exterior shots.  From Elf, fans will recognize many locations in Central Park, Grand Army Square, Rockefeller Center and the Empire State Building, though Gimbels is unfortunately long gone.  Both films have footage of Central Park West; 55 CPW was the location of Buddy’s apartment.  Of course, no Christmas trip to New York City would be complete without a drive through the Lincoln Tunnel!