Those who have journeyed throughout Europe know that it is almost impossible to get around without tripping over castles every few miles. At least a thousand castles and fortresses, from magnificent structures to crumbling ruins, are peppered throughout the Old World. Not so the New, where powerful gunpowder weapons made fortresses obsolete almost from the outset of the colonial era. That’s not to say that America isn’t without its share of impressive and daunting fortified places. Here are five of the best, in order of the wars that they each is associated with: 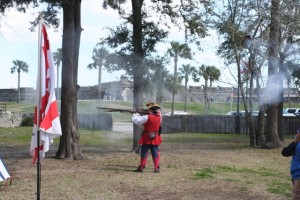 The Castillo de San Marcos is the oldest stone fortress still standing in North America, as well as one of the largest. Constructed by the Spanish empire to guard the northern frontier of its New World territories, the strategic Castillo became a focal point in the colonial wars between Spain and England. It endured several sieges in the early 18th century before finally being ceded to England in 1763. The Castillo de San Marcos changed hands several more times between England and Spain before finally being turned over to the United States in 1819. The Castillo was used throughout the 19th century as a prison before being decommissioned as an American military institution in 1900.

The Castillo de San Marcos is a nearly perfect example of a 17th century star fort. Overlooking the convergence of the Matanzas River and the St. Augustine Inlet, it guards the waterway approaches to the city. The thick walls built from coquina stone and the diamond towers in the corners are in nearly pristine condition and boast a full battery of antique cannon peeking out from the parapets. Most of the Castillo’s interior rooms, including the barracks and a well secluded powder magazine, have been restored and are open to visitors. The site is now run by the National Park Service.

Fort Ticonderoga in upstate New York was originally built by the French to guard their territory in North America from the British to the south. Together, Fort Ticonderoga, or Fort Carillon as it was originally known, and the Castillo de San Marcos effectively book-ended the British colonies in America during the mid-18th century. Fort Ticonderoga saw considerable action during both the French and Indian War as well as during the American Revolution. It was the site of a major battle between the French and English in 1758, and it was occupied by the English in 1759, barely two years after its completion. American forces under Benedict Arnold and Ethan Allen captured Fort Ticonderoga from the British in 1775. It was abandoned in 1781 as the American Revolution drew to a close.

Fort Ticonderoga is another classic colonial era star fortress. Crowning a hill close at the southern end of Lake Champlain, it was designed to guard the French frontier from British naval incursions sailing up the Hudson River from New York City. Much of the fortress fell into disrepair in the 19th century, but has undergone regular and considerable renovations since the 1930s. It is now largely restored, from the outer walls to the trio of barrack houses which surround the green common area at the heart of the fort. It is now cared for by the private Fort Ticonderoga Association. 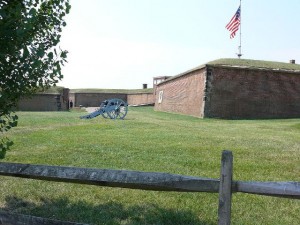 Fort McHenry was one of the earliest military fortifications built by the United States government. Constructed to protect the city of Baltimore from naval attack, it was put to the test less than a decade after its completion. In September 1814, a British fleet bound for Baltimore subjected the fort to a 24-hour bombardment. The fort suffered only light damage and few casualties, and the invasion fleet was forced to turn back. This battle, one of the few major American victories of the War of 1812, was immortalized by Francis Scott Key, who witnessed the engagement from aboard a nearby ship. Key made the battle, and the survival of its flag, the subject of the national anthem. The fort subsequently served as a prison during the Civil War, as an army hospital during World War I, and as a coast guard base during World War II.

Fort McHenry was constructed towards the end of the Napoleanic era, when artillery was become too powerful for masonry fortifications to withstand. Although built along the classic star-fort pattern, it relies much more heavily on earthworks designed to absorb gunfire. Because it was used for a variety of purposes up until the middle of the 20th century, Fort McHenry has been fairly well preserved. The fort’s museum boasts a collection of famous American flags, including the original “Star Spangled Banner” which inspired the national anthem. The site is now run by the National Park Service. 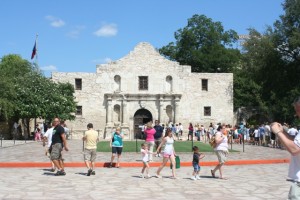 The Alamo, America’s most famous fort, was not in fact built as a fort, but rather as a Catholic mission which was later occupied by the Mexico for use as a garrison outpost. Although fortifications and barracks were added in the late 18th century, it was never meant for heavy military duty. Ironically, the Alamo went on to endure the most famous siege in American, or at least Texan, history in 1836, when fewer than 200 irregular troops managed to hold out against thousands of professional Mexican soldiers for the better part of two weeks. Although the Alamo’s defense was eventually overwhelmed, the action stalled the Mexican army long enough to allow Texas to regroup and exact their revenge a little over a month later. The Alamo was retained for military use for the next forty years, then turned over to the state of Texas in 1876. It is now Texas’ most important and popular historic attraction.

The Alamo mission was originally constructed in the early 18th century. Fortifications, such as they were, began to be added in the 1750s, and were constructed adjacent to the existing stone chapel. After years of neglect, the Alamo grounds were systematically renovated throughout the 20th century. The site is now largely restored to its state at the time of the battle. Although perhaps less visually impressive than the other fortifications on this list, it is nevertheless America’s most visited, and arguably its best loved, historical fortress. The Alamo is now overseen by the Daughters of the Republic of Texas. 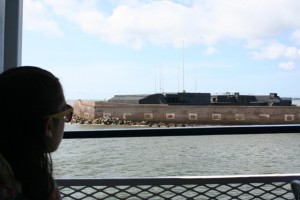 Fort Sumter was constructed in the wake of the War of 1812 as a defense for the city of Charleston against the threat of naval assault. Substantially completed in the 1830s, construction was still ongoing at the outbreak of the American Civil War. Fort Sumter is best known for being the place where the Civil War began. A Union bastion just offshore from South Carolina, the first state to secede, Fort Sumter bore the brunt of the first Confederate assault. Following more than thirty hours of bombardment, the Union army surrendered the fortress on April 13, 1861. Interestingly, none of the defenders died during the battle. Fort Sumter was the site of several other battles, until it was recovered by the Union army in 1865. It was later used sporadically for other military purposes as well as for a lighthouse.

Fort Sumter stands on a small, rocky island in the center of Charleston Harbor, where it was safe from a land assault. A no-nonsense, blocky affair, Fort Sumter is little more than a massive, multi-tiered battery of cannon surrounded by a wall. Largely destroyed during the Civil War, most of the modern fort actually dates from the later 19th century. A variety of artillery pieces adorn the casements. The Fort Sumter museum is actually located on the mainland, and features historical exhibits on the history of lead-up to the war. The site is now under the auspices of the National Park Service.