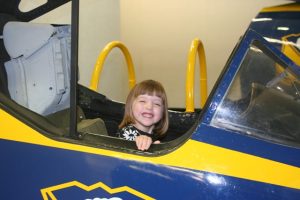 America’s love affair with aviation began immediately after the first Wright brother’s flight in 1903. The fascination with military aviation began during the First World War, which saw America’s first flying aces, such as Eddie Rickenbacker, emerge as national heroes.  It continued into the Second World War, the Cold War, and ultimately into the Space Race.  Now, a century of military and space aviation has been immortalized by countless museums across the United States.  Here are five of the best:

The National Museum of the United States Air Force is the oldest and largest aviation museum in the world.  Located at Wright-Patterson Air Force Base, one of America’s most important military installations, it precedes the Smithsonian Air and Space Museum in Washington by more than half a century.   Founded within a few years of the end of the First World War, the National Museum has been collecting aircraft and related artifacts throughout almost the entire history of military aviation.

The museum is home to over 300 airplanes and thousands of other objects stretching from the Wright Brothers to the modern era.  Virtually every class of military aircraft is represented, including many from foreign countries.  Just a few of the highlights include a biplane used by the Lafayette Escadrille, the first American air unit ever to see combat; the Bockscar, which dropped one of the atomic bombs over Japan; the Memphis Belle; and the presidential plane on which Lyndon B. Johnson was sworn into office after the Kennedy assassination.  Also on display are uniforms worn by servicemen from Billy Mitchell to Jimmy Stewart to Ronald Reagan.

The National Naval Aviation Museum is the Navy’s answer to the National Museum of the U.S. Air Force.  Located at the Naval Air Station in Pensacola, which is also home to the world famous Blue Angels fighter squadron, it is the largest museum dedicated exclusively to naval air power in the United States.  It is also home to the Naval Aviation Hall of Honor, which honors everyone from former naval airman such as Neil Armstrong and George Bush Sr. to leaders like Admiral William Halsey to inventors like Igor Sikorsky.

The museum has a collection of over 150 aircraft, primarily featuring planes and artifacts from World War II and the Cold War.  Virtually every model of naval aircraft ever used in the United States is represented, with some odds and ends thrown in, including one of the last surviving World War I German Fokker DVIIs and British Sopwith Camels.  Also on display is a helicopter which formerly served as Marine One.  A quartet of Blue Angel jets is on display suspended from the main atrium.  However, even better than this, on certain days lucky visitors may be treated to views of actual Blue Angel training flights.

The Kennedy Space Center is the world’s largest space launch facility in the world, and is first and foremost a working government installation.  However, it is also home to the largest collection of spacecraft and related artifacts in the world, and the center has been a huge tourist draw since the 1960s.  Opened in 1962, it has been home to virtually every major space launch in American history, including every dingle manned space launch.  The Kennedy Space Center is immense, with numerous museums and historic sites that can be reached only by official vehicles but are otherwise open to the general public.

At the main entrance is the visitor complex, where many of the center’s best outdoor displays can be found.  In the “Rocket Garden” are vertically assembled rockets from the Atlas, Titan and Saturn programs, and nearby is the Space Shuttle Atlantis on permanent display and available for walk-through tours.  Other popular attractions on site are the Apollo/Saturn Center, where an entire Saturn rocket broken down by stages is on display; the U.S. Astronaut Hall of Fame; and the Vehicle Assembly Building, one of the largest structures in the world.

The San Diego Air and Space Museum is the largest institution of its kind on the West Coast.  Located in the old Ford Building at the world famous Balboa Park museum district, this museum had moved around several times.  It’s previous home, as well as most of the aircraft, were destroyed in a fire in 1978.  Some one-of-a-kind historic craft, including the Wee Bee, the smallest manned plane ever built, were lost.  New planes were eventually acquired for the collection, but unfortunately some of the most famous planes were replaced only by replicas or reproductions.

There are, however, many authentic craft, the oldest being a World War I Sopwith Pup.  There are more originals from World War II and onward.  The SDASM has many exhibits about the inner workings of planes, including more exhibits and aircraft cutaways than are typically on display at these kinds of museums.

The National Air and Space Museum at the Smithsonian Institution is the definitive aerospace museum of the United States, if not the world.  The successor to an earlier National Air Museum, the NASM was founded in the 1970s both to accommodate the growing interest in space exploration as well as the growing collection of aircraft and artifacts that were beginning to overflow from the original museum.  A new building was constructed in the 1970s and was quickly filled with some of America’s most historic air and spacecraft.

The collection includes exhibits from over a century of flight.  Most of the displays are from World War II and afterwards, but two of the oldest planes are among the most popular: the original 1903 Wright Brothers Flyer, the first successful heavier than air craft, and the 1927 Spirit of St. Louis, the first plane to fly across the Atlantic.  But the centerpiece of the entire museum is the Apollo 11 Command Module, the space craft which took American astronauts to the first moon landing in 1969.

Intrepid Sea-Air-Space Museum (New York City, New York) – Located on and in the retired aircraft carrier USS Intrepid permanently moored in the Hudson River, this museum features military aircraft and will soon be home to the space shuttle Enterprise.

Pima Air & Space Museum (Tucson, Arizona) – The largest privately owned aerospace museum in the United States, this huge collection of over 300 aircraft is known for several bombers on display which cannot be viewed elsewhere.

Flying Leatherneck Aviation Museum (San Diego, California) – Dedicated specifically to the air wing of the Marine Corps, this smaller museum has a solid collection of aircraft, including one of the last helicopters to escape from the embassy in Vietnam.

Wright Brothers National Memorial (Kitty Hawk, North Carolina) – This is not a museum, per se, but America’s ultimate pilgrimage destination for lovers of flight history. The original hangar and airfield can still be visited.