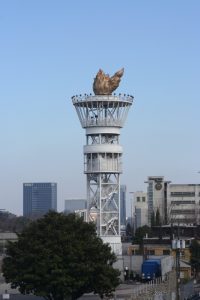 On July 23, the Games of the XXXII Olympiad will open in Tokyo, temporarily uniting the world once more in the spirit of friendship and sportsmanship of the Summer Olympics. Even Americans, who are usually aloof when it comes to international sports, get caught up in Olympic fever, and we have the history to prove it.  The United States has hosted eight Olympic games, four Summer and four Winter, and these have left a legacy of monuments, stadiums and memories that stretch from Lake Placid to California.  Following are some of America’s most famous and historic Olympic sites:

The 1904 Summer Olympics, the third to take place and the first in the United States, was an organizational disaster and almost marked the end of the modern Olympics.  Treated as an appendage of the World’s Fair, the games were held on an ad-hoc basis that lasted almost half a year.  Athletes from only twelve other countries attended, and these were collectively outnumbered by the American participants.  Whites were pitted against non-whites in demonstration events.  The gold medal for the marathon was temporarily awarded to a man who had only completed nine miles of the race.  In short, the third Olympics was a debacle.

Nevertheless the games made their mark on St. Louis and on Washington University, beginning the tradition of using the Olympics as an opportunity for civic improvements and campus expansions.  Named for David Francis, the former governor of Missouri, Francis Field, and the adjacent Francis Gymnasium, was the first Olympic venue to be built in the United States and is one of the oldest sports arenas still in use in the Midwest.  In addition to being home to the Washington University Bears football team, Francis Field has hosted other Olympic events, presidential debates, and witnessed the torch relays of 1984 and 1996.  Francis Field is a National Historic Landmark.

Lake Placid is the only location outside of Europe to have hosted the Winter Olympics twice, once in 1932 and again in 1980.  The 1932 winter games, the first in the United States, were hosted by then governor of New York Franklin Roosevelt.  However, it was the 1980 games that have probably witnessed America’s most famous, if not greatest, Olympic moment.  In what has since become known as the Miracle on Ice, the United States men’s hockey team defeated the extremely heavily favored team from the Soviet Union.  They subsequently went on to defeat Finland for the gold medal.

Herb Brooks Arena, formerly known as the Olympics Center, was built for the 1932 games and is the oldest winter Olympic venue in the United States.  It was here at the Olympics Center that the American hockey victory took place in 1980.  The arena was renamed in 2005 in honor of the team’s coach.  The rink is still in use, both for figure skating and hockey events.  A number of men’s and women’s college hockey championships have taken place here since the 1970s.

The city of Los Angeles has hosted the Summer Olympics twice, in 1932 and in 1984.  Both events became famous for international events which prevented many nations from competing.  The 1932 games were marred by the Great Depression, which prevented many countries and athletes from participating due to the financial crisis.  The 1984 games witnessed a boycott which kept many of the world’s most prominent Olympic powers from competing.  The two Los Angeles games were also among the very few to both turn a profit.

One of the greatest legacies of the 1932 games is the Los Angeles Memorial Coliseum.  Originally known simply as Olympic Stadium, the coliseum was used to host the opening and closing ceremonies of both games, as well as many events.  After eight decades it remains one of America’s premier sports venues.  It has been home to both professional baseball and football teams, hosted World Series and Super Bowl games, and is currently the home stadium of the USC Trojans, one of the greatest college football franchises.  Even Pope John Paul II gave mass here.  The great torch, built for the 1932 games, is still regularly used at major sporting events and other special occasions.

In 1996 the city of Atlanta hosted the Olympics on the 100th anniversary of the modern era.  The games were rocked by allegations of bribery and a terrorist bombing at Centennial Olympic Park, but were pulled off in grand style.  The most recent Summer games hosted by the United States, it was the largest Olympics held to date, with 197 countries sending athletes to participate.  It also witnessed perhaps the most memorable torch lighting in history, with the final honor going to boxing legend Muhammad Ali.

Centennial Olympic Stadium was built to host the games and was the site of the opening and closing ceremonies.  After the games it was almost immediately renovated to accommodate baseball games, at which time it became known as Turner Field. It has since been home to the Atlanta Braves.  Nearby in downtown Atlanta is Centennial Olympic Park, where the Olympics are permanently commemorated by monuments and the display of the flags of former host countries.  On the north side of the city, the Atlanta History Center is home to an excellent, permanent exhibit on the Olympics, with many artifacts and souvenirs of the Atlanta games on display.

The 2002 Winter Olympics took place at a difficult time for the United States, occurring barely five months after the terrorist attacks of September 11, 2001.  The opening ceremony was the first major international event to take place after the attacks, and it doubled as commemoration of the victims of that terrible event.  The torch was collectively lit by the members of the 1980 men’s hockey team.

Rice-Eccles Stadium, the centerpiece venue of the games, is the only Olympic arena in the United States that was not built for the event.  The original Rice Stadium was erected in 1927, and completely renovated and expanded in the 1990s.  It was temporarily renamed Rice-Eccles Olympic Stadium for the duration of the games.  Just outside of the stadium is the Salt Lake 2002 Olympic Cauldron Park, which is home to the great Olympic torch, as well as a museum of the games.

Squaw Valley Ski Resort (Squaw Valley, CA) – Home to the 1960 Winter Olympics, little remains of the games venues; however, Squaw Valley remains one of the most popular ski and winter recreation areas in the United States.

USOC Headquarters (Colorado Springs, CO) – This surprisingly extensive complex is home to the United States Olympic Committee, as well as some of the best athletic training facilities in the world for both summer and winter sports.