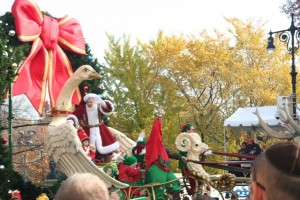 Santa Claus is, for all intents and purposes, the definitive tradition of the Christmas season, with the exception of the celebration of the Nativity of course.  This is especially true in the United States, where Santa Claus and everything related has become a holiday institution of unequaled stature.  Borrowed from the European traditions of St. Nicholas and Father Christmas, the person of Santa Claus is celebrated throughout the season and in some places year round.  For those who can’t get enough of the jolly old elf, here are some places where the spirit of Santa Claus is at its best. 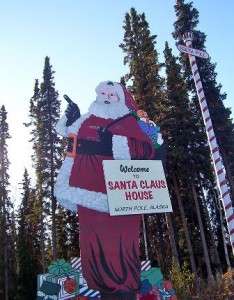 The Santa Claus House outside of Fairbanks has been in business since the early 1950s, besting its rivals in Canada and Scandinavia by decades.  Although the Santa Claus House receives many visitors annually, its primary claim to fame is as a postage hub for letters and packages from Santa.  The Santa House began as a small trading post built by the now locally famous Miller family.  Over time, it morphed from its original incarnation as a general store into a world-famous Bavarian style Christmas emporium.  Visitors are greeted by an enormous four-story fiberglass Santa Claus as well as a small home-grown herd of reindeer.

The interior of the Santa Claus House is the nerve center of a major postage and shipping operation.  It doubles as the local post office.  There is a wide variety of merchandise on sale, all of which can be shipped with genuine North Pole postmarks.  To date over a million Santa letters have been sent out since the Santa Claus House opened.  Periodically throughout the year, Santa Claus himself holds court, usually during various holidays as well as the weeks leading up to Christmas. 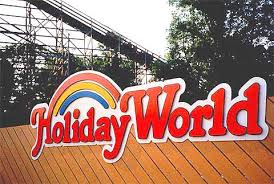 The town of Santa Claus, Indiana is a permanent civic tribute to the jolly old elf.  Formerly Santa Fe, the town’s name was changed to Santa Claus in 1856 due to a postal service conflict.  In the century and a half since, the entire town has become one giant homage to Santa Claus and Christmas.  Everything from the street names to the specialty retail establishments keep the holiday season alive year-round here.  Santa Claus, Indiana has been one of the most popular places in America for children to send their letters to Santa since the early 20th century.  In the 1930s Christmas-related retail establishments began popping up all over the town, including the Holiday World amusement park.

Holiday World claims to be the world’s oldest theme park.  Opened in 1946 as Santa Claus Land, it predated Disneyland in California by almost a decade.  It is a permanent tribute to Christmas, with decorations and visits with Santa Claus throughout the warmer months of the year.  In 1984 the name was changed to Holiday World and incorporated new sections for Independence Day, Thanksgiving Day and Halloween.  It is now one of the most successful, independently operated theme parks in the Midwest. 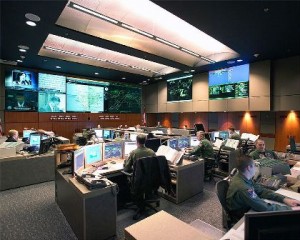 One of the world’s strangest Christmas Eve traditions, and in recent years one of the most popular, is the Santa Claus Tracker.  Sponsored and maintained by volunteers at NORAD, it is Christmas Eve’s most popular website as millions of children around the world eagerly check for Santa’s current location.  It began in 1955 by accident, when a Sears store in Colorado advertised a phone number which local children to use to talk to Santa Claus.  However, the newspaper accidentally printed the hotline number for the operations director at NORAD.  The local officer on duty ordered his staff to take the calls and offer updates, and thus a major public relations tradition was born.

Over the next few years NORAD began offering its own hotline, ultimately transitioning over to the world wide web in 1997.  As of 2006, its 50th anniversary, the Santa Claus Tracker has generated over half a million phone calls and over a billion web hits from 200 countries and territories around the world.  While the NORAD Santa Tracking Operations Center is located in Colorado Springs, it is part of a major military installation and generally not open to the public.  However, the real fun is following Santa’s progress on the web which can be done from almost any computer on the planet. 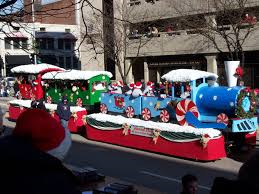 Christmas parades, which are an integral part of the holiday season in America, had their humble beginning not in New York, but in Peoria.  It was in this unlikely small city that the country’s first recorded Christmas parade took place in 1887.  This was not meant to be a holiday procession, but rather a celebration for the construction of a new bridge. However, the parade took place during the holiday season and had a Christmas theme, and the rest was history.  The next year the parade was back by popular demand and was even more popular than the first one, and is counted as the first official Christmas parade in American history.    The third installment in 1889 cemented the Peoria parade as a permanent fixture of the holiday season.  It was in this year that the first floats appeared, along with circus wagons, fireworks and live animals, including reindeer.  It was also the first time the Santa Claus appeared in the parade.  In 1958 the Peoria parade, by then titled the Santa Claus Parade, made its first television appearance.  Well over a century after its inception, the Peoria Santa Claus Parade is still going strong as a major holiday tradition in Illinois.  It usually takes place on the Friday following Thanksgiving. 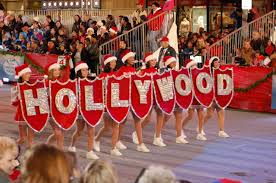 As Christmas parades go, few are as relatively star-studded as the Hollywood Santa Parade.  Formerly known as the Santa Claus Lane Parade and Hollywood Christmas Parade, this tradition dates back to 1928.  Hollywood’s elite, from big name stars to up-and-comers to favorite old-timers march for over three miles along Sunset Boulevard and Hollywood Boulevard as a celebrity honor guard for Santa Claus as he ushers in the Tinseltown holiday season.

The parade was originally established as a counterpart to the highly popular Macy’s parade in New York, and has been deliberately scheduled on a different day so that Santa would not have a conflict.  According to tradition, actor and singer Gene Autry was inspired to write the classic holiday song Here Comes Santa Claus while marching in the parade in 1946.  It traditionally takes place on the Sunday following Thanksgiving.