For those who love ships, but hate all those pesky modern conveniences like motors and GPS navigation tools, relics of the golden age of sailing can still be found at ports around the world. The United States boasts many of the best surviving sailing ships of the 18th and 19th centuries, from merchant vessels to whalers to warships, and these can be found in harbors and museums from New England to California.  These are some of the most magnificent and historic wooden craft still afloat in American waters: 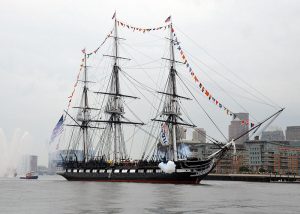 The USS Constitution, a late colonial era frigate, is America’s most famous sailing ship.  Completed in 1797, it was one of the earliest vessels commissioned by the United States navy.  It was also one of America’s most accomplished warships, and saw service during the Napoleanic Wars, Barbary Wars, the War of 1812 and the Mexican War.  It earned the nickname Old Ironsides during the War of 1812 after defeating numerous British warships in battle.  It continued to see use throughout the 19th century, for naval training, ambassadorial missions and goodwill tours.  In the early 1900s it was redesignated for use as a museum ship, the first in the United States.  However, it has never been decommissioned, and is still theoretically available for use by the United States Navy.

The USS Constitution boasts numerous records and accomplishments.  It is the oldest commissioned vessel in the United States navy, and one of the oldest commissioned warships anywhere in the world.  It is also one of the oldest ships afloat that can still sail under its own power, having performed just such a feat in 1997 on its 200th birthday.  The Constitution has an honorary crew which takes care of the ship and keeps it open for tourism.  It is now permanently moored at the Charlestown Navy Yard in Boston and is one of the monuments located along the Freedom Trail.

The Charles W. Morgan, the world’s oldest existing whaling ship, is every Moby Dick lover’s dream.  Named after the man who originally commissioned it, it went into service in 1841 and remained in use for nearly a century.  Amazingly, it was a fully functional whale processing ship for nearly all of that time.  It was also put into use for on-location filming by several Hollywood studios during the silent era.  Pre-dating the publishing of Herman Melville’s classic novel by seven years, it was ships like the Charles W. Morgan that heavily influenced the conception of the Pequod.

The Charles W. Morgan was permanently moored at Mystic Seaport in 1941, exactly one century after its initial launch.  Fully restored in the 1960s, and currently undergoing new renovations, it is considered to be one of the oldest best preserved ships in the world.  It is now part of the Mystic Seaport Maritime Museum, which is home to more than a dozen ships from the 19th and early 20th centuries.

The USS Constellation was one of the last and largest wooden frigates ever built by the United States navy.  Completed in 1854, it saw much use in the years leading up to the American Civil War, primarily for disrupting the African slave trade.  Interestingly, the Constellation’s service during the war was largely limited to patrolling for Confederate raiders on the far side of the Atlantic.  From the end of the Civil War until its decommissioning in 1933, it served as a training ship, a relief supply ship, and as a diplomatic ship.  It later enjoyed a brief revival as a relief flagship in the Atlantic Theater during World War II.

The USS Constellation received its final decommission in 1955, a little more than a century after its completion.  A few years later it was permanently moored in Baltimore harbor as a museum ship.  It was restored again in the 1990s, and is now the only surviving American naval warship from the mid-19th century.  It is part of the Historic Ships of Baltimore Museum, which is also home to a trio of 20th century military craft.

The Star of India is one of the greatest surviving 19th century windjammer ships, the largest class of merchant sailing ships ever constructed.  Launched in 1863, it became a regular fixture along the trade routes of the British Empire.  It made regular voyages between England and the Far East, including nearly two-dozen trips around the world, carrying passengers and exotic cargos to all corners of the globe.  Later acquired by American shipping interests, it spent much of the early 20th century making runs between California and Alaska.  It was finally taken out of service in 1926 and brought to San Diego harbor, where it was later converted into a museum.

The Star of India is the world’s oldest iron-hulled, masted sailing ship still in service.  It is also one of the oldest ships in the world that is still considered seaworthy, and which makes occasional if infrequent day trips out to sea.  It is also one of the largest surviving ships of the 19th century.  Although much of the ship was renovated in the 1950s, 60s and 70s, most of the ship dates from its original construction.  It is now part of the Maritime Museum of San Diego.

The Elissa, a masted barque merchant vessel, dates from the end of the golden age of sailing ships.  Finished in 1877, it sailed in the service of a number of different countries, including Great Britain, Norway and Sweden.  Interestingly, it saw almost no service as an American ship prior to being recognized as an historic landmark.  The Elissa’s long but uneventful history almost ended in a Greek shipyard before it was acquired in 1975 by the city of Galveston.

In Texas the Elissa was completely refurbished and put on display at the Texas Seaport Museum.  Unlike most other surviving 19th century ships, the Elissa is fully functional, and has made the round trip to New York City as recently as the 1980s.  Although not a museum ship, the Elissa is open to visitors when it is not in use.  It is currently under the care of the Galveston Historical Society.

USS Philadelphia (Washington, DC) – A Revolutionary War era gunboat recovered from the bottom of Lake Champlain; it is now on display at the National Museum of American History at the Smithsonian Institute.

USS Cairo (Vicksburg, Mississippi) – A Civil War Ironclad sunk by a torpedo in 1862; it was recovered from the bottom of the Mississippi River and now on display at the Vicksburg National Military Park.

Peking (New York, NY) – Early 20th Century Barque merchant vessel which once made regular merchant runs to destinations in the Orient; it is now on display at the South Street Seaport along with a number of other historical ships.