From the earliest days of its founding to the present, America has a great and rich maritime tradition.  This blended with America’s proud religious tradition, and the result was the construction of churches near harbors all along the coasts, dedicated to serving the needs of brave and lonely merchantmen.  In the 18th and 19th centuries, many of America’s ports and harbors boasted some form of maritime chapel, and some of these have survived.  Memorialized in literature and song, there are few occupations as closely associated with churches than those who work in the maritime industries. 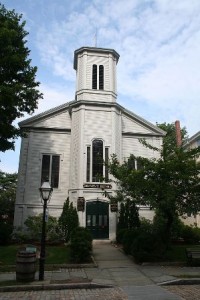 Seaman’s Bethel may be the most famous maritime chapel anywhere in the United States, thanks to its association with the author Herman Melville and his immortal classic, Moby Dick.  It was built in 1832 specifically for use by sailors and merchantmen who called on the port, particularly whalers.  For many years it was a tradition for whalers to visit the chapel before embarking on long voyages.

In 1851, Herman Melville set part of his story at the chapel, calling it the Whalemen’s Chapel in the book.  A new pulpit was added in 1961 matching the famous pulpit described in Moby Dick.  Melville is commemorated here on the pew which he sat when he attended church here in 1840.  The names of many whalers and fishermen from the New Bedford area who died at sea are noted on the walls. 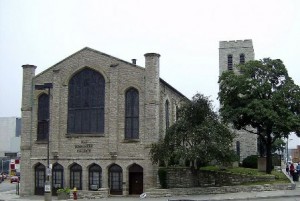 The Mariner’s Church in Detroit will forever be known for its association with the sinking of the SS Edmund Fitzgerald.  The congregation was founded in 1842 to serve those who worked on the Great Lakes, and the church itself was built in 1849.  In the years leading up to the American Civil War, the Mariner’s Church was an important stop for slaves seeking freedom along the Underground Railroad.

In 1975, the SS Edmund Fitzgerald, one of the largest freighters working on the Great Lakes, was sunk in a storm.  The lives of all 29 seamen were lost.  The sinking is considered the greatest maritime disaster in the history of the Great Lakes.  The memorial service for the sinking took place at the Mariner’s Church.  Both the event and the church were later immortalized in the song the Wreck of the Edmund Fitzgerald by Gordon Lightfoot. 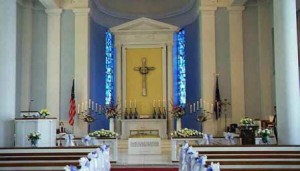 The Mariner’s Chapel at the United States Merchant Marine Academy is an institution reminiscent of the chapels at the various military academies.  The USMAA was founded in 1943 to better train merchant marine officers.  There was an especially high need for such training during World War II, when large numbers of American merchant vessels were lost to German U-boats and other hazards of the war.

The campus chapel was constructed in 1961 in order to meet the spiritual needs of the midshipmen.  In addition, it commemorates those brave American merchantmen who lost their lives at sea during the two World Wars.  The Mariner’s Chapel remains a popular location for private events related to merchant marine activities, including weddings and funerals. 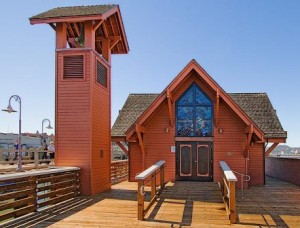 The Fisherman’s and Seaman’s Memorial Chapel is one of the historic treasures of Fisherman’s Wharf in San Francisco.  Although there were earlier chapels, the current building was constructed in 1981 on the site of a former Coast Guard installation.  It actually stands out on a specially built pier that juts into the harbor close to the wharf’s main commercial areas, as well as close to the boat docks.

The chapel was built to commemorate the many sailors and merchantmen from San Francisco who have died at sea over the years.  Every October, it plays a role in the annual Blessing of the Fishing Fleet, organized by the city’s Saints Peter and Paul Church.  A memorial service at the chapel is followed by a parade of boats.  The next day, the harbor is sprinkled with holy water and prayers said for a plentiful and safe year for the fishermen.

The Maritime Chapel near Houston is a chapel on the water, a throwback to the 18th and 19th centuries when many maritime churches were built on barges and moored in the ports of major cities.  Perhaps more aptly described as a church where services are held at sea, the Maritime Chapel was founded in 1978 by an ordained minister of the Universal Life Church.

The primary mission of the Maritime Chapel is to provide ministry to those who work in the Gulf of Mexico as well as burial at sea services.  It is one of the few civilian organizations in the United States authorized to do the latter.  These services are provided both to those who work at sea as well as to anyone else.  The chapel is known for offering inexpensive and free funerals for those whose families can’t afford a full service.