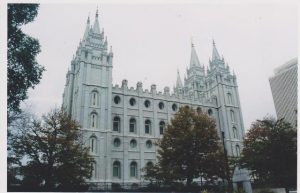 The Church of Jesus Christ of Latter-Day Saints, or the Mormon Church as it is more commonly called, is the largest completely home-grown American Christian denomination. Founded in 1830 by Joseph Smith, this unusual movement had an adventurous if rough early history.  Begun in New York state, its members moved several times ever westward across the American frontier, ultimately settling in what is now the state of Utah.  In their wake they left a trail of churches and places of interest that are now important Mormon pilgrimage destinations.  While most Mormons will endeavor to visit the great Mormon Temple in Salt Lake City at least once in their lives, visiting the following locations is now part of many church member’s bucket lists.

The Palmyra Temple stands in the home town of Joseph Smith and commemorates the founding of the Mormon faith.    It was here in Palmyra that Smith received his famous First Vision in a secluded grove, and it was here that an angel named Moroni directed him to discover the golden plates and seer stones that allowed him to write what is now known as the Book of Mormon.

Smith left Palmyra in 1827, and it wasn’t until nearly two centuries later that the town became home to its first temple in 2000.  It is among the most beautiful of the various Mormon shrines, with white marble walls and crowned with a golden statue of the angel Moroni.  The temple stands on the grounds of the old Smith family farm, and it is close to the fabled Sacred Grove where Smith had his vision (the grove is open to the public).

The Kirtland Temple is the oldest Mormon Temple in America, and the only one to survive that was personally attended by Joseph Smith.  In 1831, Smith led the first Mormons from Palmyra in New York to Kirtland, where they established a community on what was then the American frontier.  They remained here throughout the 1830s, when a schism and financial difficulties drove many members of the community to relocated once again to Illinois.

Built in the Federal style, the Mormon Temple of Kirtland is one of the only such temples not built in the style of the Great Temple in Salt Lake City.  There are a few other original Mormon-era structures in the town, including the cemetery, where some of the earliest members of the Church of Latter Day Saints are buried.  A museum on site offers exhibits on the history of the early Mormon community of Kirtland.

The Nauvoo Temple commemorates the most important Mormon community that existed prior to that of Salt Lake City.  In 1839, after leaving their home in Kirtland, members of the Church of Latter Day Saints relocated to Nauvoo, where they remained until the mid-1840s.  This community was larger and more prosperous than its predecessor, ultimately arousing the suspicions of other residents of the area.  In 1844, Smith was arrested her and then taken to the nearby Carthage jail where he was later killed by a mob.

A year later most of the Mormons packed up and relocated to the distant Utah territory where they believed they would be free from persecution.  They left behind homes, businesses and buildings which are now preserved as a historic district.  Although the town’s original temple was destroyed years ago, a new building was completed here in 2002.  Another highlight of the district is the large home where Smith lived while serving as Nauvoo’s prophet.

The Bountiful Tabernacle (not to be confused with the Bountiful Utah Temple) was the original place of worship of the Mormon community of Salt Lake City.  The Mormons, led to Salt Lake City by Brigham Young in 1847, immediately began construction on a temple upon their arrival.  However, when it became apparent that the temple would take at least a generation to complete, they built the Bountiful Tabernacle as a temporary place of worship.

The Tabernacle was completed in 1863, and was the community center of worship for more than thirty years.  It remained an important historic site even after the completion of the Great Salt Lake Temple.  A century later, when the local Mormon community was so large that it outgrew the Salt Lake Temple, an additional temple was built in Bountiful on a hillside overlooking the original town.

The Salt Lake City Temple and the large surrounding complex is the world headquarters of the Church of Latter Day Saints.  This temple is a must see for Mormons, many of whom make at least one pilgrimage to Salt Lake City during their lifetimes.  Brigham Young laid the cornerstone of the temple shortly after arriving in the area in 1853, after which it took forty years to complete.  The building was dedicated in 1893.

The Mormon complex in the heart of Salt Lake is dominated by the immense temple, once among the tallest buildings in the American west.  This immense marble structure, crowned by a gold statue of the angel Moroni, has become the blueprint for almost every subsequent LDS temple.  While the temple is strictly off-limits to non-Mormons, the surrounding complex can be visited, including the Mormon Tabernacle (an immense meeting hall that is home to the world famous Mormon Tabernacle Choir).