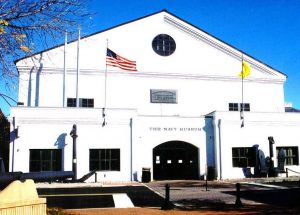 In the United States, you can find museums for virtually anything related to the country’s history, especially its military history. As America approaches its 250th birthday, that means a lot of museums.  There are museums documenting everything from battles and wars America has fought to the leaders and heroes who have fought in them.  But it is only relatively recently that national museums dedicated to the five branches of the armed forces have been established by the United States government (two of them are still under construction).  So, in honor of those who have served, here is a quick intro to America’s national military museums:

The National Museum of the United States Navy is one of the oldest military museums in the United States, with a collection that can be traced back to the early 19th century.  Officially founded in 1961, the museum was preceded by similar institutions dating back to the American Civil War.  The museum and its growing collection was moved to a permanent home in the Washington Navy Yard in the 1960s and now serves as the flagship of American naval museums around the country.

The collection of the museum began with a French naval cannon captured around the year 1800.  A formal effort to store and display naval artifacts began at the end of the Civil War, when space was set aside at the Washington Naval Yard in the capital.  It was moved several times due to space needs, ultimately ending up the old naval gun factory.

Among the museum’s immense collection, which documents the entire history of the United States Navy, are exhibits and artifacts from the American Revolution, the Civil War, both World Wars and every military action in between.  There are special exhibits on the sinking of the USS Maine, the Byrd expedition to the South Pole and the history of America’s submarine force.  The National Museum of the United States Navy is considered to be the most comprehensive such museum in America.

The National Museum of the United States Air Force is the oldest and largest military aviation museum in the world.  Located at Wright-Patterson Air Force Base, one of America’s most important military installations, it precedes the Smithsonian Air and Space Museum in Washington by several decades.   Built around a private collection that started a few years after the end of the First World War, the museum has been collecting aircraft and related artifacts throughout almost the entire history of military aviation.

Wright-Patterson Air Force Base is one of America’s oldest and largest air military facilities.  Established in 1917 as Wilbur Wright Field in 1917, it is associated with the Huffman Prairie Flying Field where the Wright Brothers tested some of their early airplanes.  The original museum collection began in 1923 with a few pieces assembled by some of the base’s engineers.  It moved to its current location in the 1950s, and subsequently expanded to four hangars.  It was designated the National Museum of the United States Air Force in 2004.

The museum is home to over three hundred airplanes and thousands of other objects stretching from the Wright Brothers to the modern era.  Virtually every class of military aircraft is represented, including many from foreign countries.  Just a few of the highlights include a biplane used by the Lafayette Escadrille, the first American air unit ever to see combat in World War I; the Bockscar, which dropped the atomic bomb over Nagasaki, Japan; the Memphis Belle; and the presidential plane on which Lyndon B. Johnson was sworn into office after the Kennedy assassination.

National Museum of the Marine Corps

The National Museum of the Marine Corps is one of the only museums in the United States specifically dedicated to the Marines (compared to the other branches of the services, which are more widely represented).  Completed in 2006, the museum traces the history of the United States Marine Corps, with a focus on their activities in the 20th century.

The Marines have been around in one form or another since the late 18th century.  Playing a role in almost every American war since the Revolution, they became a major force during the Spanish American War and are among the most storied participants of every war thereafter.  In 2006, the National Museum of the Marine Corps opened, replacing two smaller earlier museums at Quantico and the Washington Navy yard.

The Marine Corps Museum is already home to over half a dozen major exhibits, with several others on the way.  Some of the galleries focus on the life of Marines, while others trace their service record through America’s wars.  As of the time of this writing, new exhibits were being planned related to the Marine Corps in the present day.

The National Museum of the United States Army is a planned museum currently under construction at Fort Belvoir in Virginia.  Sponsored by the United States Army, the Army Historical Foundation and other organizations, it will be one of the largest military museums in the world when completed.  The museum is expected to be opened sometime in late 2019.

As of the time of this writing, the National Museum of the United States Army is anticipated to have a collection between forty and fifty thousand pieces, including weaponry, military artifacts, documents and other items.  According to their website, a substantial number of the items on display will be rare or unique, including many which will be seen for the first time here.

As of the time of this writing, the National Coast Guard Museum is anticipated to occupy an 80,000 square foot facility with exhibits ranging from national defense to environmental stewardship.  In addition, a concert pavilion is planned as a venue for performances by the United States Coast Guard Band.