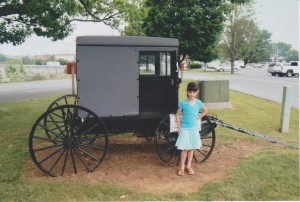 America has had a long tradition of idealistic religious groups attempting to establish Christian utopian communities, a tradition which goes back to the Puritans of 17th century Massachusetts.  Most such communities have ended in obscurity or even disaster, though a few have been successful.  In the end, virtually all of those that survived have generally been absorbed into mainstream American and Christian society, with one major exception.  The Anabaptists, better known as the Amish (and their neighbors the Mennonites and Quakers), have avoided both obscurity and success, stoically maintaining their traditions and cultural independence in the face of overwhelming American culture.  Their efforts have resulted in one of the world’s most successful and envied Christian utopian communities.

The history of the Anabaptist movement dates back to the early days of the Protestant Reformation.  Many early Anabaptists adopted a very strict lifestyle based on Biblical teaching, and were often considered fundamentalists by neighboring Lutherans and Calvinists.  The generally non-violent habits of the Anabaptists left their communities vulnerable to both Protestants and Catholics alike during the religious wars of the 17th century.  By the 18th century many Anabaptists decided enough was enough, and taking their cue from the Puritans, shipped out to the New World.  After arriving in America, most of the Anabaptist refugees settled in the hills of Pennsylvania, the state most renowned for its religious tolerance.

Although they came from Germany and were German-speaking, the Annabaptists have been mistakenly referred to as the Pennsylvania Dutch since they first arrived.  Their communities were established primarily in the Lancaster County area, and Lancaster has since been indelibly associated with them.  Very little has changed in Pennsylvania Dutch Country over the last two centuries.  Its lack of history is its history.  Lancaster’s brief moment in the national spotlight took place on September 27, 1777, when it served for one day as the national capital.  The residents of Lancaster have traditionally shied away from technology, personal comforts, politics, wars and anything else that distracts from their simple lifestyles.  This was true even during the American Revolution and American Civil War, despite the fact that both wars saw battles practically on Lancaster’s doorstep.

When most people think of the Pennsylvania Dutch, they generally think of the Amish, which are the most distinctive residents of Lancaster County.  But there are, in fact, several different groups living in the area.  The Amish live the traditional simple lives that the area is famous for, wear traditional garb, ride in horse-drawn carriages and use no modern technology.  The closely related Mennonites have lifestyles ranging from practices similar to the Amish to more-or-less modern day Americans.  The Religious Society of Friends, or Quakers, tends to be more active in the greater society.

Because of the traditions of its religious residents, Lancaster County not only remains a haven for Christian utopian living but is also a time capsule of German-American life in the 18th century.  Visitors and pilgrims from all over come to Pennsylvania Dutch Country not just to gawk and shop, but also to admire what may be one of the finest examples of sincere Christian lifestyles among any denomination anywhere in the world.

Pennsylvania Dutch Country is unique in that it does not feature a single site, monument or tomb that distinguishes it as a pilgrimage destination.  Lancaster County is the pilgrimage destination; the rolling hills, forests and farms of the region are the shrine; the simple and devout lifestyle is the venerated artifact.  A pilgrimage visit to the area consists of simply spending a day emerged in this mini-utopia.

The Mennonite Information Center is usually the first stop for most pilgrims to the area.  In addition to visitor information, the information center is also a Christian/Amish education facility.  The center’s chief attraction, if there is one, is the Tabernacle replica located next door.  The Tabernacle is a sixty-year-old, full-sized, faithful reproduction of the Biblical Tabernacle, the tent which housed the Ark of the Covenant during the Israelites’ journey to the Promised Land.  The highly-detailed display is true to the Biblical description, from the priestly robes to the Ark replica.

The primary stomping ground of the Pennsylvania Dutch is the hill country east of Lancaster, approximately fifty miles west of Philadelphia.  Because Amish Country is not a specific destination such as a church or cemetery, there is no official visitor information per say, although visiting after dark may be prohibitive due to lack of modern conveniences in some areas (eg-lights).  Web: http://www.padutchcountry.com/ (official website)

Lancaster County is a haven of Pennsylvania Dutch sites of interest.  Aside from the numerous markets which ply the local handicrafts, there are a number of important community locations.  Built in 1719, the Hans Herr House is the oldest Mennonite hall in the country.  At least two Amish Homesteads offer tours, one dating from 1805 and the other from 1744.  East of Harrisburg is the Mennonite Heritage Center in Harleysville.  One of the oldest Mennonite churches still in operation is the Germantown Mennonite Church, located in urban Philadelphia.