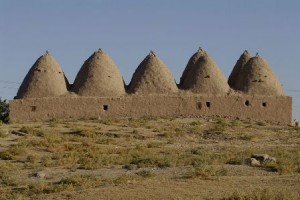 The city of Haran in what is now southern Turkey is one of the world’s oldest major international transit centers.  Located near the headwaters of the Euphrates River, virtually all overland traffic between Mesopotamia and the western regions of Canaan, Egypt and the Hittite Empire had to pass through Haran in ancient times.  In the Bible, Haran is best known as the city where Abraham and his family settled for a time on their way from Ur to Canaan, and where Abraham’s father Terah died.  Though the city continues to exist in the form of modern Harran, little remains of the ancient settlement of Abraham’s day.  Nevertheless, there are extensive pre-Roman ruins which give a glimpse of life here in Biblical times.

Many cities of the ancient world claim to be important centers of trade.  In fact, most cities of the ancient world were centers of trade by definition, some more important than others.  But few cities that were not sea ports rivaled Haran.  Located on the banks of the Balith River, a tributary of the Euphrates near its northern end, Haran lay directly on the main road between Carchemish, the southeastern-most major city of the Hittites, and Nineveh, capital of the Assyrians.  This stretch of highway later constituted the western end of the Silk Road to the Orient.

Haran was also along the main route from Mesopotamia via Aleppo to Canaan.  If the Fertile Crescent lands of Canaan and Mesopotamia formed an arch, Haran was the keystone at the top.  Almost all overland traffic between these two areas had to pass through Haran in order to stay close to fresh water.  Otherwise such travelers had to pass through the open desert, a time saving but infinitely more arduous journey.  The road from Ur to Haran was therefore very familiar in Abraham’s day.

According to the Bible, God told Abraham to leave Ur and travel westward towards Canaan.  The exact reason for this migration is uncertain, though it is likely that they were either fleeing from invading Elamites or simply looking for greener financial pastures.  It is uncertain as to why they stopped and settled for a time in Haran.  The only clue that the Bible gives is that Abraham’s father Terah died in Haran.  Terah was probably elderly or otherwise in a weakened state when they reached Haran, and could simply go no further.  Whatever the reason, Abraham stayed here for some years with his father, his wife Sarah, and his nephew Lot.  After Terah’s death and burial, Abraham and the others eventually continued on to Canaan.

While Haran played no further role in the Bible, it was still an important city in the history of ancient Israel.  Israelite travelers may have made pilgrimages to the Tomb of Terah.  When the Northern Tribes were taken captive by Assyria, they almost certainly passed through Haran on their way into exile in the east.  Haran also briefly served as capital of the Assyrian Empire before being conquered by Babylon, and it remained an important trading center up until the 13th century AD.  Around the year 1260, Haran was completely destroyed by the Mongols, putting an end to nearly three millennia of trade dominance in the region.

The modern day city of Harran pales in size and importance when compared to its Biblical predecessor.  That said, modern Harran has a fascinating and unique architectural style, with its famous beehive houses which evoke images of ancient days.  The city and its surrounding area is a trove of ruins.  There are remains of walls and buildings that date from many periods in the city’s history, including an ancient gate, part of an old Roman fortress and an Muslim-era Madrassa, or school.

Among the ruins of ancient Haran is a site identified by locals as the place where Terah, Abraham’s father, is buried.  Because of the immense passage of time involved, and the ravages that the city suffered at the hands of the Mongols and others, it is impossible to verify this claim.  However, this does not seem to diminish local enthusiasm for the tradition.

Harran is located close to the border with Syria approximately twenty miles south of Sanli Urfa and more than four-hundred miles southeast of Ankara.  It is in a very out-of-the-way area, and somewhat difficult to reach.  The places of interest, including the Tomb of Terah, are scattered about, and visitors are most easily directed by locals.  Web: www.goturkey.com (official tourism website of Turkey)

Before or during the days of Abraham, Haran was likely part of the Mari kingdom, a collection of united city-states in the northeastern corner of Mesopotamia that dominated the region’s early trade routes.  The Mari Archaeological Site is one of the largest, oldest and most excavated places in Mesopotamia, which is saying a lot.  Thousands of clay tablets unearthed at the site reveal surprising ties to early Biblical history, mentioning among other things the patriarchal lineage from Peleg to Terah as well as the city of Haran.  Some of these tablets are on display at the Louvre Museum in Paris.