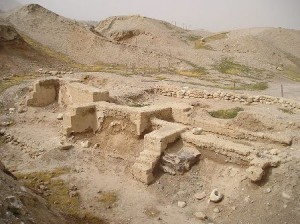 Jericho may be humanity’s oldest known true city, and its location made it a natural candidate for a prominent role in Biblical history.  Indeed, this great fortress-city was center stage for one of the Hebrew Bible’s most famous events.  Its destruction by the Israelites in the days of Joshua was nothing short of miraculous, and opened the way to the conquest of the entire land of Canaan.  While the area around Jericho has remained continuously inhabited since antiquity, it was only in the 19th century that remains of the ancient city and wall were rediscovered.  The archaeological sites of Jericho and Gilgal are now solidly under the control of the Palestinian Authority, and are actually among the easier Jewish sites to see in the West Bank.

The city of Jericho is ancient even by Biblical standards.  The earliest evidence of civilized habitation at the site is estimated to date back at least ten thousand years, and it is generally believed that the first settlement at Jericho was the world’s first true city, predating anything else yet discovered even in Mesopotamia or Egypt.  Archaeologists estimate that ancient Jericho had probably been rebuilt several times even before Abraham arrived in the area.

Sometime during the 2nd millennium BC, Jericho arose to become the most powerful of the Canaanite city-states.  It is possible that the Jericho’s population was swelled when the destruction of Sodom and Gomorrah sent refugees streaming northwards for safety.  Furthermore, Egyptian and Hittite military campaigns along the Mediterranean coast encouraged the Canaanites to fortify strong cities at inland locations.  The fabled walls and fortifications of Jericho probably date from around this time.  By the time the Israelites arrived, Jericho was apparently an intimidating fortress.

Jericho came to the forefront of world and Biblical history with the arrival of the Israelites after forty years of wandering in the wilderness.  This great walled city near the Jordan River guarded the eastern approaches into the Promised Land and was the Israelites first strategic objective.  Under the leadership of Joshua, warriors from the Twelve Tribes surrounded the city, and a weeklong siege ensued.  The Israelites rallied behind the priests, who had erected the Tabernacle on the nearby hill of Gilgal.  On the seventh day of the battle, Jericho’s wall was breached and thrown down.  The city was subsequently destroyed and its inhabitants slain almost to a man.  The fall of Canaan’s greatest city sent shockwaves throughout the region.

For a while afterwards, an Israelite military base was maintained near Jericho’s ruins, but the city was not rebuilt, and by the days of the kings, Jericho was reduced to a small settlement.  The area made a brief reappearance in the Bible when Saul was coronated at Gilgal.  Then for the next three thousand years or so, Jericho remained on the fringe of history, until the beginning of the 20th century when Jewish immigrants began returning to the Holy Land.  At that time, the local Muslim population began to strengthen its hold on the areas east of Jerusalem, and the small settlements around Jericho soon grew into a sizeable city.  By 1948 it had become a key Palestinian stronghold and was the first Palestinian city to be granted autonomy in the 1990’s.

Ancient Jericho was likely located on what is now Tel Jericho, a hill on the outskirts of the modern city of Jericho.  Most of that hill now consists of a collection of archaeological digsites.  Almost nothing remains of the settlement of Joshua’s time.  Ruins of the ancient city walls, what most visitors are interested in, are scattered around the area.  Trenches reveal the multitude of layers representing the various civilizations that once stood on this spot.

Tel Jericho is also home to the ruins of ancient Gilgal, just to the northeast.  It was here that Joshua first set-up the Tabernacle, making Gilgal Israel’s first religious headquarters.  Near the edge of the ruins of ancient Jericho is the Spring of Elisha, thought to have been used by that famous prophet.  The strategic value of Jericho was never wholly forgotten, and ruins of a Jewish fortress from the Maccabean period and a regional palace from the days of the Ummayid dynasty can also be found in the area.

The ruins of ancient Jericho are located approximately twenty miles northeast of Jerusalem, just north of the main road between Israel and Jordan.  The ruins are enclosed in an archaeological site and require admission.  The site is open in the summer from 8:00am-6:00pm, and in winter from 8:00am-4:00pm (exact months not available).  Admission is NIS12.  Web: www.jericho-city.ps (official website)

The region east of Jericho was the primary staging point for the Israelite invasion of Canaan.  Besides Gilgal where the Tabernacle was established, Joshua’s Marker Stones still identify the location where the Israelites crossed the Jordan River.  Also in Jericho can be found the Herodian Synagogue, one of the oldest still in existence.