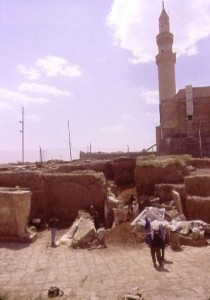 Ruins of the Tomb of Jonah (wikipedia.com)

Ancient Nineveh was the capital city of Assyria, the world’s first truly massive empire.  At its height, the Assyrian Empire stretched from Persia in the east to Egypt in the west.  It is not surprising that Nineveh played a significant role in the history of the ancient Israelites.  The most significant interaction came when the Assyrians conquered the Northern Kingdom in the latter half of the 8th century BC.  However, the most famous Biblical association with Nineveh is the story of Jonah, chronologically the earliest of Israel’s minor prophets.  The story is unique in that it not only chronicles the first journey of a major Biblical figure by water, but also the first journey of a major Biblical figure back to Mesopotamia since the days of Abraham.

According to the book of Genesis, the city of Nineveh was founded by the great hunter Nimrod.  There are archaeological traces of Nineveh old enough to match up with the era of Nimrod in the Biblical timeline.  Because of its association with Nimrod, Nineveh was a possible alternative site for the Tower of Babel, as opposed to the city of Babylon further south.  One of the northernmost ancient settlements along the Tigris River, Nineveh was an important trading center from earliest times.  It entered the historical stage in the 14th century BC when it was conquered and absorbed by the neighboring kingdom of Assur, home of the Assyrians.

Sometime around the 10th or 9th centuries BC, the growing Assyrian Empire moved its capital to Nineveh.  This was the beginning of the city’s architectural heyday.  Great walls with fifteen immense gates were constructed, and the city was adorned with dozens of magnificent temples dedicated to the pantheonic gods of Mesopotamia.  The royal palace was immense, probably bigger than any other royal residence in the world up until that point.  As the city grew in size and wealth, so too did its reputation for sin and vice.

No doubt this reputation reached the ears of the people of Israel.  More importantly to the Israelites were the rumors of the wars of expansion that the Assyrians were waging during the 8th century BC.  It is probable that the people of the Northern Kingdom had a fair idea of what was coming decades before the Assyrian army arrived on their borders.  Therefore a messenger was sent to give warning to the people of Nineveh.  Jonah, the chronologically earliest of the Minor Prophets, was chosen to fulfill the task.  After a brief but famous detour via a great fish, he eventually made the journey.  The ensuing events are among the most enigmatic in the Bible.

Jonah arrived in Nineveh and gave his warning, and the people there actually listened to him.  Despite this, Jonah was anxious to see the wrath of God unleashed upon the sinful city, and was disappointed when the wrath failed to materialize.  Some modern scholars conjecture that Jonah might have also had another motive, and that was to spy on the city to use his powers of persuasion to forestall an attack.  It is even possible that his visit to Nineveh angered the Assyrians, encouraging them to invade Israel for their insolence.  Either way, the repentence of Nineveh did not stop them from annihilating the Northern Kingdom soon afterward.  However, Nineveh succumbed to an even greater enemy barely a century later, after which it played no further roll in Biblical history.

The ruins of Nineveh outside of modern-day Mosul are extensive.  They have been thoroughly investigated over the last two centuries, and much of the area has been exposed.  The rough outlines of the city wall, over eight miles in length, are now discernible, as are many of the city’s towers and gates.  Within the walls, an endless variety of remains of temples, residences and other buildings have been excavated.  Unlike many other similar archaeological sites, a serious effort has been made to actually reconstruct some of Nineveh’s more prominent buildings, the most famous being the reconstruction is the Mashki Gate near the city’s northwestern corner.  Work has been done on several others of the city’s landmarks as well.

The Tomb of Jonah is located closer to the center of Mosul inside a sprawling mosque.  The mosque and its needle-thin minaret crown a low hill and absolutely dominate the local city skyline.  The tomb itself is a magnificent wood and brass reliquary that dates from a much later period.  The sarcophagas can be glimpsed through the metal grillwork.

The city of Mosul, two hundred miles north of Baghdad is the largest city in Northern Iraq.  Due to ongoing problems in the region, notably difficulties between the local Sunni Arab and Kurdish populations, visiting the holy sites of Mosul is dangerous if not outright impossible at the present time.  The archaeological remains of Nineveh just outside of Mosul are an open site.  No other visitor information was available for either Nineveh or the Tomb of Jonah as of this writing.  Web: www.tourismkurdistan.com (official tourism website of the Kurdistan region of Iraq)

There are several locations throughout the Middle East which lay claim to the site of the Tomb of Jonah.  In addition to Mosul, the city of Sarafand in Lebanon is a favorite contender, boasting a Tomb of Jonah which is recognized by a number of Jewish and Christian scholars.