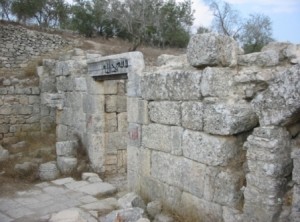 Samaria was an oddity among the ancient cities of Israel.  Unlike the countless other villages and small cities in its immediate vicinity, it never boasted a significant Israelite population, or even a noteworthy Canaanite population, prior to the division of the kingdom.  And yet in the period following the separation of Israel from Judea, Samaria soared from virtual anonymity to the heights of a major capital city in just a few years.  At its peak, Samaria boasted a royal palace and a Great Temple built to rival those in Jerusalem, though the archaeological verdict is out as to whether either of these buildings measured up.  The site of Samaria remains sacred to this day to the Samaritans, the last surviving remnants of the Northern Kingdom of Israel.

The united kingdom of Israel, established by the Prophet Samuel, lasted for barely more than a century.  Soon after its fifth king was coronated, all but two of the tribes and some of the Levitical cities in the south had seceded.  The main cause of the split was a resurgence of the old rivalry between the dominant tribes of Judah and Ephraim.  The latter, having lost its ancient predominance and glory to the former, grew tired of seeing the descendents of Judah on the throne in Jerusalem.  When Rehoboam, the son and heir of King Solomon, extended his father’s crushing burden of taxes, the northern tribes rebelled.  Selecting Jeroboam of Ephraim as their king, they kept the mantle of Kingdom of Israel for themselves.

Although Jerusalem and Hebron lay firmly within the territory of Judah, Israel maintained their hold on the holy cities of Shiloh, Gilgal and Shechem.  It was in the latter that the leaders of the northern tribes held the fateful meeting in which they decided to secede and where Jeroboam was selected as their first king.  Shechem also served as Israel’s first capital city.  However war broke out almost immediately, and throughout the 10th century BC, Israel found itself surrounded by enemies.  Shechem became increasingly exposed to the encroachments of Judah, and the capital was moved further north to Tirzah.

By the time of Omri, the sixth king of the northern kingdom, it was decided that yet another new capital in an even more secure location was needed.  A new site was chosen, and Omri founded the city of Samaria.  Samaria became a thriving city, with strong fortifications, palaces, and even its own great temple, the validity of which was based on the supposed presence of the Tabernacle, while the Ark was in Solomon’s Temple in Jerusalem.  Samaria remained the capital of the Northern Kingdom for the next century and a half, during which it was assaulted by enemies many times.  It finally succumbed around 721 BC when it was captured and sacked by Sargon II of Assyria.

The ruins of the ancient city of Samaria are located just outside of Sebastia, a suburb of Nablus and geographically close to the biblical cities of Shechem and Shiloh.  The city was sacked on numerous occasions in ancient times, and little remains of the original settlement of King Omri’s time.  That said, the ruins are extensive and scenic, and boast a number of sites which date back to the Israelite period.

The greatest surviving ruins from Samaria’s heydey are the remnants of the city’s walls and fortifications.  Some of these remains date back as far as the 9th century BC, and were probably erected under the direction of King Omri (though other sections have been dated from the later Seleucid and Roman periods).

The town of Sebastia is located approximately ten miles northwest of Nablus.  They ruins of ancient Samaria are open daily (except Fridays) from 8:00am-4:00pm.  The cost of admission is NIS13.  Web: www.visitpalestine.os (official tourism website of Palestine)

In addition to Samaria, the Ruins of Tirzah  are also located in the northern outskirts of Nablus.  The seven hundred or so surviving descendents of the Samaritans now live in a small community outside of Nablus near Mount Gezrin.  The Samaritan Synagogue of Nablus, the oldest in the world, has been empty and unused since the early 1990s.