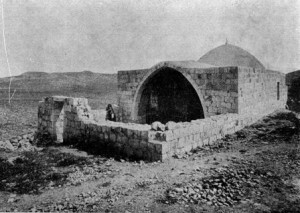 The Biblical city of Shechem, the modern-day city of Nablus, is one of the Holy Land’s oldest cities.  It played a major role during several periods of ancient Israeli history, and is home to a number of lesser but very popular Biblical pilgrimage sites, the most important being the Tomb of Joseph.  The other major site is Mount Gezrin, believed by both Jews and Samaritans to be the location where Abraham almost sacrificed his son.  Both sites are very ancient.  The Tomb of Joseph itself is a relatively recent structure, though his grave is much older.   Unfortunately this venerable and extremely sacred Jewish site has been vandalized several times in recent years.  However, it was recently recognized as a Muslim holy site and is now protected by the Palestinian Authority.  Hopefully this will discourage any further violence or desecration of the site.

The area around Mount Gezrin was a thriving commercial center long before Shechem became a major Israelite settlement.  Abraham and his family passed through the area sometime around the 19th century BC, and it is here that Jews believe he offered up his son as a sacrifice to God.  Fortunately, God intervened and settled for a lamb instead.  In later years, even after Abraham relocated to Beersheba in the south, Shechem remained a busy place for the patriarchs.  His grandson Jacob resettled here with his own family, and the rape of Jacob’s daughter Dinah by local Canaanites drove his sons Simeon and Levi to lay waste to Shechem and kill its inhabitants.

After Jacob and his family left Shechem to live with his son Joseph in Egypt, Shechem fell out of Biblical history for almost five centuries.  Joshua’s army retook the city during his conquest of Canaan, at which time he planted the Oak of the Pillar here in commemoration of the victory.  This may have been on or near the same spot as the Oak of Moreh, where Abraham erected his altar.  After Joshua’s conquest, Shechem was allocated to the territory of the tribe of Ephraim.  As a border city between the lands of the two half-tribes of Ephraim and Manasseh, Shechem was the logical choice for the burial place of Joseph, whose body had been brought back from Egypt.

During the days of the judges and early kings, Shechem was one of Israel’s most important religious and political centers.  Shechem reached its apex shortly after the death of Solomon, when the ten northern tribes declared their independence from the central government in Jerusalem, removing themselves from the perceived domination of the southern tribe of Judah.  The first king, Jeroboam, was coronated in Shechem, and the city briefly served as the new nation’s capital.  It remained in the possession of the Northern Kingdom until its conquest by Assyria.

After the Jews returned from the Babylonian Captivity, Shechem was relegated to virtual insignificance.  Although it continued to be venerated by the surviving Samaritans, former citizens of the Northern Kingdom, it played no further significant role in subsequent Jewish history.  By the time of the Muslim conquest, little effort was made to reestablish or maintain a significant Jewish community here, other than a few die-hard Samaritans.  Today the city of Nablus stands on the site of ancient Shechem, a solid Palestinian bastion in the West Bank.  Because of this access to the Tomb of Joseph is strictly controlled and requires special permission to visit.

The Tomb of Joseph is located on a hill just outside of the city of Nablus.  The site consists of a small complex of buildings, mostly of Muslim origin.  During the occupation of the West Bank, the Tomb’s interior was extensively renovated by the Israeli authorities.  Sadly, the site has been repeatedly vandalized over the last few years.  While most of the damage has since been repaired and the tomb’s interior restored, most of the artifacts that were within were removed or destroyed.  Fortunately the body of Joseph remained undisturbed.  According to some traditions, his sons Ephraim and Manessah are buried with him as well.

Mount Gezrim is the westernmost of two large hills, along with Mount Ebal to the east, that flank the city of Nablus.  It is here that Jews believe Abraham erected his altar by the Oak of Moreh, though a possible alternate site for the oak has been identified just south of Nablus.  Mount Gezrin is highly revered by the area’s few remaining Samaritans, who ritually slaughter a lamb on the mountain every year at Passover in commemoration of the ancient event.  The Oak of the Pillar, erected by Joshua after his invasion of Canaan, is believed to stand on the mountain at the same spot as Abraham’s altar, though the various trees and pillars may in fact have been located on two or more different spots.

The city of Nablus is deep inside the Palestinian Territory approximately forty miles north of Jerusalem and sixty miles south of Tiberias.  Because of this its holy sites have been a major flash point throughout much of the Israeli-Palestinian conflict.  However, most of the city can be visited, including Mount Gezrim, which is an open site.  Visiting the Tomb of Joseph is difficult, and at times even dangerous, and access to the site is extremely restricted.  However, some Jewish groups have been permitted to visit as recently as September 2008.  A special permit is required to enter the tomb.  As of this writing no other visitor information was available.  Web: www.travelpalestine.ps (official tourism website of Nablus)

In addition to its Abrahamic sites, locals maintain the tradition that Mount Gezrim contains the secret Burial Site of the Original Ten Commandments.  This conflicts, of course, with the belief that the remains of the original tablets are contained within the Ark of the Covenant, wherever that may be.  The ones supposedly buried on the mountain may, however, be the second set that was carved out.  Another site of interest there is the Well of Jacob, located within a Greek Orthodox church, which may have been used by the Patriarch and his family during their time in Shechem.