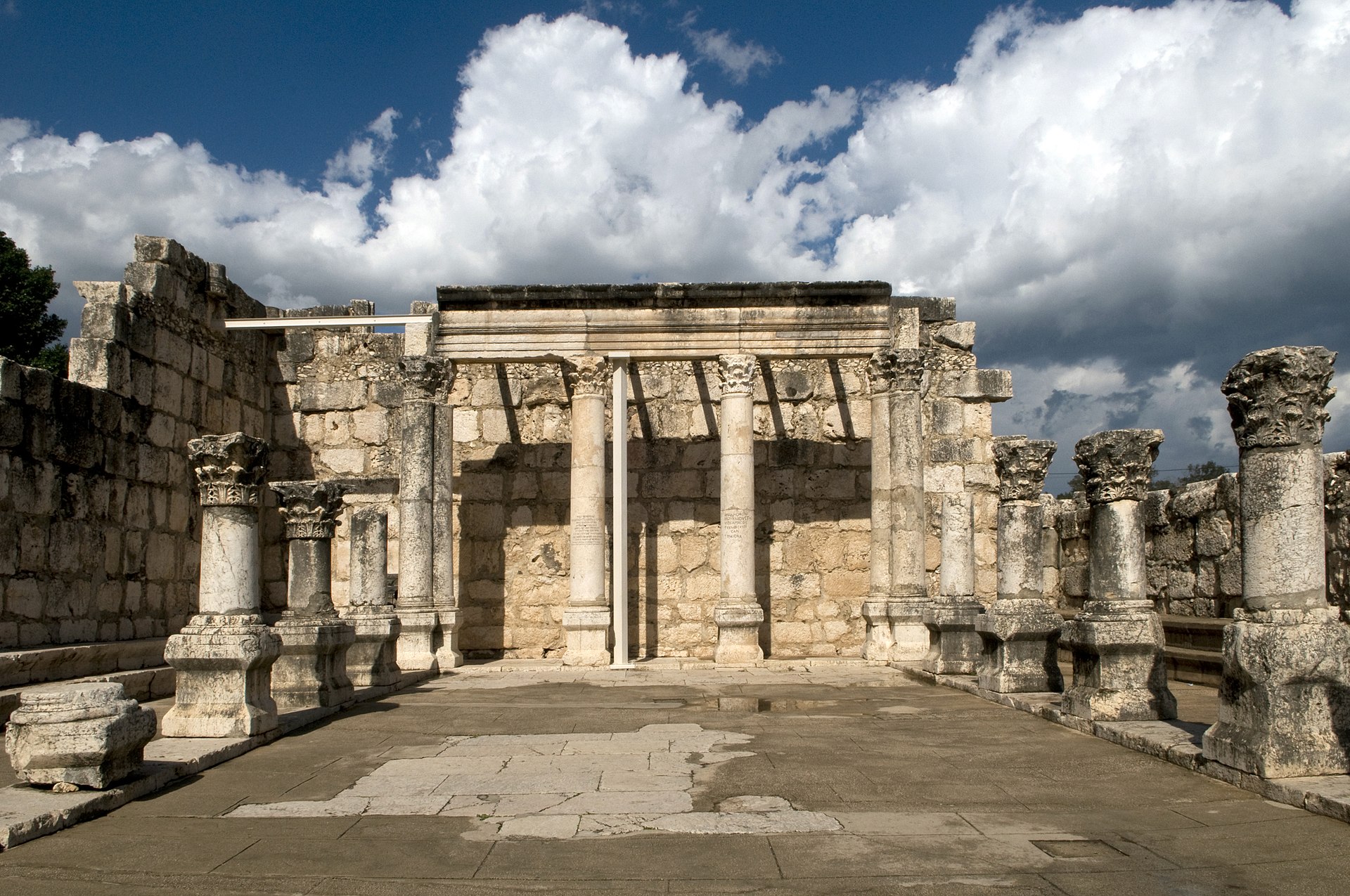 The ‘synagogue’ as an institution is very ancient.  It is unknown exactly when the earliest synagogues were built, but in all likelihood it was during the Hasmonean dynasty, which ruled over Judea from 140 BCE to 37 BCE.  Synagogue construction became more widespread after the destruction of the Great Temple of Jerusalem in 70 CE.  Despite this, not a single synagogue dating from the Roman era has survived.  However, ruins of synagogues from antiquity have been discovered all over the Mediterranean region, from Israel to Italy.  Following are some of the best archaeological sites where the ruins of ancient synagogues may be found.

The Synagogue of Dura Europas is what’s left of one of the oldest known synagogues in the Middle East outside of Israel.  Dating from the mid-3rd century CE, it is not quite as old as some of the ruins to be found in the Holy Land.  However these ruins stand out because of the artwork that has survived, or at least did until ISIS occupied the region a few years ago.

Dura Europas was a frontier town of the Parthian, Roman and Sassanian empires from the 3rd century BCE to the 3rd century CE.  Originally built by the Parthians, it served as a trading outpost between Persia and Mesopotamia for the better part of five hundred years.  Religious life in Dura Europas appears to have been tolerant, as both a Jewish synagogue and a Christian house church were allowed to be built here in the mid-3rd century.  The city was overrun by the Sassanids in 256 CE, at which time the synagogue was partially destroyed and abandoned.

The Synagogue of Dura Europas archaeological site was, at least up until the Syrian civil war, surprisingly well preserved.  This was due to two reasons: first, its walls were part of the city defensive system, and strengthened prior to the Sassanid attack.  Second, the city was abandoned and never rebuilt.  What survived of the synagogue was left undisturbed for over seventeen hundred years.  Because of this the synagogue has what is arguably some of the best surviving examples of Jewish artwork and mosaics from the Roman era.  NOTE – Dura Europas was overrun by the forces of ISIS during the Syrian civil war, and much of the site was looted and destroyed.  At the time of this writing the state of the synagogue was unknown.

The Sardis archaeological site is home to one of the best surviving synagogue ruins from antiquity.  Believed to have been completed in the 3rd century CE, there may have been an even earlier synagogue in Sardis as the Jewish community here is very ancient.  The synagogue is just one of several well preserved buildings and ruins in Sardis that have survived from the Roman era, and offers a glimpse into how the Jewish community was part of the greater Roman community two thousand years ago.

The Jewish community of Sardis is one of the oldest such settlements in Western Anatolia.  According to tradition, the first Jews to settle here probably arrived in the 3rd century BCE when the area was still ruled by the Seleucids.  Sardis was devastated by an earthquake in 17 CE, and it is possible that an earlier synagogue was badly damaged or destroyed at this time.  The site of the synagogue has been part of ongoing excavations in Sardis since the 1950s.

The ruins of the Sardis Synagogue are extensive, with the floor, courtyard, sections of walls and a number of the columns still intact.  The synagogue may have originally been constructed for other uses as it is part of a larger complex of public buildings.  Portions of the floor mosaics are still intact, and the site has a number of surviving inscriptions that date from the time that the building was in use as a synagogue.

The Delos Synagogue is part of an archaeological site on the island of Delos off the coast of Greece.  Delos is full of the remains of ancient structures, some of which date back to well before the Romans arrived.  The ruins identified as the Delos Synagogue are somewhat enigmatic.  Dated to the 2nd century BCE, the synagogue may not have been Jewish, but actually Samaritan.  Moreover, it might not have even been built as a synagogue.  Research into this is still ongoing.

A Jewish or possibly Samaritan community first appeared on the island of Delos around the 3rd century BCE, about the same time such communities were popping up all over the Greek world.  The community constructed this synagogue right around the time the Romans showed up in the area, and it likely remained in use for about three hundred years.  It stood until the late 2nd century CE and was rediscovered by archaeologists in 1912.  The synagogue is part of the Delos UNESCO World Heritage Site.

The ruins of the Delos Synagogue are possibly the oldest such ruins ever discovered in Europe.  The question is, was it actually a synagogue?  The mosaics depicting menorahs certainly suggest that it was.  However, as the building is located in the ruins of the old residential area, it may have simply been a meeting house or private home.  There is also the distinct possibility that the building was a synagogue used by Samaritans, which would be an extremely rare discovery.

The Stobi Archaeological Site is the ruin of an ancient town located in the heart of modern day North Macedonia.  Founded in pre-Roman times, this small city was for a time home to a Jewish community that left behind a curious legacy: stone ruins engraved with the nearly complete dedication of a synagogue dating from the 2nd century CE.  According to the inscription, the synagogue was constructed under the patronage of one Claudius Tiberius Polycharmos, who is referred to as the Father of the Synagogue.

The original synagogue at Stobi was replaced by a new synagogue about two centuries later.  This was followed by a Christian church in the 5th century.  The city and the church were largely destroyed by an earthquake in the 6th century.  The church and synagogue ruins were rediscovered by archaeologists in the mid-20th century.

The Stobi Archaeological Site has been extensively studied over the last half-century.  The area containing the synagogue is actually referred to as the Central Basilica, where ruins of the church and both earlier synagogues intermingle.  Portions of the floor of both early synagogues have been uncovered and are visible.  The columns bearing the Polycharmos inscriptions are now kept at the National Museum of Belgrade in Serbia.

The Ostia Synagogue is one of Italy’s oldest Jewish historic sites.  Located in the Ostia Archaeological Park, it is now part of a vast collection of ruins that was once the chief seaport of the Roman Empire.  The synagogue has been reliably dated to the 1st century CE.  This makes it one of the oldest known remains of a synagogue in Europe, and one of the oldest in the world outside of the Holy Land.

Ostia Antica was one of the great ports of the Mediterranean Sea during the Roman era.  As one of the most important trading centers of antiquity, Ostia Antica became home to an important Jewish community, probably as early as the 1st century BCE.  The history of the port’s synagogue is surprisingly well documented.  It was constructed during the reign of Claudius around 48 CE, though it is possible that the building was used as a private home before being converted to use as a synagogue a few decades later.  The building survived and probably remained in use until the entire city fell into decline.

The Ostia Synagogue is, along with the rest of the ancient city, largely a ruin.  Only portions of the foundations and lower walls have survived, along with a few broken stairs and columns.  Inscriptions on the wall indicate the the synagogue once house several Torah arks.  Part of one of the remaining columns is decorated with an engraving of a menorah.

The northeastern corner of modern Israel is home to some of the oldest synagogue ruins to be found anywhere.  This is especially true in the area along the northern shore of the Sea of Galilee, which was the heart of the Jewish community in the Holy Land after the Bar Kokhba revolt.  Dating from the Roman and Byzantine periods, some of the best of these synagogue ruins are to be found at Migdal, Capernaum and Nabratein.

The ruins of the ancient Synagogue of Magdala can be found in modern day Migdal.  Built sometime around the mid-1st century BCE it is uncertain exactly when the synagogue was destroyed.  Almost the entire foundation is intact, including some floor sections with surviving mosaics.  Also here is a replica of the Magdala Stone, which has a rare ancient depiction of the great Menorah of Jerusalem.

A little further north along the shore are the ruins of the Synagogue of Capernaum.  These date to the Byzantine era, but stand on the ruins of another synagogue completed in the 1st century.  The Nabratein Synagogue, built in the 6th century, is about ten miles north of the Sea of Galilee.  While smaller than the other ruins, it appears to have survived longer, and was still in use during the early Muslim era.