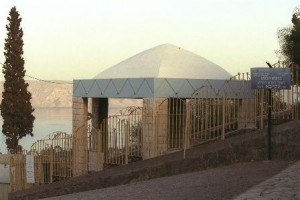 After the failure of the Jewish Revolts against Rome in the 1st and 2nd centuries AD, there was an eighteen hundred year gap in the history of the Jewish nation in the Holy Land.  Throughout that entire period, however, scattered Jewish communities continued to survive, especially in the Galilean north.  In the three centuries following the Bar Kochba Revolt, the remnants of the Sanhedrin, the Jewish high council composed of Israel’s priests, rabbis and scribes, regrouped in Tiberias and other northern cities.  Beginning with Akiva ben Joseph, many of Judaism’s greatest rabbis of the Diaspora lived, worked and died in the Galilean region, and it was here that the Talmud was born.  Because of its religious importance during the Diaspora, Tiberias is considered to be one of Israel’s holiest cities.

It is generally believed that after the destruction of the Temple in Jerusalem, the crushing of the various revolts and the Roman-imposed Diaspora that followed that the Holy Land became devoid of Jews in the 2nd century AD.  This is actually far from the case, and while Jews were indeed driven from Jerusalem and most other cities of the south, large communities continued to thrive in the north, especially around the Sea of Galilee.  The council of the Sanhedrin, now dominated by the Pharisee rabbis rather than the Sadducees, retreated to the north and began to assert its religious authority over Jewish life.

Under the leadership of men such as Akiva ben Joseph, Johanan ben Zakkai, Johanan bar Nappaha and others, the Sanhedrin re-established themselves in and around the cities of Beit Shearim, Yavne and Usha, where they struggled to keep Judaism intact.  Akiva ben Joseph was particularly important at this critical juncture, and he is credited as being one of the chief architects of rabbinical Judaism that would come to dominate Jewish life in the post-Temple era.  In addition to helping to keep religious life intact after the fall of Jerusalem, he was one of the major authors of the Mishnah, a central text of the Talmud.

After the Bar Khochba Revolt, the activities of the Sanhedrin and of Jews in general were outlawed for the next twelve years or so.  Later, when the Romans eased their restrictions, the surviving Jewish leaders established a more permanent home in Tiberias, the largest city in the Holy Land to survive the Jewish-Roman wars more or less unscathed.  Long considered unclean by Jews due to wide-scale desecration of graves there many years before, Tiberias was purified by Shimon bar Yohai, the preeminent rabbi of the 2nd century AD.  After this, many Jews, including the members of the Sanhedrin, removed there.  By the 3rd century, Judaism was again flourishing in the region, and Tiberias, along with nearby Zippori and Safed, had become the new cultural center of Judaism.

From Spain to Persia, most Jews continued to acknowledge the supreme religious authority of the Sanhedrin of Tiberias throughout the Roman period.  It was at this time that Jewish oral law and teachings were compiled, forming the basis of the Talmud.  Later, it was in Galilee that Judaism saw its last significant revival.  One of the greatest leaders of this period was Rabbi Yehuda Ha Nassi, and it was under his direction that the Jewish religious leaders and philosophers of the time completed the Mishnah.  However, in 351 AD, many of the surviving Jewish communities in Galilee were destroyed or scattered.  The Sanhedrin managed to exist for another sixty-four years until being banned outright in 415.  Afterwards, the Jewish presence in Israel fell to an all-time low, and international Jewish leadership, such as it was, relocated to the relative safety of the Persian Empire.  It would be more than a thousand years before another serious attempt was made to establish a Jewish homeland in Palestine.

Although Tiberias survived the Roman and Byzantine eras better than any other major city in Israel, it was destroyed on a number of occasions since.  While virtually nothing of architectural importance survives from the early Diaspora period, the city is chock-full of cemeteries, gravesites and tombs of interest.

The most prominent early rabbi buried here is Akiva ben Joseph, the erstwhile founding father of rabbinical Judaism.  His tomb is somewhat odd in appearance, consisting of both ancient and modern architectural elements.  It is located in a small courtyard of sorts partially enclosed by very old walls as well as newer walls and wrough-iron fencing.  The tomb itself is embedded in the wall, flanked by stones engraved with some of the rabbi’s writings.

The Tomb of Akiva ben Joseph is about a mile north of the city center of Tiberias, about eighty miles north of Jerusalem.  As of this writing no other visitor information was available.   Web: www.goisrael.com (official tourism website of Israel)

Tiberias and the surrounding area are home to a large number of tombs and other sites related to great rabbis of the Diaspora.  The greatest of these is the Tomb of Moses Maimonides, the greatest Jewish sage of the Middle Ages.  Also here are the Gravesites of Johannan ben Zakkai and Meir Baal ha Nes, two prominent early rabbis.  Nearby, in the city of Beit Shearim, is the Tomb of Rabbi Yehuda ha Nassi.  Among Tiberias’ more ancient places is the Tomb of the Matriarchs, questionable location of the burial sites of Bilhah and Zilpah, the handmaidens of Jacob’s wives; Jochebed, the mother of Moses; Zipporah, the wife of Moses; Elisheva, the wife of Aaron; and Abigail, one of the wives of David.