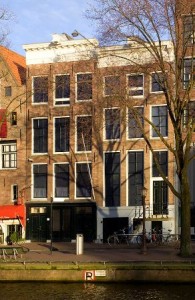 The somewhat misnamed Anne Frank House is actually a former office-warehouse building where the famous young Jewish girl lived in hiding with her family for two years.  She chronicled her experience in one of history’s most famous diaries.  Though there were many places throughout Nazi-occupied Europe where compassionate and courageous people helped to protect and rescue their Jewish neighbors from the terrors of Hitler’s regime, there is perhaps no other place as famous as the Anne Frank House in Amsterdam.  The site is now operated as a museum, dedicated to the memory of its inhabitants and the triumph of the human spirit as expressed in Anne Frank’s writings.

In the years following the great religious upheavals of the 16th and 17th centuries, the former Spanish colony of the Netherlands rejected state-sponsored catholocism in favor of a religiously tolerant society.  Many Jews began immigrating to the Netherlands around this time, fleeing the religious persecutions and inquisitions raging in other parts of Europe, especially Spain and Portugal.  There they established one of the most open and vibrant Jewish communities that had to date existed in Europe, a community that Adolf Hitler saw as a great affront to his plans in the 20th century.

In May 1940, German armies swept through the Netherlands on their way to France, humbling the Dutch forces in a whirlwind campaign that lasted less than a week.  On May 15, the government surrendered, leaving the Dutch people, and its large Jewish community, at the mercy of Hitler and the Nazis for the next five years.  The widescale persecution of Amsterdam’s Jews began almost immediately thereafter.

Seven years earlier, Otto Frank, a Jewish businessman, had relocated his family to Amsterdam from Frankfurt following Hitler’s rise to power in 1933.  He went with his wife and two daughters, including young Anne, and re-established himself as a merchant.  By 1942, Otto Frank had been forced to give up his business, and when his older daughter was ordered to report to a work camp, the family decided it was time to go into hiding.  With the help of trusted friends, they moved into the attic above his former warehouse, where they remained sequestered for two years.

Anne Frank, the younger daughter, had received a diary for her birthday shortly before going into hiding, and within its pages diligently recorded the goings-on of their lives.  The Frank family, and four other fugitives, survived in the small attic until August 4, 1944, when they were betrayed and discovered only a short time before Amsterdam was liberated by the Nazis.  Anne, along with her mother and sister, died soon afterwards in Nazi concentration camps.  Her diary, and the small attic over the warehouse where they lived, has been preserved as a testament to those who both succumbed to and survived the holocaust.

The Anne Frank House museum consists of both the warehouse building where Otto Frank’s business was located as well as the building next door.  Both properties date back to the mid-17th century and were built by Dirk van Delft as stately residences along the Prinsengracht canal.  Later each building was converted to business use.

The main museum, housed in the original warehouse building, has been partially preserved as it appeared in the early 1940s.  Offices and warehouse space are located on the lower floors, while the attic residence occupies the upper floors.  The attic rooms have largely been restored to appear as they did during Anne Frank’s time, though little remains of the original furnishings.  The lower floors have been completely converted into a museum which tells the story of the Frank family.  Many artifacts of their residency in the building are on display here and in the adjoining building, including Anne Frank’s diary.

The Anne Frank House is located near the heart of Amsterdam along the Prinsengracht canal, not too far from many of the city’s other attractions.  The museum is open March through September from 9:00am-9:00pm; and October through February from 9:00am-7:00pm.  The cost of admission is Eu7.50.  Web: www.annefrank.org (official website)

Amsterdam’s long history of religious tolerance allowed for a Jewish community that flourished as early as the 15th century, when many Jews fled north after being driven from Spain and Portugal during the Inquisition.  The Portuguese Jewish Synagogue dates from this period, and is still in use today.  Across the street is another former synagogue that now houses the Jewish History Museum.  The old Jewish Cultural Center in the Plancius building now houses the city’s Resistance Museum.  Beyond Amsterdam, in the city of Haarlem, is another famous Holocaust site: the Corrie Ten Boom House, where the famous Ten Boom family harboured hundreds of fugitives from the Nazis, including many Jews.