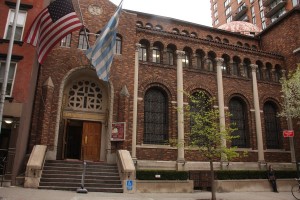 Like every major religious institution, the Greek Orthodox Church has an immense presence in New York City.  Most importantly, New York is home to the Archdiocesan Cathedral of the Holy Trinity, which serves as the national cathedral of the Orthodox church in the United States.  It is also distinguished as the largest Orthdox church in the Americas.  It is an archbishopric, one of the most important in the world outside of Greece.  Its historic congregation boasts many famous names, and is frequented by United Nations officials visiting from all over the world.

In the early days of the Orthodox church in America, most of the activity focused on the Pacific coast thanks to the Russian settlements there, and to a lesser extent in Florida.  However, by the latter half of the 19th century, Greek immigrants were pouring into the northeast, with many choosing to settle in and around New York City. 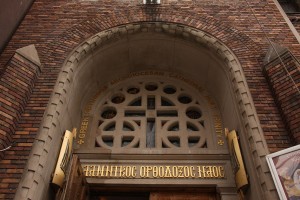 The first Greek Orthodox church was established in New York City in 1891, and in 1905 the patriarchate was relocated from San Francisco to Manhattan.  The archdiocese of New York quickly became the most important in North America, and a massive new cathedral was planned for the city.

The cathedral was famous even before its construction, with first lady Eleanor Roosevelt laying the cornerstone in 1931.  The cathedral was completed in 1933, and since then it has held the title of largest Eastern Orthodox Cathedral in the New World.  It was personally consecrated by the Patriarch of Constantinople. 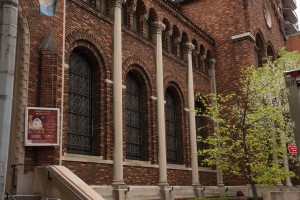 The Cathedral of the Holy Trinity was formally made the Archdiocesan church in 1962.  Over the years, its congregation has been a who’s who of the Greek Orthodox community in New York.  Its most famous recent member is Robert Stephanopoulos, father of George Stephanopoulos, who served as dean of the church for 25 years.

The Archdiocesan Cathedral of the Holy Trinity is a large complex that includes both the national church as well as the headquarters offices of the Orthodox Church in America.  One of the many spectacular buildings that went up in New York during the interwar years, the cathedral holds its own from an architectural standpoint, and is considered one of the most beautiful churches on the Upper East Side.

The cathedral is a red-brick blend of the early 20th century American and ancient Romanesque styles.  It boasts some of the most beautiful icons and mosaics of any Orthodox church building in the United States.

The Archdiocesan Cathedral is located on the Upper East Side of Manhattan in the heart of New York City.  It is open daily at 8:00am.  There is no cost of admission.  Web: www.thecathedralnyc.org (official website).

New York City and its environs is home to the largest collection of Greek Orthodox churches in the country.  Two of the best to visit are the Holy Virgin Protection Chapel, also in Manhattan, and the St. Sergius Chapel in Syosset on Long Island.  Just north of the city is St. Vladamir’s Orthodox Theological Seminary in Crestwood.