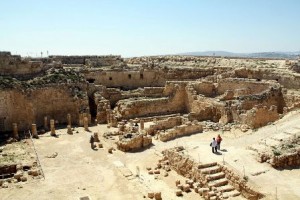 Herod the Great, the notorious villain of the Christian Nativity Story and generally vilified by Jews and Christians alike, was also one of the most energetic kings and prolific builders in the entire history of ancient Judea.  His architectural achievements surpassed even those of Solomon, and a surprising number of his projects have survived to the present day in one form or another.  Some of his greatest achievements, including the Western Wall in Jerusalem, the Fortress of Masada and the Tomb of the Patriarchs in Hebron, are covered in other sections.  However, there were many other projects, from his personal palaces to temples honoring his Roman allies to the massive port city of Caesarea Maritima which he literally built from scratch.  His legacy can still be found scattered throughout modern-day Israel.

Herod the Great is at once one of the most despised and enigmatic figures in the history of ancient Judea.  He is best known for ordering the Massacre of the Innocents as told in the Christian New Testament.  But beyond the notorious stories of his public and private life, he was by all accounts a gifted ruler, politician and diplomat.  Although King of Judea, Herod was technically not Jewish, but rather Idumean, a descendent of Jacob’s brother Esau.  Furthermore, he was well known for his friendship with various Roman emperors and his cooperation with the imperial authorities.  These facts made him doubly despised by the general Jewish population.  Nevertheless, Judea became one of the most prosperous and thriving provinces of the Roman Empire during his reign.

Herod served as the governor of Judea for several turbulent years before being elected King of Judea by the Roman senate around 40 BC.  He immediately began to consolidate his power by instituting a major public works program that would turn Judea into a state-of-the-art Roman province.  New construction began all over the region.  At the same time, he began work on his palace at Masada, an isolated site probably being chosen because of its proximity to his ancestral homeland of Idumea.  Later palaces followed in Caesarea, Jerusalem, Herodium, Jericho and around the Sea of Galilee.

Herod realized that the commercial success of Judea rested on its ability to compete in sea-trade.  To this end he embarked on his single largest project, the construction of a new ultra-modern port city along the Mediterranean coast.  This new city, Caesarea Maritima, was literally built from nothing in the space of a dozen years, and later became the defacto capital of Judea under the Romans.  The harbor of Caesarea Maritima was soon the busiest in the Eastern Mediterranean between Antioch and Alexandria.

Herod also sought to salve his strained relations with his Jewish subjects through the restoration and building of new religious structures.  Among these was the construction of a substantial new shrine at the Cave of Machpelah in Hebron. But his most famous work was his rebuilding of the Temple Mount in Jerusalem.  Under his direction, the Second Temple was immensely expanded with enormous retaining walls.  His work on Jerusalem also included the construction of massive new fortifications including the Antonia Fortress, palaces, and public facilities.  By the time of his death, Judea had been transformed from a provincial backwater region to a modern Roman state.

Besides the major shrines in Jerusalem, Hebron and Masada, Herod’s two most important and popular sites are the remains of Caesarea Maritima and the ruins of the Palace at Herodium.  The area of Caesarea Maritima was acquired by the Rothschild family in the early 20th century, both for development and for the preservation of the city’s ruins.  Most of the Herodian ruins, as well as ruins from various other periods, have been incorporated into the Caesarea National Park.  Among the highlights are a Roman-style theater and hippodrome, both of which date from the Herodian period.  Many of the ruin’s most interesting sites are now underwater and can be toured with the proper equipment.

The Palace at Herodium is located a few miles to the southeast of Bethlehem.  While not quite as large and dramatic as the palace at Masada, it was apparently much more enjoyable to Herod in his later years.  The original fortress on the top of the hill was later expanded to cover the lower slopes and surrounding area.  A good deal of Herodium has been excavated in recent years, revealing much of the ancient structure.  Among the recent discoveries is what is believed to be the site of Herod’s Tomb.  All of these ruins are located within Israel’s Herodion National Park.

The ruins of Caesarea Maritima are located on the Mediterranean coast, approximately fifty miles north of Tel Aviv and thirty miles south of Haifa.  Both sites are run by the Israeli parks department and are open April through September from 8:00am-5:00pm; and October through March from 8:00am-4:00pm.  The cost of admission for both locations is NIS23 for adults, NIS12 for children.  Web: www.parks.org.il (official website of the Israeli National Park Service)