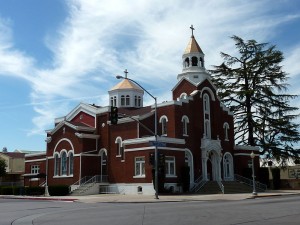 The Armenian Orthodox Church, one of the ancient Middle Eastern Churches not in communion with either the Eastern Orthodox or Roman Catholic churches, was largely founded by refugees fleeing brutal persecution in Asia.  Those who arrived in Southern and Central California discovered a new land reminiscent of their homes and established one of the most vibrant ethnic Christian communities in and around Fresno.  Fresno has since become the heart of the Armenian Orthodox diaspora, and is the largest community of such Christians outside of the Middle East.  The Armenian Church has left its stamp on Fresno, both culturally and architecturally.

The Armenian Orthodox Church claims to be the oldest on Earth.  Founded in the first century by the apostles, it was the first Christian church to be legally reconigzed by a state.  Throughout many centuries the Armenian Church remained independent of all other churches, especially after the area was conquered by a series of Islamic powers starting in the Middle Ages.  Under the Ottomans, the Armenians suffered ever increasing persecutions and ultimately massacres. 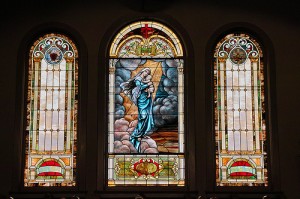 The first Armenian Christians settled in America as far back as the 17th century.  However, the first true waves of immigration did not begin until the early 1800s.  With the help of American missionaries, Armenian Protestant converts began arriving in the cities of the northeast in the years leading up to the American Civil War.

In 1881, two Armenian brothers arrived in Fresno and established the first true Armenian community on the west coast.  This community grew rapidly, particularly in the 1890s due in large part to the Hamidian Massacres back in the Ottoman Empire.  Although some of these were Protestant converts, most were true Armenian Orthodox.  By the late 1920s Fresno became the largest city of the Armenian diaspora, and much of the regional farms were owned by community members.  In 1914 the community established the Holy Trinity Church, the first Armenian Orthodox church in the United States. 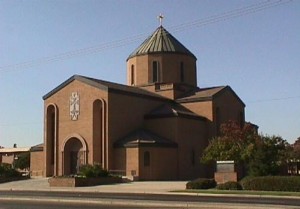 During the Great Depression and World War II, a newer, larger Armenian community formed in nearby Los Angeles.  Although this eventually grew larger than the Fresno community, Fresno continued to be the cultural and religious heart of the Armenian Church in America.  In the 1970s, a much larger church, the Saint Paul Armenian Church, was built to serve the still sizeable community.  Together the Holy Trinity Church and St. Paul Church are two of the most important Armenian Orthodox Churches in the country.

The Holy Trinity Church was the first church building constructed specifically for use by the Armenian Orthodox Community.  Blending traditional Caucasus and turn-of-the-century American styles, it is one of the best examples of Armenian church architecture outside of the Middle East.  Its dark red brick with white trim makes it an iconic architectural standout of the neighborhood.  The church interior blends heritages, from Orthodox-style iconic pictures to Persian rugs. 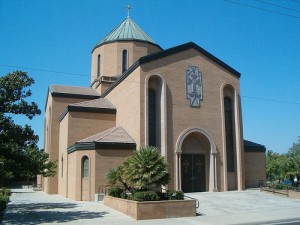 The newer St. Paul Armenian Church is the cathedral for the Fresno Armenian community and the seat of the local bishop.  It is much larger than Holy Trinity, and while that church is in the turn-of-the-century style, the more modern St. Paul’s is more reminiscent of Armenian architecture of the Middle Ages, at least on the exterior.

The Holy Trinity Church is located in the heart of downtown Fresno, about 140 miles east of San Francisco, and is part of the Fresno historic district.  The St. Paul Armenian Chuch is in the suburbs about five miles to the north.  Both churches are open daily.  However, no visitor information was available at the time of this writing.  Web: www.holytrinityfresno.org (official website of Holy Trinity Church);  www.stpaulfresno.com (official website of St. Paul Armenian Church).