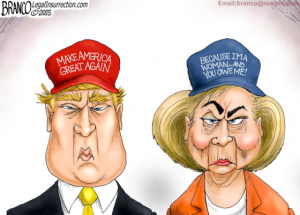 As the two major political parties wrap up their respective primary seasons, we are presented with what I personally believe could be the worst choice of presidential candidates ever presented to the American people.  On the left is an entrenched establishment politician with a sketchy track record who may soon be indicted for some very poor decisions made in her role as secretary of state.  On the right is a demagogic outsider whose blatant prejudicial rants echo of the tyrants of the 1930s.  Both of these candidates suffer from massive ego trips.

How the hell did we get here?”

Hillary Clinton and Donald Trump are the presumptive presidential nominees of the Democratic and Republican parties respectively due in large part to the massive problems caused by unrestricted campaign finance:  Clinton because of her access to massive amounts of political spending money, and Trump because of his anti-big money stance (at least until now).

One thing that the majority of Americans seem to agree on, regardless of where they stand on the political spectrum, is that money in politics is completely out of control.  And this absolutely has to change.

Except it almost certainly won’t.

Barring anything short of divine intervention, or possibly an actual armed revolution, money in politics is here to stay. The circle is all but closed.  Only major legislative action at the state and national levels can end the money madness, but since most elected politicians are now solidly in the pockets of donors, the donors will move heaven and earth (and spend whatever they have to) to prevent any such legislation from ever occurring.

This problem is endemic of a political process that has its roots in a fatal flaw in the Constitution of the United States.  It is a flaw rooted in something so small that it was all but completely overlook at the time of its inception.

The U.S. Constitution is the sacred basis of American democracy.  It has also been used as a model for many other nations in the creation of their own constitutions.  It was, in many ways, an historic achievement of the democratic process.

The Constitutional Convention of 1787 had seventy delegates, of which only 55 were present at the final drafting.  Only 39 of these signed it.  Only twelve of the original thirteen colonies were represented (Rhode Island did not have delegates present).  Among the articles of the Constitution was that it only required nine state governments to recognize it before it became law.

Between December 7, 1787 and June 21, 1788, nine states ratified the Constitution with no further changes required.  The collective vote in these nine states was 724 in favor, 362 against.  In short, the basis of all American democracy was agreed upon by 39 signatories and 724 favorable votes, or 763 people in total.  There was no general referendum of the four million or so people who resided in the colonies at the time, nor has there been a follow-up among the billion or so American citizens who have lived since then, except in the form of some amendments, very few of which actually altered the original document.

Actually, there was one general referendum on the United States Constitution, and that took place in Rhode Island in 1788, where it was soundly defeated by a margin of 11-1.

So that’s it.  The United States government was formed by only 763 people, with virtually no say by the hundreds of millions of people who have live in this country since then.  Why is that?

Because of article five of the Constitution, which indicates that:

There is no way for the people of the United States to directly change the Constitution.

That’s it.  The ultimate flaw in American democracy.  763 men decided on the entire basis of the federal government, without giving the people of the United States any direct recourse to changing it without going through the existing governmental structure.

The Founding Fathers never allowed for a government and political process so outrageously corrupt that it could no longer fix itself. It gave the people no legal resource to make laws that could bring an out of control government to heel.  Only the government can change itself.  I guess the thought in a democracy was that if you have a really ineffective or corrupt elected official, they could always be voted out.

According to the article five of the Constitution, the Constitution can be amended by one of two very similar ways.  The first way is that congress proposes amendments (requiring a two-thirds vote in each house) that must then be ratified by the legislatures of three-fourths of the states, almost all of which have two houses.

The second way is for two-thirds of the states to call for a constitutional convention, which then must be convened by congress, after which any amendment must be ratified by three fourths of the delegations.

There is no direct recourse to the American people.  Even if a majority of voters in three fourths of the states overwhelmingly supported a constitutional amendment to curb finance in the political process, or any other amendment for that matter, it would be an utterly pointless exercise.

Which brings us to today.  The American people desperately want change, and they are routinely denied it by politician after politician who promise to bring it.  And the resultant political process has left us saddled with some of the most disliked presidential candidates in American history.  And very few people believe that have any intention of bringing about change.

“They (the establishment political forces) are guarding every door, they are holding every key. But sooner or later, someone is going to have to challenge them.”