Tucked away in northern Alabama, a short detour off of I-65 about halfway between Birmingham and Huntsville, is one of the most spectacular collections of Christian folk art to be found in the United States.  This treasure trove of art is hidden away at the unassumingly named Ave Maria Grotto (www.avemariagrotto.com). Located on the grounds of the St. Bernard Abbey in Cullman, the Ave Maria Grotto is the result of nearly half a century of labor by a dedicated monk, Joseph Zoettl. 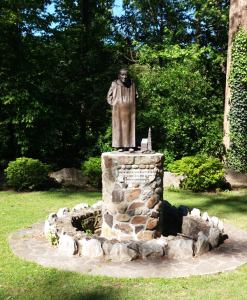 Brother Joseph was born in Bavaria in Germany in 1878.  He immigrated to the United States in the 1890s, settling in Alabama, where he studied to be a priest at the St. Bernard Abbey.  He later joined the community of the abbey as a monk, taking his vows in 1897.  Brother Joseph was assigned to work in the abbey’s power plant, where he apparently found himself with a considerable amount of free time.

Joseph probably had a deep desire to travel, and almost certainly dreamed of seeing the great places of the world.  Unable to actually travel, he instead developed an unusual hobby.  When not working, Joseph devoted his spare hours to the creation of miniature models of famous places.  His models consisted of a variety of largely Christian themes, from renowned churches to Biblical scenes.  These were set up on the abbey grounds and soon attracted the attention of visitors. 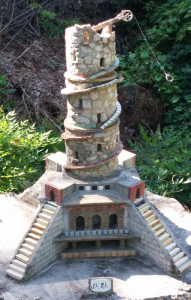 By 1934 the collection was so extensive and the number of visitors to the abbey growing so large that a new site was set aside on a hillside to display his works.  Brother Joseph continued to construct his models for the rest of his life, and by the time of his death in 1961 the collection had grown to well over a hundred buildings and scenes.  A few more were added in later years by Leo Schwaiger, who assisted Brother Joseph in his later years and who spent the next few decades caring for the displays.

The Ave Grotto is organized along a walkway jam-packed with Joseph Zoettl’s works.  All of the miniatures are constructed using materials that were either found on the abbey grounds or which were donated for free.  Donated materials came from all over the world and include everything imaginable, from stained glass to seashells to costume jewelry. 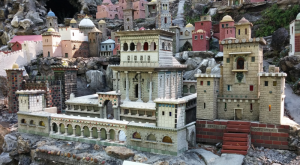 The vast majority of the models are of famous buildings from around the world, most of which Brother Joseph only ever saw in pictures.  Some of the churches recreated include the Basilica Cathedral of the Immaculate Conception in Mobile, the Abbey of Monte Cassino in Italy, the Shrine of Lourdes in France and even the Alamo.  Scenes from the Bible include the birth of Jesus in Bethlehem, the Tower of Babel and a recreation of the tomb of Daniel in Iran.

There are also breathtaking models of non-religious sites from around the world as well, including the Hanging Gardens of Babylon and the Statue of Liberty.  Brother Joseph even included scenes from his favorite childhood stories, such as Hansel and Gretel. 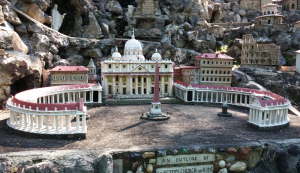 But by far the two most mind-blowing displays are those of Rome and Jerusalem.  These two massive dioramas, which flank the central grotto, are by far the largest.  Rome, also known as the Italian Section, has recreations of the Colosseum, the Pantheon, and most of the city’s major pilgrimage churches, all surrounding an immense model of St. Peter’s Basilica.  The latter is arguably one of the finest and most famous models on site (the dome of St. Peter’s was molded around an old bird cage).

Opposite Rome is the equally impressive Jerusalem section.  A recreation of the landmarks of the Holy City as they might have looked in the 1st century AD, buildings here include the Fortress of Antonia, the Dormition Abbey, the Tomb of Lazarus and of course, the Second Temple of Herod.  There are also scenes of Gethsemani, the Crucifixion and the Resurrection. 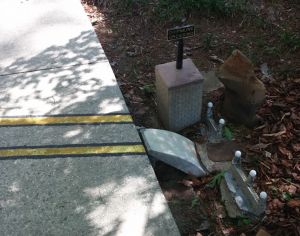 The centerpiece, located about halfway along the walk, is the actual grotto, a small cave in the hillside with a shrine to Our Lady of Prompt Succor. Brother Joseph fashioned the shrine, including much of the cave, featuring images of Mary, St. Benedict and St. Scholastica.  Even the odd looking stalactites were manufactured out of odd rocks and other materials.

At the very end of the path is a series of models of the great Marian shrines of the world. These include the Shrine of Jasna Gora in Poland; Our Lady of Guadalupe in Mexico; and the Basilica of Knock in Ireland.  These were largely executed by Leo Schwaiger.  Schwaiger was also responsible for the construction of the adorable and humorous ‘chipmunk crossing’ at the end of the tour.  I think Brother Joseph would have approved.