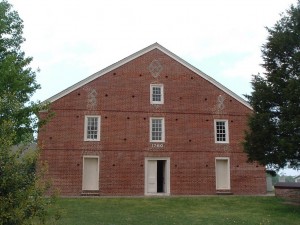 Barratt’s Chapel is the oldest Methodist Church still in use in the United States.  Although Methodism was introduced to America first in Georgia by John Wesley, some refer to Barratt’s Chapel as the Cradle of Methodism, in part because of its age but also in part due to post-Revolutionary events that transpired there.  It was built and named by and after Philip Barratt, who was instrumental to establishing the American Methodist Church in the post-colonial era.  Together with Barratt’s Hall, Barratt’s Chapel is arguably the most popular religious site in central Delaware.

John Wesley, the English-born founder of Methodism, introduced his brand of Christianity to the American colonies, specifically Georgia, in the 1730s.  By the outbreak of the American Revolution it had spread along the Atlantic Coast, become established as far north as the colony of Delaware, where it jostled with other more established branches of Christianity.

Just prior to the outbreak of the war, one of Wesley’s associates, Francis Asbury, emmigrated from England to Delaware to grow the Methodist Church there.  For well over the next decade, Asbury held the church together as war ravaged the surrounding area.  The early Methodists in Delaware managed to survive and even maintained their connections to the English Methodists after independence.

In 1784, Wesley decided to re-establish relations with the American Methodists and sent another friend, Thomas Coke, to Delaware to find and meet with Asbury.  He arrived in November, and the two men met in the chapel.  Coke then administered communions and baptisms, the first time an ordained Methodist minister did so on American soil.

The next month on Christmas Day, Coke, Asbury and other Methodist ministers met in nearby Baltimore, where the Methodist Episcopal Church was formally established.  Because of its historic importance, Barratt’s Chapel was declared a heritage landmark of the Church.  While it is no longer in use for regular worship, it is still used for several annual special occasions, as well as weddings and other events.

Barratt’s Chapel was originally constructed in 1780, with several renovations in the early 19th century.  The final structure as it now stands dates back to 1842.  A large but otherwise very simple brick structure, it can easily be confused with a typical, two story colonial-era residence.  There is no bell tower or other obvious details that indicate that the building is a church.  Only the surrounding graveyard reflects the building’s nature.

The interior is another matter.  The main room of the meeting house is a two-story sanctuary, simply but elegantly built-out.  Although the sanctuary is not in regular use, it is kept up year-round.  Also on site is the Barratt’s Chapel Museum, which features exhibits and artifacts on the early Methodist Church.

Barratt’s Chapel is unique among America’s most historic churches in that it is not located in the heart of a major city or town, or even anywhere remotely close to a village.  Built on the old Barratt homestead, it is surrounded by farms and open fields in every direction.  It is approximately ten miles south of Dover and approximately 50 miles east of Baltimore. It is open year round on Saturdays and Sundays from 1:30pm-4:30pm.  There is no cost of admission.  Web: www.barrattschapel.org (official website).

The Barratt’s Chapel national historic site includes Barratt’s Hall, the home of Philip Barratt where early Methodist meetings were held.  The tomb of Francis Asbury is in Mount Olivet Cemetery in Baltimore, close to the gravesites of other prominent Methodist clergymen including John Emory.