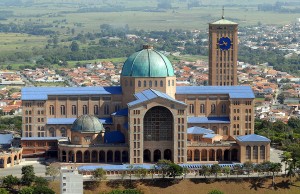 The country of Brazil, the most populous in Latin America, is home to the world’s largest population of Catholics.  With more than one hundred and twenty million, Brazil is home to over one in every ten Catholics worldwide.  It is not surprising that such a large populace would come up with many of its own religious traditions and sacred places.  The greatest of these, without a doubt, is the Shrine of Our Lady of Aparedica, the most famous Marian shrine in the Americas and the second most famous in the world with the exception of Lourdes in France.  As many as seven million visitors make the pilgrimage to Aparecida annually, making it the most visited Christian shrine of any denomination in the Western Hemisphere.

In 1717, a statue of the Virgin Mary was netted out of water during a fishing expedition near the small Brazilian fishing village of Guarantinequeta.  The previously unsuccessful outing suddenly yielded a great quantity of fish, just in time to prepare a banquet for a visiting nobleman.  The immense success of the fishing trip was attributed to the rescue of the statue and held to be miracle of the Virgin Mary.  One of the fishermen, Felipe Pedroso, kept the icon and brought it back to his village where it was soon highly venerated.

Later, other miracles were attributed to the statue, and word began to spread throughout Brazil.  In 1732 a shrine was erected in nearby Porto Itaguassu to accommodate the pilgrims flocking to see the icon.  It was soon apparent that the small structure would be insufficient.  A larger church was built nearby in Aparacida, where the icon was moved in 1745.  Eventually, the flood of religious visitors necessitated a full-fledged cathedral, and in the 1830’s and 1840’s a massive new church was constructed to accommodate the statue.  It continued to reside here throughout the 19th and 20th centuries.

In the early 1900s, the Catholic Church formally recognized the Shrine of Our Lady of Aparecida as a full-fledged Marian site, and in 1908 the cathedral was designated as a basilica.  The town around the shrine grew into a thriving city.  Finally, in 1929, the Virgin of Aparecida officially became the patron saint of Brazil.  By the 1980’s, Aparecida had become the most popular pilgrimage destination in the Western Hemisphere.  An even bigger cathedral was built to accommodate the crowds, and is now the largest Marian shrine in the world, as well as the world’s third largest cathedral in general.

Today the Shrine of Our Lady of Aparecida is the most venerated Christian site outside of Europe and the Holy Land.  This is due primarily to the vast Catholic population which lives within visiting distance of the shrine.  In 1995 a minor interdenominational controversy took place in which a Pentacostal minister kicked a clay copy of the statue, decrying it as an ugly object to which God should not be compared.  Hopefully this does not foreshadow future difficulties between Brazil’s Roman Catholics and its growing Protestant population.

The Basilica of Aparecida is one of the largest buildings in Latin America.  Unlike many newly built Christian shrines, this basilica was not constructed on the site of an earlier church, and does not incorporate any earlier features.  The cathedral is laid out with a traditional cross-shaped sanctuary, but is otherwise a thoroughly modern structure.  Nevertheless it is generally more attractive than typical late-20th century church construction.  The dominant exterior features are the massive clocktower, the tallest structure in the city, and the immense dome, one of the largest in the Americas.

The church interior is similarly large, with seating for tens of thousands of worshipers and pilgrims.  Hundreds of enormous windows give the basilica a light and airy feel.  The focal point is the Shrine of Our Lady of Aparecida, where the famous statue is kept.  The statue of Mary, believed to have been the work of a monk named Frei Agostino de Jesus, probably dates back to the middle of the 17th century.  Over the centuries it has been refurbished, adorned in gold-trimmed robes, and topped off with a crown.  It is displayed daily.

The Basilica of Aparecida is located in the heart of the city of Aparecida, roughly halfway between the cities of Sao Paulo and Rio de Janeiro.  Aparecida has a very large tourist infrastructure, making the basilica easy to visit, possibly as a daytrip from the former or an overnight trip from the latter.  The sanctuary is open Mondays through Fridays from 7:00am-4:00pm, Saturdays from 6:30am-7:00pm, and Sundays from 5:30am-6:00pm.  There is no cost of admission, but donations are highly encouraged.  Web: www.cidadedesaopaulo.com (official tourism website of Sao Paulo state)

Most of the religious locations connected to Our Lady of Aparecida are the previously mentioned churches and cathedrals where the icon formerly resided.  One of the most visited is the Old Basilica of Aparecida, considered by many traditionalists to be more genuine and beautiful than its modern successor.