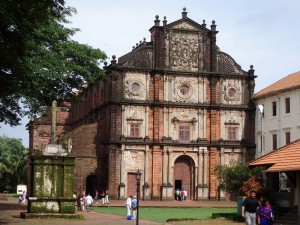 While Chennai and the Tamil Nadu province boast India’s oldest Christian communities, it was in Goa that European Christianity made its first real major appearance in the Subcontinent.  After the Portuguese established Goa as their primary commercial center in India, Catholic missionaries soon followed.  By the time Francis Xavier arrived, Goa was already the de-facto center of Catholicism in India and Asia.  Many of Asia’s oldest and most beautiful churches are located in and around Goa, and when Francis Xavier’s body was returned here after his last missionary trip to China, the city became an overnight pilgrimage sensation.  The Basilica of Bom Jesus is part of the Churches and Convents of Goa UNESCO World Heritage Site.

Francis Xavier was among the most important and successful Christian missionaries since Paul was active in the 1st century and he is credited with introducing Christianity to almost every corner of the Far East.  He was born in Spain in 1506 and received his theological training in Paris.  By the time he was in his twenties, Francis was part of a close-knit group of clergymen that included a number of men who would go on to become some of the most important and influential theologians of the 16th century.  One of these was Ignatius Loyalla, and together along with seven others founded the Society of Jesus, or Jesuits, in 1534.  The Jesuits were the last major monastic order to be established, and were incredibly influential in the missionary work of the Spanish and Portuguese empires of the 16th and 17th centuries.

In 1540, the King of Portugal requested the aid of the Jesuits in his colonial endeavors.  His goal was to make a religious end-run around the Muslims who were then expanding down the Malay Peninsula.  Francis Xavier responded, and the next year he set out.  His first stop was in the Portuguese colony of Mozambique, where he spent half a year evangelizing and preparing for the trip to Asia.  In 1542 he arrived in Goa, which he subsequently made the base of his missionary operations.  During the next three years he traveled throughout Southern India and Sri Lanka spreading the Gospel.  It is likely that he visited the Shrine of St. Thomas around this time.

The next phase of his missionary travels took him to Malaysia and Indonesia.  He spent a good portion of his time here working in Malacca, which sometimes put him at odds with Islamic missionaries who were working the same territory.  Thanks in part to the Portuguese military command of the area, Francis Xavier had considerable success.  He also visited a number of the Moluccan Islands in eastern Indonesia before returning to Goa, where he remained until 1549.  Francis Xavier’s missionary work then took him to China and Japan.

At the urging of a Japanese acquaintance, he traveled to Canton and from there to Japan where he spent two years evangelizing.  This was followed by a few months’ rest and a return to China.  But exhausted from restless years in foreign lands, Francis Xavier died enroute on the island of Shagchuan.  After a brief sojourn in Malacca, his body was returned to Goa, where it resides to the present day.  Although none of the countries that Francis Xavier visited was destined to have a Christian majority, many of the communities he founded are still thriving.  It is quite possible that many Asian countries would have no Christians today if it weren’t for his tireless efforts.  At the end of the 16th century, the massive Basilica of Bom Jesus was constructed to house Francis Xavier’s mausoleum.  It is now one of the most popular Catholic pilgrimage destinations in Southern Asia.

The Basilica of Bom Jesus is an absolutely magnificent structure, much more along the lines of what a pilgrim might expect than the modernistic Basilica of St. Thomas in nearby Chennai.  Built at the height of Portuguese power and affluence in the colonial period, the Basilica of Bom Jesus is one of the most richly adorned churches in Asia.  The cathedral’s impressive façade is distinctly European, but with a touch of classical Indian design that make it one of the most architecturally unique buildings in Christendom.

The interior of the church consists of a single enormous vaulted nave constructed in white marble and lavishly trimmed in gold and other valuable materials.  While the church lacks the typical cross-shaped layout, a large alcove dominates the space behind the altar.  Much of the far wall of this alcove is covered with a large, iconic painting of St. Francis Xavier.  The silver-bedecked tomb of the famous missionary lies within as well.  Francis Xavier’s remains, while partly veiled, are still openly displayed to the public.

The Basilica of Bom Jesus is located amidst expansive gardens and forests outside of the city of Goa, approximately one thousand miles south of Delhi on India’s west coast.  While not easily accessible, there are plenty of tourism options to get pilgrims out to the site.  As of this writing, visitor information was not available.  Web: http://bomjesus.org (official website)

During their stay in Goa, the Portuguese littered the city with cathedrals and churches.  The Church of Mary of the Immaculate Conception just west of Goa is the oldest European Church in India, not counting the remains of a handful of ancient Oriental Orthodox and Assyrian structures.  The Cathedral of St. Catherine de Sa is Goa’s largest cathedral and one of the largest in Asia.  It houses the Golden Bell, also believed to be the largest in Asia.  The nearby Convent of St. Monica Christon is home to a cross that is claimed to have miraculously bled in 1636.