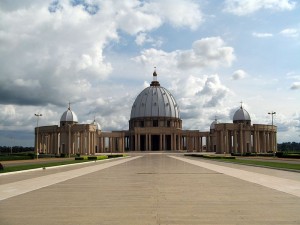 The city of Yamoussoukro in the Ivory Coast is the unlikely home to one of the world’s record-setting Christian structures.  In this small city, seemingly in the middle of nowhere, you will find the world’s largest church by some standards: the Basilica of Our Lady of Peace.  Loosely modeled on St. Peter’s Basilica in Rome, it features the largest dome in Africa and one of the largest domes built anywhere in the 20th century.  By any standard it is among the world’s biggest church buildings, a testament to Catholicism in French West Africa, and also to the ego of Felix Houphouet-Boigny, the president who virtually bankrupted the Ivory Coast while building it.  Despite the cost, the basilica has become a source of national pride for the entire country, not just Catholics.  Today it is the most popular Christian pilgrimage site in West Africa.

The first contact that West Africa had with Christianity was the arrival of European explorers in the late 15th century.  Before that, most of the population of the region practiced either Islam or one of a number of indigenous religions.  Even after Africa’s western coasts were settled by Portuguese and Dutch colonists, it was more than a century before Christianity began to make inroads into Sub-Saharan Africa.  This was especially true in the region of the Ivory Coast, which was largely ignored by Europeans until the French showed up in the mid-19th century.

With the arrival of large numbers of French colonists came the arrival of large numbers of Christian missionaries.  The Ivory Coast, like many other European colonies in Africa, witnessed large numbers of Christian conversions at this time.  However, because of France’s strong commitment to religious freedom, conversions were strictly voluntary, unlike in many other places where they were highly encouraged.  As a result the country’s population was never more than a third Christian.  However, this did not stop the Ivory Coast’s first independent president, Felix Houphouet-Boigny, from constructing the largest Christian church on the African continent.

Felix Houphouet-Boigny was one of the first major post-colonial leaders in Africa.  His presidency, which lasted from 1959 until his death in 1993, was one of the most successful and prosperous in modern African history.  A devout catholic, one of his great architectural contributions to the Ivory Coast, and to Africa, was the Basilica of Our Lady of Peace.  Houphouet-Boigny desired that the new cathedral be among the largest in the world, as a showpiece of his new capital in Yamoussoukro; as a tribute to the Roman Catholic Church; as a cultural challenge to his country’s Islamic population; and undoubtedly as a boost to his own legacy.

Construction of the imposing edifice took a mere five years, and was completed in 1990.  Upon its completion, Felix Houphouet-Boigny donated it to the Roman Catholic Church, and Pope John Paul II himself traveled to the Ivory Coast in order to personally consecrate the new basilica.  In the mere two decades since its completion, the Basilica of Our Lady of Peace has become a national symbol of the Ivory Coast and one of the most important Roman Catholic shrines in Sub-Saharan Africa.  It is now one of West Africa most popular religious destinations.

The Basilica of Our Lady of Peace is not only among the largest Christian shrines covered in this book. At barely two decades old, it is also the youngest.  The building is indeed massive, but its ranking is a matter of debate.  The exterior grounds include immense covered colonnades and plazas which can accommodate great crowds.  If this is included in the total area of the church, then it is in fact larger than St. Peter’s Basilica in Rome. However, if just the interior area is considered, then it would be the 9th largest church in the world, though still the largest in Africa by far.

The exterior of the basilica is an impressive sight.  The main sanctuary is a towering marble affair crowned by one of the world’s largest domes.  The construction of the dome was something of a controversy, as its height was originally planned to be taller than that of St. Peter’s in Rome.  At the request of the Pope it was lowered.  Nevertheless it is topped off by a tall cross which puts it at more than five hundred feet in height, making it one of the tallest freestanding buildings on the African continent.  The interior of the basilica is adorned by some of the finest late-20th century stained glass windows.  In a self-indulgent tribute, Houphouet-Boigny had his image worked into the one of the windows as one of the three adoring Magi.

The Basilica of Our Lady of Peace is the architectural centerpiece of Yamoussoukro.  However, although Yamoussoukro is the national capital, it is still in most respects the Ivory Coast’s second city after Abidjan.  Tourism and travel infrastructure is minimal, and a visit to Yamoussoukro might require an overnight trip from Abidjan.  The basilica is open daily from 9:00am-5:30pm (closed for lunch from noon-2:00pm).  There is no charge for admission.  Web: www.ndpbasilique.org (official website)

Despite its architectural and national significance, the Basilica of Our Lady of Peace is not technically the city’s chief catholic church.  That honor goes to the Cathedral of St. Augustine.