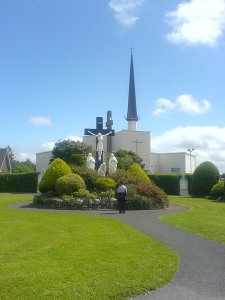 The Basilica of Our Lady in Knock, Ireland is a beloved catholic shrine in a country that takes its Catholic heritage very seriously.  It is also the most popular Marian shrine in the British Isles.  Like Lourdes, it is famous for a miraculous appearance of the Virgin Mary in the 19th century.  Unlike Lourdes, there were many witnesses to the event.  After years of inquiries, Catholic authorities confirmed the miraculous vision as genuine and Irish pilgrims began to swarm to the site.  The Basilica of Our Lady is now considered Ireland’s most important catholic shrine, and the number of visitors to the cathedral increases by the year.

The renowned Knock Shrine began simply enough.  On the evening of August 21, 1879, a certain Mary McLoughlin, a servant in the household of one of the town’s clergymen, was strolling past the church on her way to visit a nearby acquaintance.  As she walked past, a strange site caught her eye: several small figures appeared upon the church gable dressed in Biblical garb.  Thinking at first that they were decorations or statues recently added to the church, she didn’t give the matter a second thought, and continued on her way.

However, she returned a short while later with her friend to close up the church, and it was then that they realized that something was amiss.  Both witnessed the figures as though as in a vision.  Amazed, they began to gather others to see the strange sight.  Within the hour more than a dozen people had also witnessed the strange vision, which they were now certain was not a decoration of any sort.  Based on the appearance of the strange figures, the townsfolk concluded that two of the figures were the Virgin Mary and her husband Joseph, and that a third was John the Apostle.  The vision also included a lamb sitting quietly on an altar.

The vision lasted well into the night, all the while Mary McLoughlin and her companions prayed.  That might have been the end of it, but a Church-sponsored inquiry into the matter concluded that the vision had been real, though it was unclear exactly what its purpose was.  The story of the vision became an overnight sensation, and visitors began arriving from all over, including as far away as America.  Even Queen Victoria took an interest, personally requesting a report on the strange occurrence.

Knock soon became Ireland’s premier pilgrimage destination.  It has remained such ever since, and grew in popularity throughout the early 1900s.  By the mid- to late-20th century, Knock was receiving so many pilgrims that a new church, the Basilica of Our Lady, was built to accommodate them all.  Even Pope John Paul II made a visit to Knock.  Despite its renown as one of the world’s most popular Marian shrines, the Basilica of Our Lady of Knock is not known for miraculous healings or other such phenomenon.

The Basilica of Our Lady is located in the small town of Knock in the far west of Ireland.  The shrine consists of a large white modern structure that incorporates elements of the original church, known as the Church of the Apparation.  The basilica is laid out in an unusual circular pattern with the main entrance facing the plaza.  A tall, narrow steeple rises from the center of the building.  Among the exterior architectural elements of the basilica are stones from the original church, which pilgrims traditionally touch when visiting.  A fifty-foot cross towers above the plaza in front of the basilica.

The focus of the interior of the church is a series of statues which recreate the original vision.  The centerpiece of the tableaux is actually not the Virgin Mary, but rather the altar with the Lamb of God standing upon it.  A cross rises from the altar, and the whole is surrounded by angels.  A trio of figures stands to the altar’s left, and includes Joseph the Carpenter and John the Apostle.  The Virgin Mary, crowned in gold, stands between them.

The Basilica of Our Lady is located close to the center of Knock, separated from the town’s main street by a broad plaza.  Although Knock is located in Ireland’s isolated western country, over a hundred miles from Dublin or Belfast, hundreds of thousands of pilgrims still manage to make the visit every year.  The basilica and town can be visited as a day trip from Galway, or a long day trip or overnight from Dublin.  The church is open year-round.  There is no charge for admission.  Web: www.knock-shrine.ie (official website)

While Mayo County in Western Ireland is all about the Basilica of Our Lady in Knock, there is at least one other place worth mentioning.  That is Croagh Patrick in nearby Westport, the tall hill where it is believed that Patrick prayed for all of the snakes to leave Ireland.