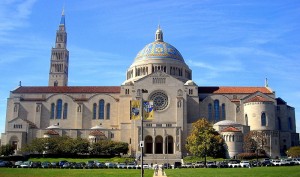 The Basilica of the National Shrine of the Immaculate Conception holds the record for having the longest name of any cathedral in America.  Seriously though; this cathedral is the largest Catholic church building in the United States, and was once, for a brief time, the largest Christian church in the Western Hemisphere.  Although it is not the oldest cathedral in America, or even the seat of an Archdioscese, its prominence in the nation’s capital, as well as its historical connections to John Carroll, makes it the religious institution of choice for many prominent Catholic government officials and foreign visitors.  After St. Patrick’s Cathedral in New York City, the National Shrine of the Immaculate Conception is the most popular Catholic pilgrimage destination in the United States.

In the wake of the American Revolution, one of the first tasks undertaken by the newly formed government was to establish the Bill of Rights, which among other things included a guaranty of freedom of religion.  In a land of Protestants, this was of particular importance to the country’s sizeable Catholic population.  In order to cement the newly established freedoms and get the Church’s relations with the new country off to a good start, John Carroll, the first Archbishop in the United States, formally blessed the new country with Our Lady of the Immaculate Conception as its patron. 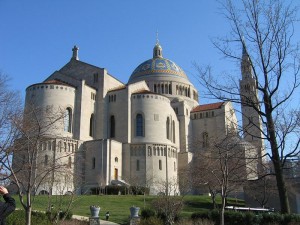 John Carroll was an active religious leader during the years of the American Revolution.  His cousin, Charles Carroll, had signed the Declaration of Independence, an event immortalized in the movie National Treasure.  John Carroll was the head of the Catholic Church in America from 1792 until his death in 1813.  During his lifetime he was also responsible for establishing the first cathedral in America as well as Georgetown University.

In 1847 the Papacy formally confirmed the blessing.  In the later part of the 19th century, America’s Catholic leaders began to envision a great national cathedral dedicated to Our Lady of the Immaculate Conception.  However, the project wasn’t approved until 1913.  The project was undertaken under the auspices of the Catholic University of America, who donated the land for the massive new cathedral. 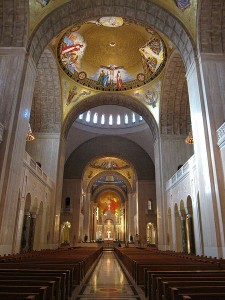 The cornerstone was laid in 1919, with ten thousand people in attendance, including many governmental officials and foreign dignataries.  Construction proceeded in a friendly rivalry with the Episcopalean Washington National Cathedral, which had started a few years earlier.  Despite delays during the Great Depression and World War II, the Basilica of the Immaculate Conception was finished first, and for the next three decades was the largest completed church in the United States.  It is now a regular stop for Popes and other Vatican officials making state visits to the American capital.

The Basilica of the National Shrine of the Immaculate Conception is one of the most outstanding buildings in a city full of outstanding buildings.  For a few years it was the largest cathedral in the Western Hemisphere.  It has since been passed by four other cathedrals.  However it is still the largest Catholic church in the United States, and the tallest building in Washington DC.  Architecturally it is a cross between neo-Byzantine and early-20th century modern.  The two major external features are the belltower, which resembles the minaret of a West African mosque; and the immense dome, one of the largest in the world, which is as elaborately decorated as a Faberge Easter Egg. 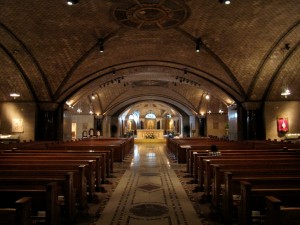 The interior is a masterpiece in white marble.  Design elements are very similar to those which are found in many of Washington’s governmental buildings that were erected in the late 19th and early 20th centuries.  The focus is on immensity and elegance, with minimal decorative artwork, most of which is reserved for the ceilings and dome.  For American Catholic pilgrims, the highlight of the church is the crypt, where John Carroll was re-interred during the 20th century.

The Basilica of the National Shrine of the Immaculate Conception is located on the south side of the campus of the Catholic University of America, approximately four miles north of the Capitol Building.  It is open daily from 7:00am-6:00pm (later hours in Summer).  Admission is free.  Web: www.nationalshrine.com (official website)

Interestingly, the Basilica of the National Shrine of the Immaculate Conception is not actually the official church of the Archdiocese of Washington DC.  That honor goes to the Cathedral of St. Matthew the Apostle, named in honor of the patron saint of civil servants as Matthew was a tax collector.  Nearby is the Catholic University of America, which is home to many American Catholic organizations and is nicknamed Little Rome.  Also in Washington D.C. is the National Museum of Catholic Art and History, recently relocated from New York City.