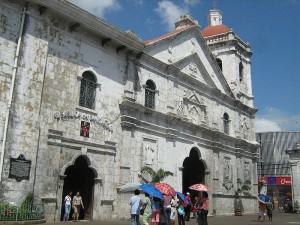 Cebu City is the Pacific Rim’s equivalent to Santo Domingo in the Caribbean.  Christianity was established here early in the 16th century by Spanish explorers and missionaries, and it was from here that the Catholic Church eventually spread throughout the Philippine Islands, and later into much of the rest of the South Pacific.  The Philippines went on to become the most populous Catholic, and Christian, nation in the Far East.  The Basilica of Santo Nino is the oldest church in the Philippines and in the Pacific, and is home to several important church artifacts and icons.  Cebu City is probably the most historic Christian site east of India and west of the Americas.

The historical parallels between Santo Domingo and Cebu City are quite striking.  Each boasted vibrant pre-European cultures; each was ‘discovered’ by one of Europe’s two greatest explorers, Columbus and Magellan, respectively; each served briefly as Spanish colonial capitals in their respective archipelagos; and each saw the birthplace of Catholicism in their regions.  However, one major difference between the two islands is that the pre-European inhabitants of the Philippines had already had a long history of contact with the great empires of Eastern Asia.

The Philippines had long been closely tied by the great sea trade routes to China and Japan and to the north and India and Arabia to the west.  By the time Magellan arrived in 1521, he was greeted with less shock by the local population than Columbus had been in the West Indies.  Magellan and his crew soon found themselves at odds with the unimpressed local chieftain, and the great explorer was subsequently killed.  When fresh waves of Spanish conquistadors arrived a few decades later, they discovered two treasures that Magellan had left behind: the cross which he had set up in honor of the Church, and a small icon of the Baby Jesus that had been presented to a local leader’s wife.

Soon after their arrival, they established the Basilica of Santo Nino in honor of Magellan’s icon and cross.  It was the first major Catholic church to be built in the Pacific rim.  As Catholicism grew in the area, so to do did the importance of the Basilica.  In 1571 the center of Spanish colonial administration was moved to Manila, and Cebu City became the Philippines’ second city.  However, although its political importance waned, Cebu City remained as religiously important as ever.

Over the last four centuries, even though much larger cathedrals have since been founded throughout the country, the Basilica of Santo Nino is still the Philippines’ great historic Christian treasure.  Today, after nearly five hundred years, Cebu City remains the heart of Catholicism in the Pacific Rim.  Pilgrims continue to flock to the Philippines’ oldest city to see the Cross of Magellan and the Icon of Santo Nino de Cebu, among the most popular Christian artifacts in Australasia.

The Basilica of Santo Nino, also known as the Church of St. Augustine, is an excellent example of 16th century Spanish-colonial architecture.  Not particularly large by today’s standards, it was one of the largest churches in the Pacific for the better part of a century.  The interior of the basilica is impressive and decorative.  A large screen behind the main altar displays a collection of artwork and artifacts.  The famous Icon of Santo Nino de Cebu occupies the centermost shelf.

Just out in front of the Basilica is a small shrine displaying Magellan’s Cross.  This cross is actually a replica – what’s left of the original is well guarded, to protect it from further abuse by souvenir seekers.  Although the shrine is separate from the Basilica, it features its own beautiful architecture and artwork, including a mural depicting early Christian converts.

The Basilica of Santo Nino is located not too far from the cathedral in the heart of Cebu City, about three hundred and fifty miles south of Manila.  The cathedral is open daily (visiting hours were not available as of this writing).  Admission is free.  Web: http://basilicasantonino.org.ph (official website)