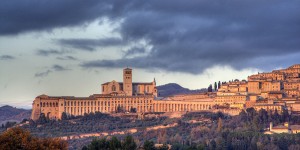 Francis of Assisi is one of those luminaries of the Catholic Church whose name, like Anthony and Benedict, is virtually synonymous with monasticism.  The Order of Friars Minor (Franciscans), which he founded, grew to become one of the greatest medieval monastic orders.  One of the most honored men of his day, he was canonized within two years of his death and a cathedral was built in Assisi in his honor within a decade.  The Basilica of Assisi served for a time as the headquarters of the order and as a result Assisi became one of the great centers of Christian learning during the late Middle Ages.  Its convenient location north of Rome attracted many overland pilgrims traveling through Italy during the Middle Ages.  Today it is one of the world’s most popular and visited monasteries.  The Basilica of St. Francis in Assisi is a UNESCO World Heritage Site.

Francis of Assisi was born into a reasonably well-off family, and spent most of his early years alternately enjoying the finer things in life and condemning them.  By the time he turned twenty he had already spent much time soul-searching, which included service in the military, and ultimately decided on a life with the Church.  Following a pilgrimage to Rome, Francis repudiated his family’s wealth, and turned to a life of poverty.  As a practical mission and to make a poor living, he took to restoring church buildings in and around Assisi.

In 1209 Francis formalized his personal beliefs into an even stricter regimen of poverty and sacrifice.  He went about the town and countryside in bare feet preaching the Gospel.  Within a year he had a small following.  These people lived together in an abandoned house, but spent most of their time emulating Francis’ example.  In 1209 Francis led his group to Rome, where they petitioned the Pope to be recognized as an order.  His petition was granted, and soon new disciples were flocking to join.  Over the next decade Francis worked diligently to continue preaching his message, and new monasteries began to spring up all over Europe, including those of the associated female Order of Poor Dames.

In later years, Francis went on a heroic journey to the Holy Land, where he preached in Islamic Egypt, fought in the Crusades and visited the Holy Sites of Palestine.  He returned to Italy in 1220, and spent much of the remainder of his life organizing his increasingly popular brotherhood.  In 1223 the Rule of the Franciscans was completed.  According to tradition, Francis received the Stigmata soon afterwards.  By the time Francis of Assisi passed away in 1226, he had established one of Christianity’s largest and most energetic monastic organizations.

Unfortunately, the Franciscans were susceptible to the usual petty rivalries that plague such brotherhoods when they grow too large, and as a result the Order went through several centuries of infighting and disunity after its founder’s death.  Because of this the Franciscans were overshadowed by their contemporaries, the Dominicans.  After the Reformation, most of what was left of the Franciscans was consolidated.  The friary at Assisi and the basilica that was built there shortly after his death have for the last eight centuries remained both the spiritual and political heart of the order as well as one of the world’s most beautiful monasteries.  It remains a popular monastic retreat.

Built on a hill overlooking the town of Assisi, the Basilica of St. Francis and the neighboring friary are more than worthy of their setting.  It is easy to see why the beautiful spot became a favorite of Francis.  The white brick complex actually consists of an upper and lower basilica, the latter containing the crypt.  Among the great artists who contributed their efforts to the church was Giotto Di Bondone.  In 1818 St. Francis’ stone and iron tomb was disinterred and put on display in the crypt.  In addition to Francis, five other important early Franciscans are buried here, including Jacopa dei Settesoli, a woman who funded much of the Order’s early activities.

Next door to the basilica is the friary, one of the largest and most magnificent monasteries in Europe.  It surrounds most of the basilica like a great columned Roman villa.  Constructed of white and pink marble and other expensive materials, the display of wealth at the friary was partly responsible for the order’s infighting.  Much of the wealth used to improve the friary came from Pope Sixtus IV, who himself had once spent time as a Franciscan.  Among the monastery’s treasures is one of Europe’s largest medieval libraries as well as a substantial collection of Christian art.

The Basilica of St. Francis overlooks Assisi, a small town about a hundred miles north of Rome.  It is accessible by public transportation or a long uphill walk from the center of town.  The basilica and crypt is open daily from 6:00am-7:00pm.  There is no admission charge.  Web: www.sanfrancescoassisi.org (official website)

St. Francis was apparently fond of his hometown, and made a regular habit of visiting many of its people and places.  The Chapel of St. Mary of the Angels just outside of Assisi, which he helped to repair during his early ministry, was one of his favorite haunts.  While St. Francis was buried in his own church on the hillside, the people of town could not bear to part with his effects.  The Basilica of Santa Chiara now claims his only possessions, a tunic and a pair of sandals.