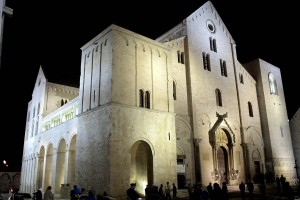 Other than the fact that St. Nicholas’ body was moved here in the 11th century, Bari has virtually nothing to do with the great theologian.  That said, the presence of the saint’s relics has prompted the city’s leaders to bequeath Bari with the nickname The City of Santa Claus, a claim challenged by St. Nicholas’ home cities of Patara and Myra in Turkey, not to mention the Christmas market cities in Germany, the North Pole cities in Scandinavia & Canada, Macy’s Department Store in New York City, etc..  Myra in particular is making every effort to become the world’s most popular Santa Claus pilgrimage destination.  Regardless of which city is the true city of Santa Claus, it is Bari that is currently home to the venerated saint’s relic and which receives the lion’s share of pilgrims that honor the saint.

Since the earliest days of the Church, possession of the relic of a major saint has added great prestige to a cathedral and its city.  For the most part early saints, when they were available, were buried near their place of death or otherwise moved to a place of greater importance, or at least accesibility.  The Islamic conquest of the Middle East prompted a mad scramble across the Mediterranean world to acquire saintly relics and move them to safer locations in the west.  Not infrequently this was accomplished by extraordinary efforts, including thievery.  Such was the case with the body of St. Nicholas.

After the Battle of Manzikert in 1071 AD, the victorious Seljuk Turks swarmed into Asia Minor.  According to tradition, even as the Turks arrived in Myra and started ransacking the city, enterprising sailors from Bari rushed to the cathedral, bullied and drove out the monks, and made off with the body of Nicholas.  The act was later semi-officially sanctioned by the Roman Catholic Church, both because it probably saved the relic from destruction, but also because it annoyed the Patriarch of Constantinople. 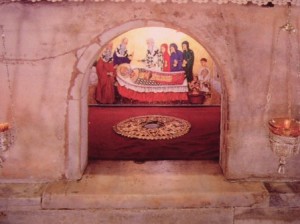 The City of Bari, meanwhile, had spent more than two centuries under Byzantine occupation, and had just been liberated by the Normans in the same year.  In celebration of the Byzantines having been driven out, the people and leaders of Bari gladly received the relic.  Shortly thereafter, as if to emphasize the city’s Catholic affiliation, an immense cathedral was built to house his body.  Bari’s popularity reached its peak during the Crusades, when thousands of Christians passed through Italy’s ports on the way to the Holy Land.  Many of these stopped and visited the shrine while in Bari.  One of these was Peter the Hermit, who visited the city and preached the First Crusade by the Tomb of St. Nicholas in 1095.

For many Crusaders over the next two centuries, Bari was the last European City that they would ever see.  As the wars in the Holy Land drew to a close, so too did Bari’s importance as a port and its popularity among pilgrims.  By the time of the Reformation and the Age of Exploration, Italy was politically shattered.  Bari, at the end of the Italian Peninsula, became little more than a backwater.  Religious visitors to the basilica slowed to a trickle.  This state of affairs continued until the second half of the 19th century, when Bari recovered as a shipping center.  A slow but steady stream of pilgrims comes to visit the site every year, though not in nearly such numbers as medieval times.

Architecturally the Basilica of St. Nicholas is something of a cross between Byzantine and Gothic designs, due to the availability of both Byzantine and Norman architects in the city at the time of its construction.  The white brick cathedral is imposing but austere in appearance from the outside.  There are, however, a few relief pictures of Nicholas carved onto the outer walls.  A statue of Nicholas, donated to Bari by the Russian Orthodox Church in 2003, stands facing the cathedral from across the square.

The cathedral interior appears smaller than the outside would suggest due to the narrowness of the nave, the unusual central support arches and the soaring ceiling.  The ceiling was redone in the 17th century in a more lavish Renaissance style.  The walls, chapels and altar are all thoroughly adorned with a blend of Orthodox and Catholic artwork, icons and the like.  Beneath the main church is a smaller chapel and the crypt where the body of Nicholas is kept.

The Basilica of St. Nicholas is located close to the city center of Bari.  Although Bari is very accessible to the rest of Italy by train, it is more than three hundred miles from Rome and even further from Italy’s other tourist centers, usually necessitating a major, but worthwhile, effort to reach it.  As of this writing, visitor information was not available.  Web: www.basilicasannicolo.it (official website)