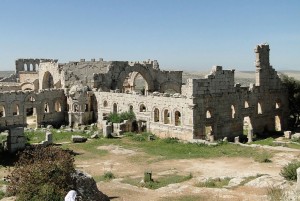 After Christianity became the official religion of the Roman Empire, die-hard Christians began to seek increasingly extreme ways to outdo each other in their public displays of humility towards God.  At first they expressed themselves by founding or entering monasteries, or seeking seclusion as hermits.  But as the 5th century dawned, more and more devotees sought to break away from the pack.  One classic example was Simeon the Stylite, who literally rose to new heights of self-affliction and isolation of sorts by living on top of tall pillars.  His demonstrations won him such a following that he became one of the Church’s all-time champions of self-deprivation.  By the time the Muslims arrived, however, such extreme shows of devotion were no longer in vogue, and Simeon’s Church, destroyed by an earthquake, and was abandoned.  It still draws curious visitors today who seek unconventional enlightenment.

The long history of Christianity in Aleppo closely parallels that of its more prominent Syrian counterpart, Damascus.  Like Damascus, Aleppo stands on one of the world’s oldest inhabited sites.  According to tradition, Abraham passed through Aleppo on his journey from Ur to Canaan.  It was conquered and occupied by the same succession of conquerors: Assyrians, Babylonians, Persians, Greeks, Seleucids, Romans and Byzantines.  It was during the Byzantine era that the area around Aleppo achieved its brief period of fame as the home of the Stylites.

Around the year 423 AD, a local man named Simeon decided to devote his life to ascetic Christian pursuits.  However, after flirtations with both monasticism and isolationism, Simeon decided to eschew tradition and spend his life as a ‘hermit’ in full view of the local citizenry.  Ascending a stone column, Simeon then proceeded to subject himself to all manner of deprivation and hardship.  At first he was regarded as a form of entertainment, but as time passed Simeon was taken more seriously.  Soon he had a considerable following, and word of his trials spread.  The citizens of Aleppo began to seek him out for inspiration and wisdom.

Later, new pillars were constructed for him, higher and smaller, so that he might make himself even more uncomfortable.  As his fame grew, a side trip to Aleppo became an almost mandatory detour for pilgrims on their way to the Holy Land.  At one point he became so popular that even high Church officials began to seek out his wisdom and blessing.  The Byzantine emperor himself eventually came and paid him a visit.  By the time of his death, Simeon was one of the most famous figures of his day.  An enormous church was constructed around his final pillar, and for many years continued to draw pilgrims to the area.  Meanwhile, disciples of Simeon known as Stylites had begun to appear all over the east, particularly in Syria, seeking to emulate their hero on pillars of their own.

However, by the time of the Muslims arrived in the 7th century, the Stylite craze was long over, and Aleppo’s importance as a Christian pilgrimage center had waned.  Today, Aleppo’s unusual heritage of the Stylites has been virtually lost to antiquity.  Most modern Christian scholars now regard the Stylists as eccentrics at best, exhibitionists at worst.  Critics of Simeon the Stylite point to the earthquake that destroyed the Church of St. Simeon less than a century after his death as a divine sign that perhaps the Stylites were not exactly the best examples of Christian living.  Nevertheless, the ruins of the church still draw a small but steady stream of the highly devout and the curious.

The Church of St. Simeon was once the most magnificent and most visited church in Syria. However, after it was laid waste by an earthquake in the 6th century, it was abandoned and never rebuilt.  Strangely, there has been no subsequent interest in ever re-using the site, leaving the ruins of the church in remarkably good condition.  While the great vaulted ceiling and most of the outer walls are long gone, major sections remain, including the nearly intact façade.  Archways lead to great vaults and alcoves long open to the sky.  Not many sites in Christendom, particularly in the east, are comparable.

The centerpiece of the church, of course, is the fabled pillar of St. Simeon, believed to be the last that the Stylite sat on and upon which he died.  Tradition holds that St. Simeon was still sitting atop the pillar as the massive vaulted Church was built around him.  An unsubstantiated, gruesome story even suggests that his corpse was left at the top until after the church’s completion.  Today, all that is left is the pedestal and the base of the pillar, about two meters in height.  Although it is discouraged, it has become a tradition for pilgrims to ascend what is left of the pillar and sit a spell.

The Church of St. Simeon is actually located about fifteen miles outside of Aleppo, and can be easily visited as a day trip.  The ruins of the church are an open site, and can theoretically be visited at any time.  The site is not easily accessible for the handicapped.  There is no cost of admission.  Web: Not currently available due to ongoing problems in the region

Today there is virtually nothing left of the Christian community in and around Aleppo.  However, like its counterpart in neighboring Damascus, the Great Mosque of Aleppo contains an odd, closely related Christian treasure: the Tomb of Zaccharias, the father of John the Baptist.