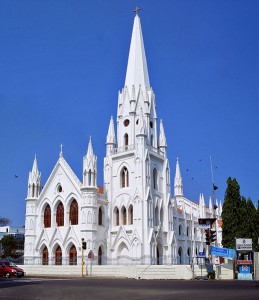 The Basilica of St. Thomas in India is one of the most important churches in Asia and yet one of Christanity’s least well-known major shrines.  This is due in large part to geography, as it is strange to think that a small Christian enclave thousands of miles to the east of the Holy Land and Europe is in possession of one of only a handful of known apostolic tombs.  Nevertheless it is arguably the second most likely true apostolic tomb after that of Peter, though most of Thomas’ corpse was removed many years ago.  Thanks to Chennai’s increased importance as one of India’s largest business centers, this long-forgotten shrine is now becoming a major destination for Christian tourists in India.  Today the Basilica is the top tourist site in eastern India for visiting Christians.

Thomas was one of the twelve Apostles that accompanied Jesus during his ministry in Galilee.  Although one of the less important Apostles from the Biblical narrative, his disbelief concerning Jesus’ resurrection after the crucifixion was one of the most memorable moments in the New Testament.  According to tradition, it was because of Thomas’ disbelief that he drew the lot that required him to travel to the distant lands of the east.  The Apocryphal books of Thomas are among the most extensive, and because of this we have more clues concerning Thomas’ later life than almost any of the other Apostles except perhaps Peter.

There are several variations of the stories of Thomas’ travels following the Apostolic Diaspora, not necessarily mutually exclusive.  All versions agree that he did go east, spending some time in Eastern Syria and Persia before continuing on to India.  Although this may seem geographically improbable, there is certainly evidence of a Christian community of Syriac origin in India dating possibly as far back as the 2nd century AD.  As the story goes, Thomas arrived in India around 52 AD, possibly as the slave of a Persian monarch or trader.  Thomas set about establishing a church, and soon the region boosted a sizeable Christian community.  He continued to live and preach among the Indians for almost a quarter of a century, probably outliving most of the other Apostles.

Unfortunately, Thomas was not destined to escape the violent fate of his brethren.  After years of living in peace, anti-Christian elements of the local community finally decided that Thomas’ following had grown dangerously large.  Thomas was chased out of his long-time cave home and pursued to the top of a mountain where he was caught and pierced through the heart with a lance.  After his death, his body was taken back to the town and buried.  Although it can be assumed that the rest of the Christian community also suffered persecution, virtually nothing is known with any certitude, even from Apocryphal documents.

Some time after his death, a church was built on or near Thomas’ grave.  This was replaced by a larger shrine around the 6th century AD, probably by Oriental or Assyrian Christians.  Portuguese explorers and missionaries discovered the shrine in the 17th century and replaced it with a Catholic structure.  The tomb containing Thomas’ relic, or at least part of it, was preserved within.  Another tradition suggests that Thomas’ body may have been moved in whole or in part back to Edessa sometime in the 4th century, and thence to Ortona in Italy.  In all likelihood the body has long since been split up, as was common practice at the time.  Today the Basilica of St. Thomas is highly venerated as both the holiest Christian site in India as well as one of the world’s only surviving Apostolic burial sites.

The various shrines of Thomas that have stood on this spot have gone through many makeovers and reconstructions throughout the centuries.  The first major church was completed here by the Portuguese in 1606 AD.  The current Basilica of St. Thomas was rebuilt at the end of the 19th century, and while it is a beautiful structure in and of itself, it somewhat lacks the venerable and majestic feel of other such basilicas.  Although technically a neo-Gothic structure, the white brickwork and substantial number of stained-glass windows give the Basilica of St. Thomas a considerably less-than-gothic feel.  A small museum at the church possesses Christian and colonial antiquities, which date from the Portuguese period.

The Basilica’s highlight, of course, is the Apostle’s Tomb.  However, even the cathedral’s caretakers disagree as to what is actually contained within.  Some hold that Thomas’ body is still there, while others believe that it has long since been removed and sent to Edessa or Ortona.  In all likelihood a bit of the body resides in each location.  The shrine chapel is located beneath the main church sanctuary, and is accessed by a separate entrance from the outside.  The sarcophagas where Thomas’ relic was interred is still within, and has not been opened for almost three hundred years.

The Basilica of St. Thomas is located in the Mylapore district of Chennai, about six miles south of downtown and close to the Bay of Bengal.  It is open every day from 6:00am-6:00pm.  There is no cost of admission.  Web: www.santhomechurch.com (official website)

Thomas spent the last twenty-five years or so of his life in the area around Chennai.  While his tomb is in the Cathedral, he actually lived outside of the city on Little St. Thomas Mount.  A cave on the hillside has been identified as the Apostle’s home, and a cross and some handprints are attributed to him.  Two churches, a 16th century Portuguese structure and the 20th century Our Lady of Health, commemorate Thomas’ life here.  In his last days, when Thomas was attacked by a mob, he fled to the nearby Greater St. Thomas Mount.  Here he was caught and killed.  Another 16th century Portuguese church was built over the spot where he died.  Inside is the highly venerated Bleeding Cross, which is said to turn red every year on the saint’s Indian feast day.